Home » Featured » Life With Krystel: My Cruise to Comzumel Mexico on The Carnival Paradise…Part One
Featured, Life with Armywife101, Travel

You may have noticed at the very beginning of March I quietly escaped from blogging to spend some much needed time relaxing. I along with two gal pals headed off on a four day cruise on the Carnival Paradise.

I agreed to go not only because I needed the time away but because the pricing was super affordable. I paid $350.00 for four days of travel with unlimited room service , food and on board activities. Not to mention you don’t have to pay at one time the Carnival.com site allowed me to make payments at my convenience. To me you can’t get anymore financially responsible then that.

Carnival also offers pretty good military discounts . They do differ depending on the ship you are on from what I have learned so just be sure to ask a representative when you book.

My journey began Thursday February 29th as I flew to Tampa Florida to meet the other girls since everyone was on different schedules. I flew on Southwest (I will speak about that mess another time) and thanks to delays made it later then I expected and settled into my King Sized room and bed at the Laquinta Inn Tampa. 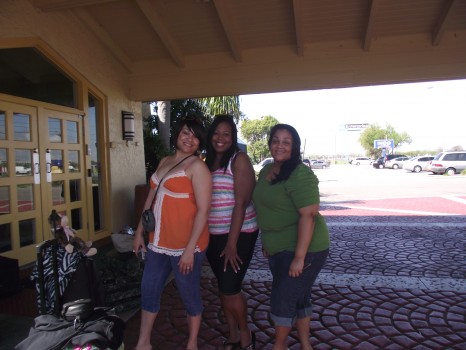 Who says officer and enlisted wives can’t hang out!

The next morning we waited for our shuttle to take us over to the port in Tampa where we would embark on the “Carnival Paradise”.

We finally arrived at the port checked in our bags right at the curb and entered a building (after showing our cruise ticket) then went upstairs to go through customs/checkin. Luckily for me I had a chance to try out “VIP Checkin” which allowed us to bypass this line: 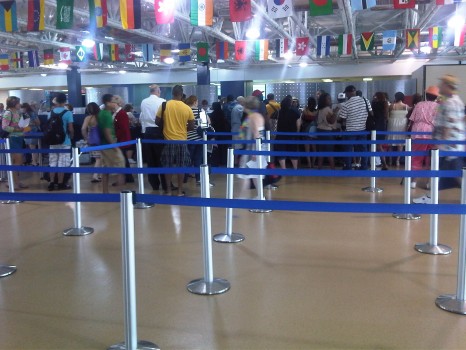 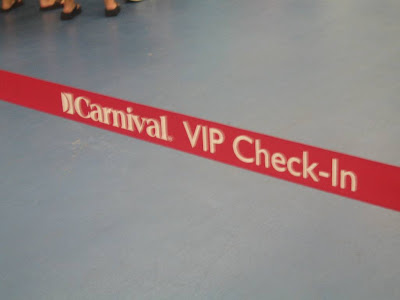 After we completed our check in we couldn’t go to our rooms until 1:30pm so we made our way to the top deck to enjoy drinks food and sun! 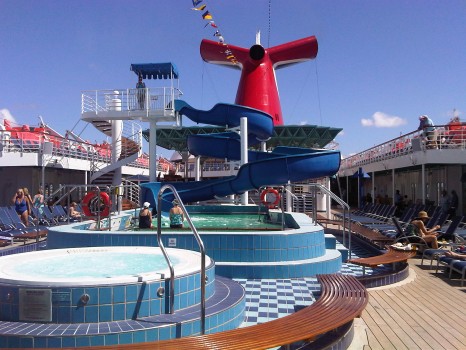 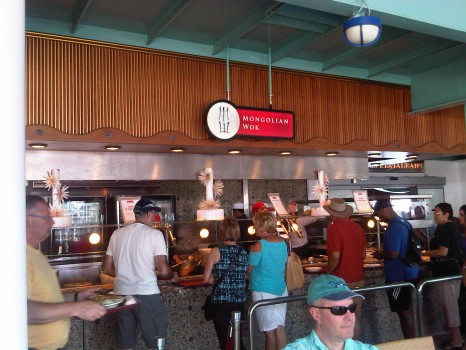 We were able to grab some much needed food from one of their many food areas!

We didn’t eat at that point but we did have some of their delicious cold lemonade, which is a big change from past cruises where the only free beverages offered were water and tea.

Check out this video of me lounging on the top deck of the Carnival Paradise before getting to my room:

Our rooms were finally ready and we made our way to them but not first without passing through the beautiful atrium of this older but well taken care of ship. 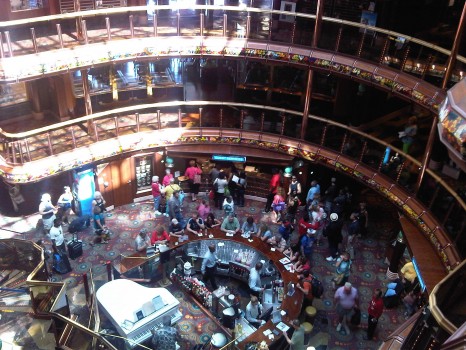 My room was on the 5th floor and although I felt it was alittle dated compared to the last Carnival ship I was on this room was much bigger then the room I remembered. I believe it had something to do with how the beds were arranged but I was happy that me and my friend didn’t feel like we were suffocating each other. Our assigned Stewardess Saman was great and I will tell you later how he really won me over. 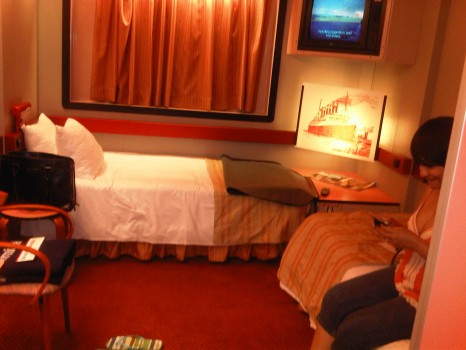 I have to say I was pretty satisfied with our rooms. Although they are a little dated for my taste they were spacious and the cleanliness of them was great.

Here is a video tour of our room:

I don’t want to overload you but in Part two I will talk about food , computer access, dinner with the captain , activities on the ship and our time in Mexico oh and seasickness.

Disclaimer: My carnival Cruise was not paid for by Carnival . I was afforded the opportunity to try some cool features of Carnival though. I was not asked to write this post and all opinions are true and mine.

Krystel is the mom of two and an Army Wife. In addition to Army Wife 101 she is the Co-Founder of SoFluential.com a digital media agency that connects brands with the military market. She has appeared on MSNBC ,FOX LA and formerly was a weekly contributor to HLN's "Raising America". She has written for various outlets including Sheknows and Lifetime and is a big fan of cupcakes and french fries.
March 29, 2012 by Army Wife 101 | 9 Comments

9 Comments on Life With Krystel: My Cruise to Comzumel Mexico on The Carnival Paradise…Part One