Disclosure: I received a media rate to visit Great Wolf Lodge. All opinions are my own.

We hadn’t been anywhere since the great car wreck of of 2011 , so on our way home from visiting family I took up Great Wolf Lodge on an invite to visit their resort in Williamsburg, Virginia. The minute we pulled up to this beautiful lodge we were in love. It reminded us of a certain Wilderness Lodge elsewhere. 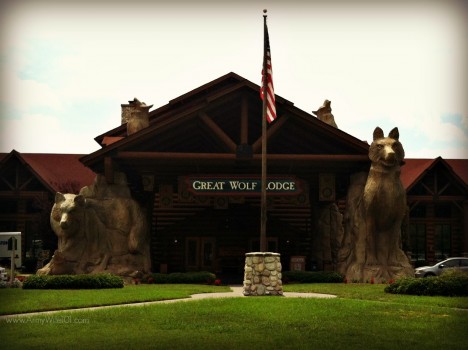 As my family and I entered the lodge we were greeted by fun music, rustic yet colorful decor, and a lodge that replicated a huge beautiful log cabin. Check-in was a breeze, although interrupted by a quick fire drill, but hey, at least we knew the alarms worked. As mentioned check-in happened quickly, and we were given cool wristbands which also served as our room keys. I really love the wristband room key feature since I tend to misplace normal room keys all the time. The wristbands were waterproof and were able to get wet without deactivating. 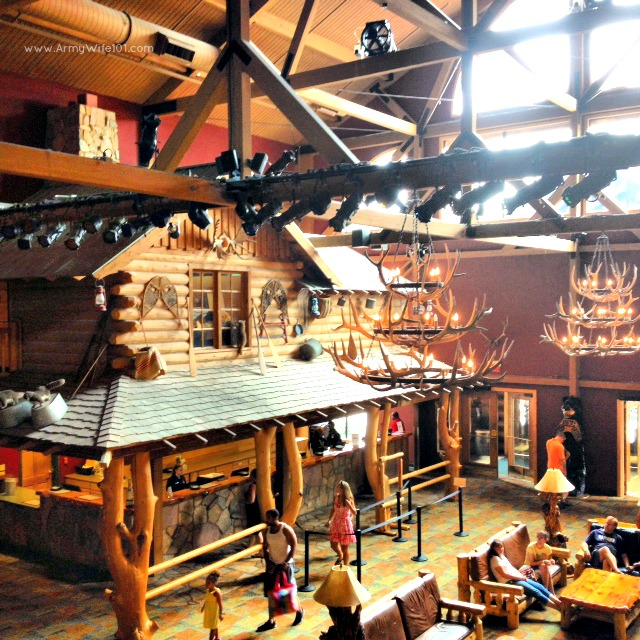 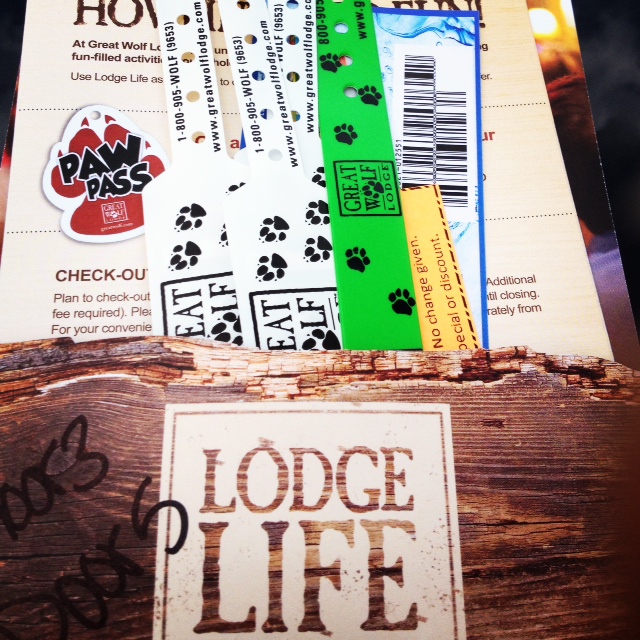 We made our way to building 5 to the third floor and took the elevator to our room which was #3099. I entered with my key as if I was some type of secret government agent who could open a door with some special wrist gadget. In this case it was my hotel wristband. We were placed in an Upgraded Fire Place suite. The room was really nice, homey and filled with a modern rustic decor. I couldn’t help but notice how super clean the room was. Housekeeping does a great job. Our beds were plush, clean, and oh so comfortable and the sofa provided a place to lounge and watch television if you didn’t want to lay in bed. Speaking of TV’s the room came with two. This was great and provided a simple resolution to kids fighting over who watches what.

I found the presence of a fridge, microwave and separate sink a huge convenience, seeing as many hotels aren’t including that in rooms anymore. There were plenty of extra pillows and blankets in addition to recycling bins. 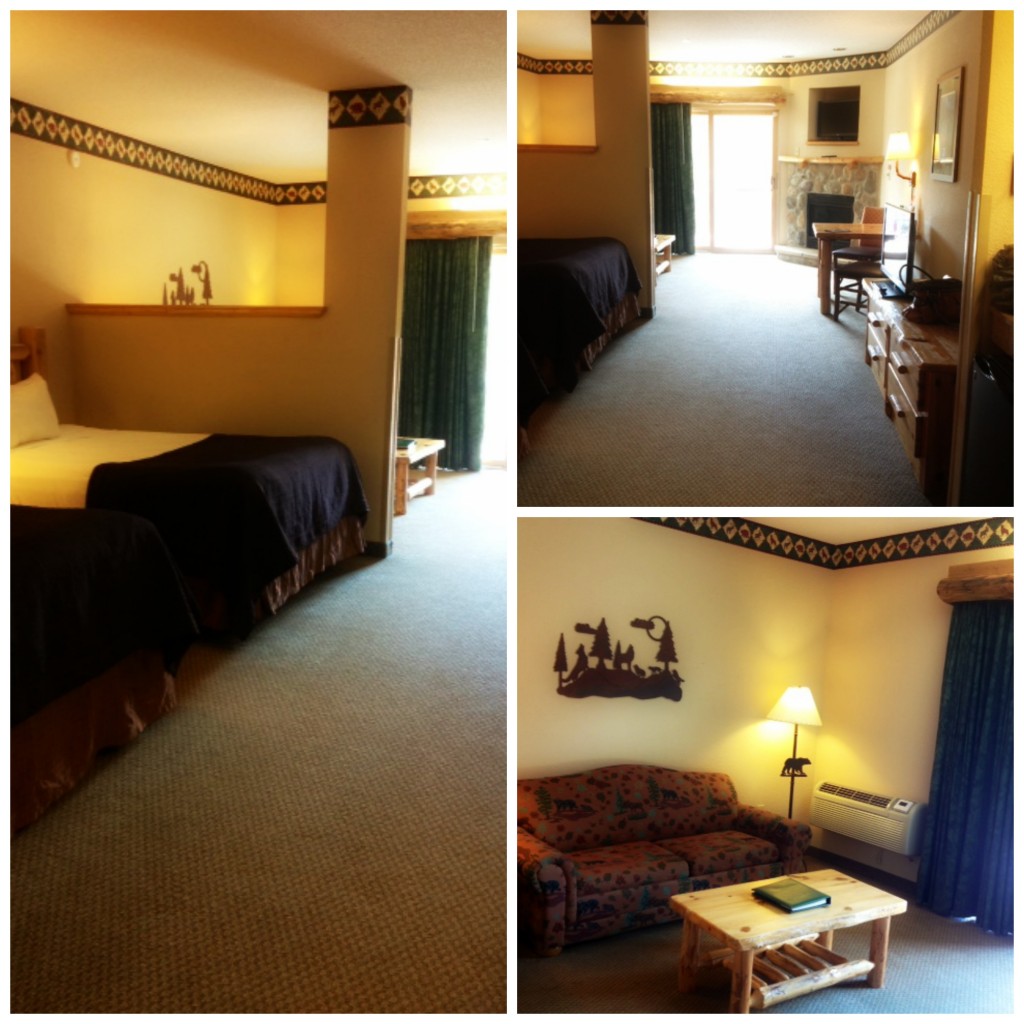 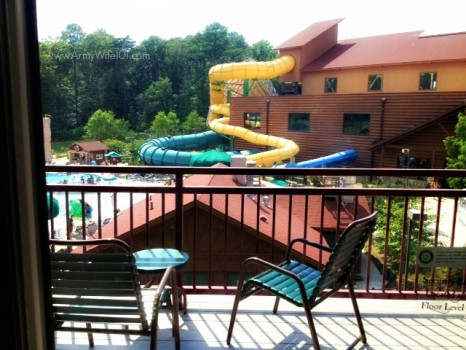 In addition to our lovely room we had a wonderful view of the outdoor pool. The room provided us with sliding glass doors which makes for a nice getaway at night with the hubby once the kids are sleep.

Our bathroom was a great size, super clean,  and filled with an assortment of lots of fun bath products for our use. There were plenty of towels and wash cloths and we never had to call down for any extras. 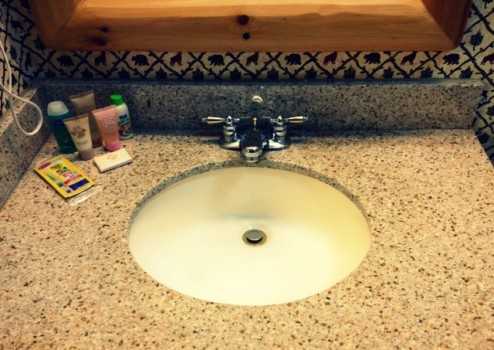 Of course the most exciting part of the trip was the water park and my family was really hyped up about going. The great thing about the Great Wolf Lodge is that while check in is at 4pm you can begin using the indoor water park as early as 1pm. Even on the day of checkout which is 11AM, you can stay in the water park until closing.

We entered the water park, which is extremely impressive considering it’s indoors. Great Wolf Lodge’s water park really delivered. There were so many attractions that I couldn’t believe would be so fun since they were indoors. The park consists of multiple slides, family raft rides, a huge wave pool, a lazy river and even some attractions not for the faint of heart like the Tornado. My kids really enjoyed the huge bucket that dumps a 1,000 gallons of water on anyone standing in the vicinity every so few minutes. When the bell starts ringing everyone knows to run over there. One of the best parts of this whole trip for me was that I felt very secure thanks to the lifeguards who are on point. I have never seen such precise formation and how they scan up and down the pools looking to make sure no one is in distress. I appreciated the fact they weren’t standing there in one spot and not aware of what was happening in other areas. My daughter even seen a manager place a fake dummy in the water to see how long it would take for one of them to notice and right away they did. It made for a much more relaxing atmosphere , considering I am not the biggest water fan. You also won’t have to worry about lugging towels to the park as they are provided there at no fee. 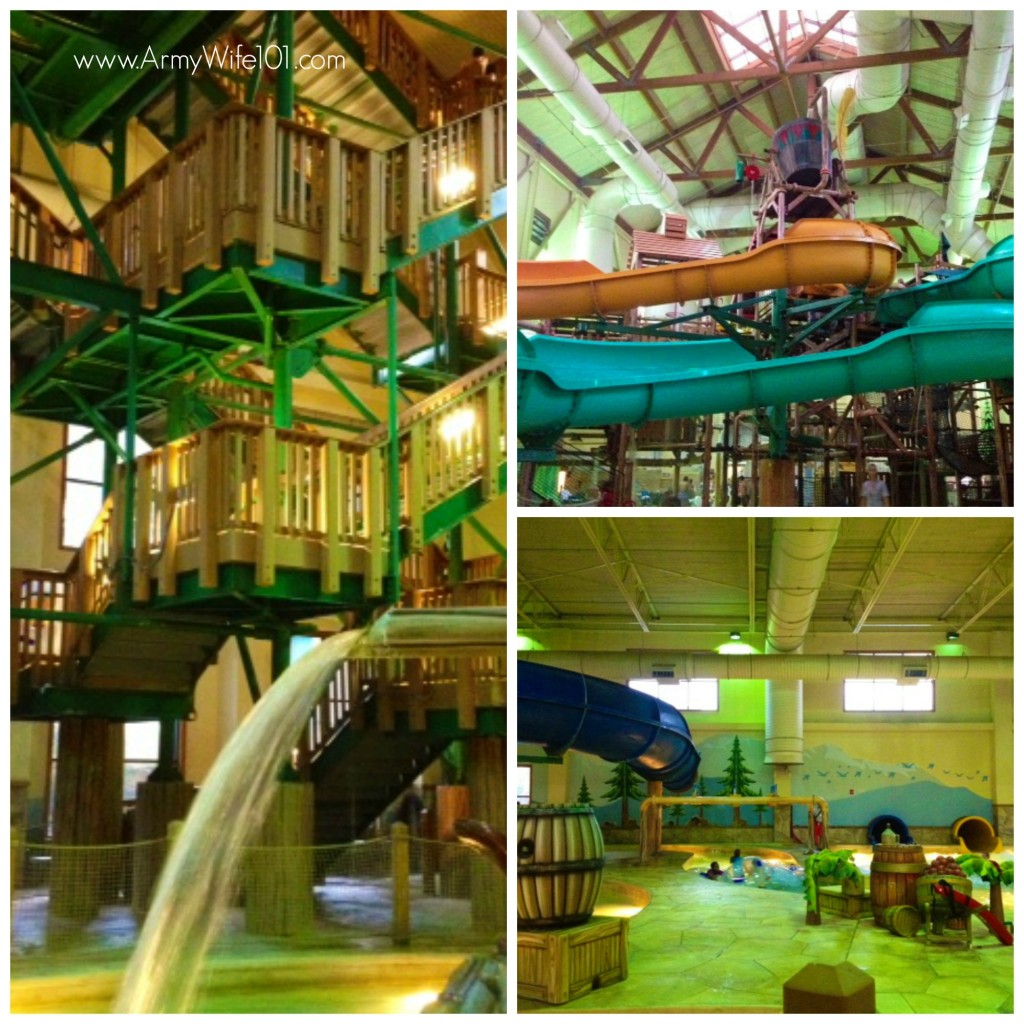 After the day at the water park we were hungry and headed to the Hungry Wolf for a large pizza that was really good, had large slices and tasted homemade. There are other eatery options such as a Pizza Hut Express, Loose Moose Bar and Grill and a sweet treats place.

Speaking Of sweet treats, check out these goodies that were sent to my room . 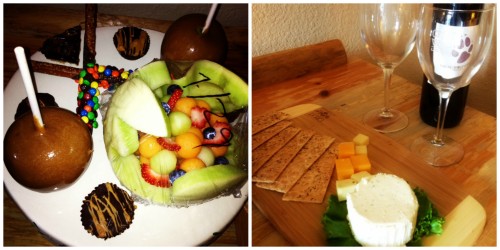 All in all we had a great time and we are already working on plans to go to GWL again next Summer. I love that you don’t have to leave the property for anything. There were several other attractions on the grounds such as bowling, a 4D game theater , a large arcade, a kids spa , and story time twice a day at the front of the hotel with the Great Wolf Lodge characters. Free Wifi in rooms was great and there is plenty of relaxing areas to sit and people watch even for those who are not water fans. 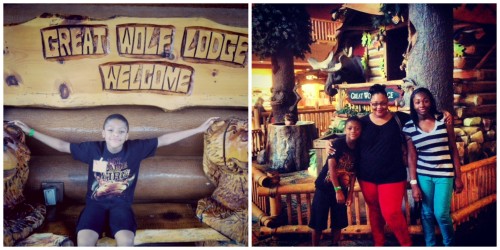 For us military folks you can take great joy in knowing that Great Wolf Lodge supports our military and has a discount just for us and other uniformed employees. It’s 20% off the best available rates and you will have tons of cabin options to choose from with it.

Click Here to Learn about The Howling Heroes discount.

There are 10 Great Wolf locations nationwide.

Krystel is the mom of two and an Army Wife. In addition to Army Wife 101 she is the Co-Founder of SoFluential.com a digital media agency that connects brands with the military market. She has appeared on MSNBC ,FOX LA and formerly was a weekly contributor to HLN's "Raising America". She has written for various outlets including Sheknows and Lifetime and is a big fan of cupcakes and french fries.
August 7, 2013 by Army Wife 101 | 2 Comments

2 Comments on My Stay At The Great Wolf Lodge In Williamsburg, Virginia…Plus GWL Military Discount Alert