Disclosure: I received a complimentary stay at the Hotel Helix to share my experience. All opinions are my own and have not been influenced.

A few weeks ago the family and I embarked on a day trip to Washington, D.C. We took in as many sights as we could including the Smithsonian. The Smithsonian is huge and comprised of so many different museums and buildings, so we were beat when the day was over and could not wait to get to our hotel that the Kimpton  “The Hotel Helix” had provided us complimentary accommodations at.

The Helix Hotel is located in a residential neighborhood in Logan’s Circle which is an eclectic off the beaten path area in Washington , DC. We enjoyed that the area was walker friendly and had tons of eateries and coffee shops nearby. 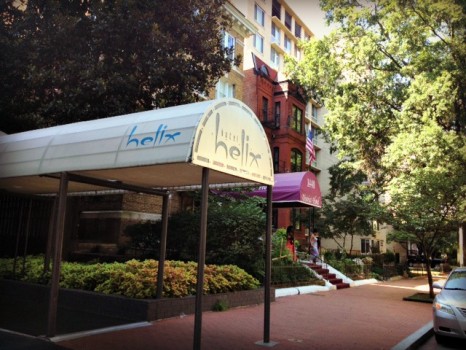 The Hotel Helix is definitely different then your typical chain hotel. As you enter the hotel a purple curtain automatically opens as if you are a star entering a stage. The check in area is not a typical desk but rather two separate kiosk in a far left corner. You are greeted by pop century photos and Andy Warhol like art . Pink and blue club lights illuminate the foyer along with multicolored pieces of furniture. I soon learn that this is the decor of the entire hotel and it’s definitely eclectic. Check in with Terrence ( I believe that was his name) was a breeze and he took great care of me and my family. 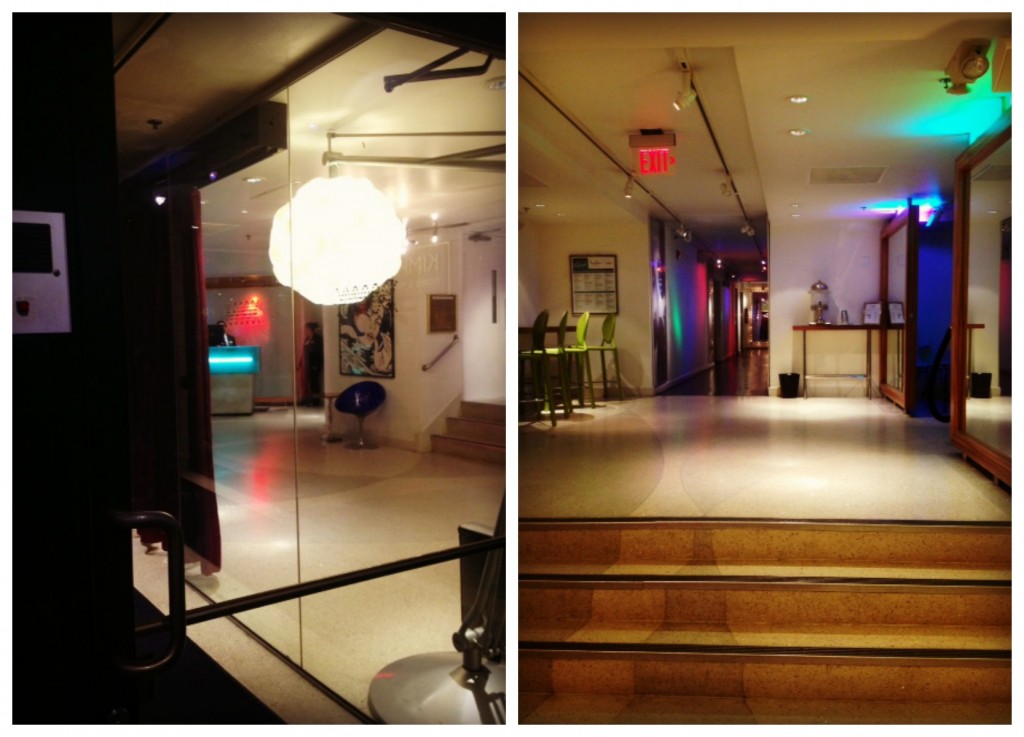 I have to admit I wasn’t quite sure the hotel was going to be so kid friendly at first but I was happily mistaken. When we arrived at our room , we were surprised at how large it was. The kids were excited as they were greeted by fun bunk beds, their own TV , and if that wasn’t enough boards games and a fish tank! How many hotels have you been to that have a pet goldfish in the room? In addition for those with smaller children Kimpton Kids ( the chain which Hotel Helix is owned by) helps to make life easier by offering in room child safety kits to make the room more kid safe. Things included in the are outlets covers and toilets latches. Additionally cribs, high chairs and car seats can be provided by the hotel concierge. 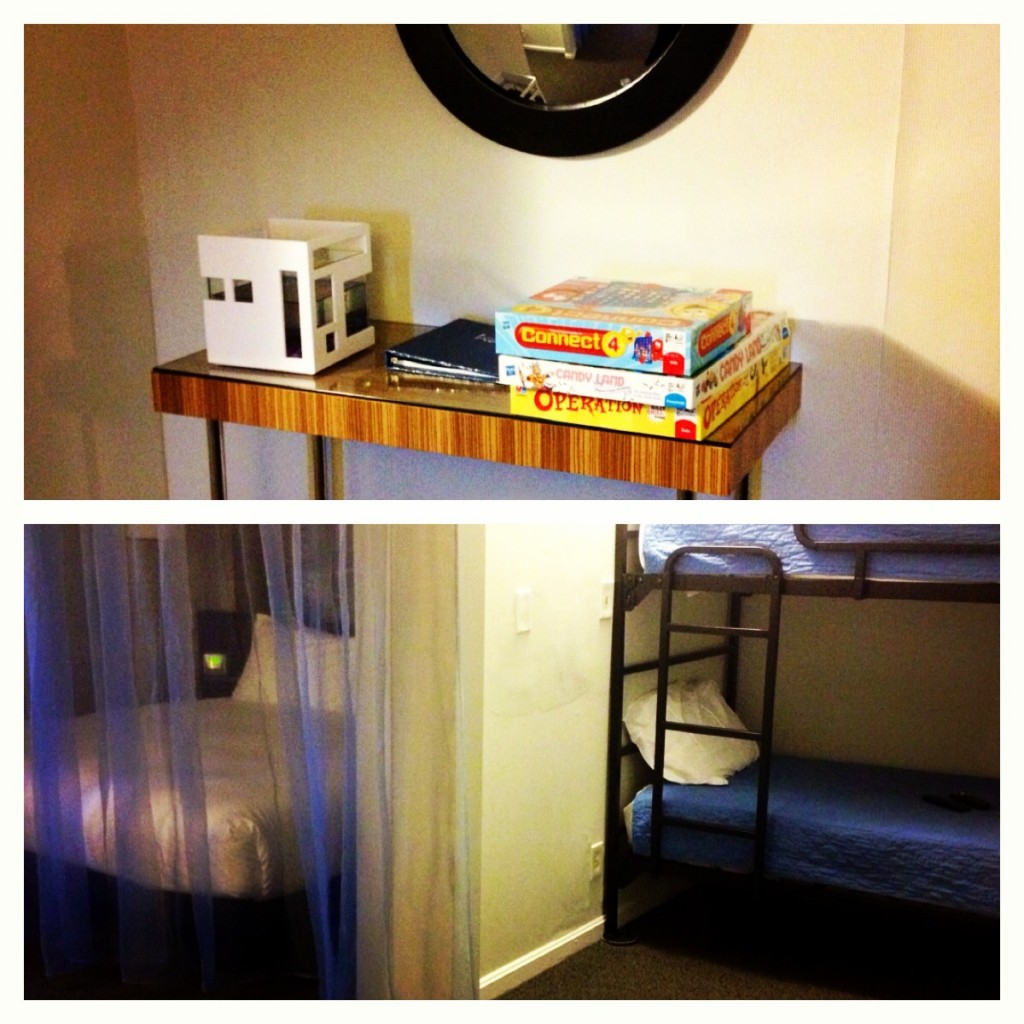 After we got past the kid stuff it was time to see what kind of conveniences there were for us mommies and daddies. I was already in love with the size of the room and the fact that the kids area was separate from my sleeping area. Us parents are also afforded the luxury of our own TV and cordless phones on each side of the bed. The bed was the centerpiece of the room. It was placed behind periwinkle blue sheer panels and was queen size with down comforters and super comfy pillows. The huge picture of a surfer covered the entire wall over the bed. As I said the decor was definitely different but that’s what made the room fun. 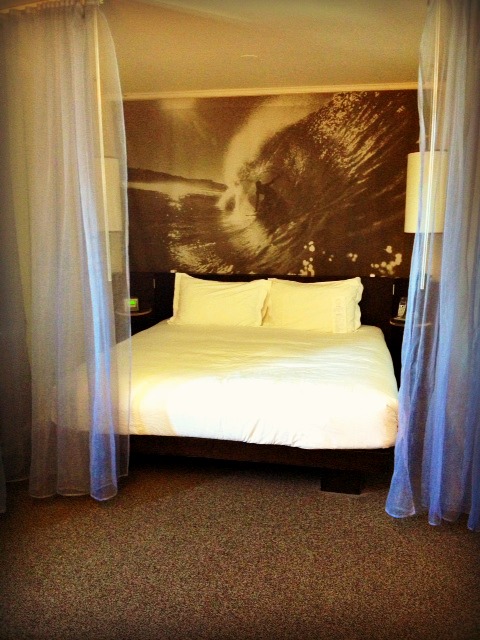 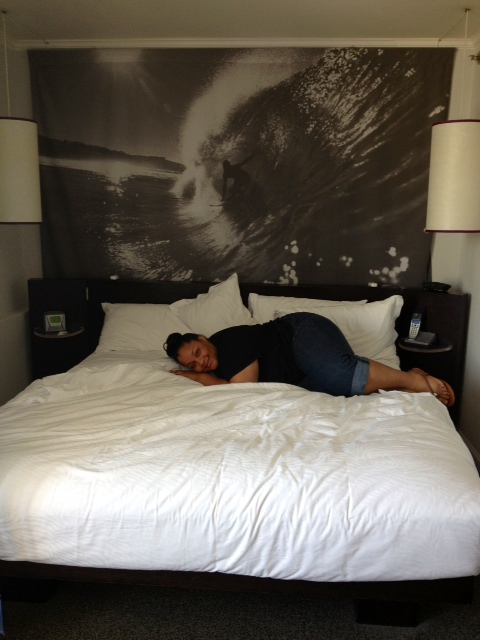 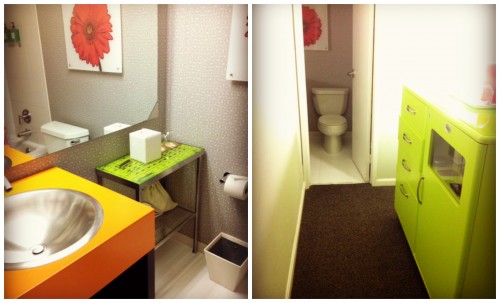 As I mentioned the room itself was large, offered a nice view and a pretty nice in room bar. Speaking of the in room bar those who are rewards members get a $10 in room bar credit. The bathroom was decent size and I liked the built in shower gel and shampoo dispensers in the shower. The bathroom was colorful and the decor made it fun to use. Another great thing was the FREE Wifi. It was easy to log onto as well. I have been to way to many hotels where the internet not only has to be paid for but it is hard to gain access. 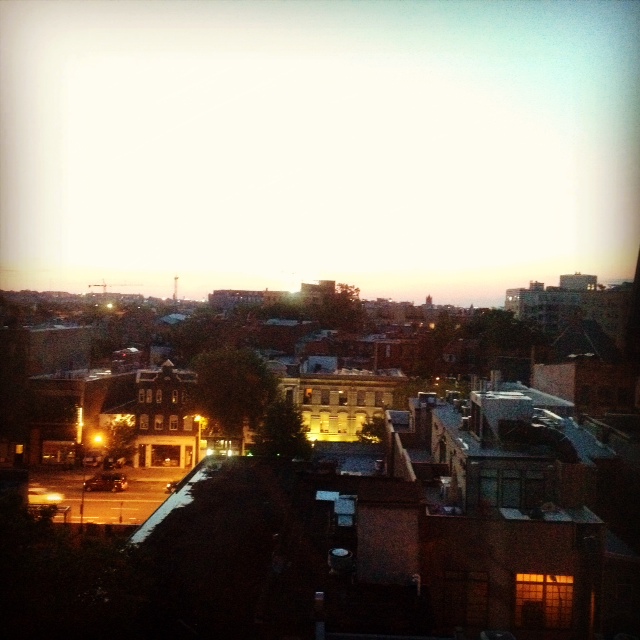 Other features of the hotel I enjoyed were the Complimentary (Free) Wine Hour. After the kids are settled it’s a nice way to unwind. The patio and the bar area are really cool and decked out with funky colored lights, white leather couches and just an all around cool vibe.  The hotel offered a kids menu and serves full breakfast and dinners. You can choose to dine in your room or eat in the lounge . The bars offers over 18 different craft beers and I enjoyed my Amaretto Sour which did not taste watered down at all. For those with pets you will appreciate the fact that the hotel is very pet friendly. 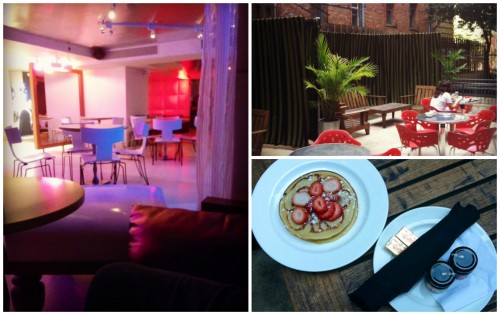 All in all we enjoyed our stay and I would recommend this hotel for any military family. There is something to accommodate everyone and every family. I think if you are going to explore the Washington , DC area then this may be the perfect hotel for you. After being in downtown DC all day in the hustle and bustle of traffic and people, it felt great to come back to a more residential area. There was peace and quiet which was much needed after walking all day.

Look forward to another visit!

Krystel is the mom of two and an Army Wife. In addition to Army Wife 101 she is the Co-Founder of SoFluential.com a digital media agency that connects brands with the military market. She has appeared on MSNBC ,FOX LA and formerly was a weekly contributor to HLN's "Raising America". She has written for various outlets including Sheknows and Lifetime and is a big fan of cupcakes and french fries.
September 2, 2013 by Army Wife 101 | 4 Comments

4 Comments on Military Travel Diaries: My Stay At The Kimpton Hotel Helix in Washington, DC