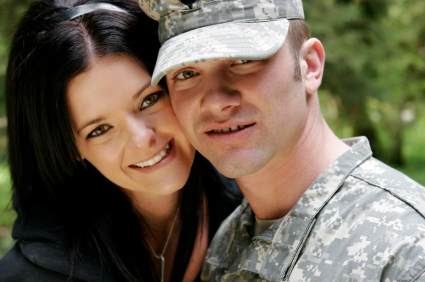 Comcast just emailed me the press release for this series hosted by Lisa Ling. I thought I would share for those inquiring minds:

Its easier to recognize the person in uniform and not necessarily what stands behind them. And that is the family unit. The paintbrush stroke is a lot broader than just the man or woman [who] served.  Dedie Davis, Military Wife

(December 6, 2010, Los Angeles, CA)  There is an integral facet of military life not often talked about on the nightly news: the difficult lives of those who are left behind. While their husbands are on the front lines, these women fight to keep their families together and strong. And, when their loved ones finally do return home, many wives find themselves facing an entirely different type of battle. While all of the women profiled express great pride in being a military wife, they also open up about the struggles they face while their spouse is away and when he returns home. E! Investigates: Military Wives, hosted by Laura Ling, is an intimate look at the spouses who support our soldiers and premieres on December 15th at 10:00 PM on E!

PTSD is just an acronym to many Americans, but to a military wife these letters can mean a life forever altered. Its estimated that one in five soldiers is afflicted with Post Traumatic Stress Disorder, a crippling ailment with no visible wounds. Ive always described it as the man who I married died in Iraq and I didnt know the man who came back in his place, Katie Bagosy explains to Ling. Bagosy is the wife of Tom Bagosy, who took his own life after returning home from a tour of duty in Afghanistan. His widow opens up to E! and shares the disturbing story of her husbands final days.

Ling also learns how a soldier affected with PTSD can quickly turn violent. Shayla and Tom Delgado sit down with Laura and describe the day that Tom sent Shayla to the hospital after a violent fight. The last thing I remember was getting into an argument with my wife and then the next thing I know, I blacked out  and I came to in jail, recalls Tom.

Maria Sutherland and her husband, Steven, desperately wanted to have a child but werent able to before he was deployed to Iraq. In a bittersweet twist of fate, Stephen was killed in combat but, because the couple had Stephens sperm frozen before he left, today Maria is the proud mother of a 3 year-old son.

Even when a soldier stays healthy, the life of a military wife is never easy. Having to raise children alone, infrequent communication from the battlefield and constant worry for a soldiers safety is no small burden to bear. Says Shayla Delgado, theres just a certain bond, a certain understanding that military wives [have] for one and other. I just have such a special place in my heart for all of the wives out there  they go through a lot.

E! Investigates: Military Wives premieres on December 15th at 10:00 PM only on E!

Krystel is the mom of two and an Army Wife. In addition to Army Wife 101 she is the Co-Founder of SoFluential.com a digital media agency that connects brands with the military market. She has appeared on MSNBC ,FOX LA and formerly was a weekly contributor to HLN's "Raising America". She has written for various outlets including Sheknows and Lifetime and is a big fan of cupcakes and french fries.
December 6, 2010 by Army Wife 101 | 6 Comments