Compensation for this post was provided by Chevrolet via MSB New Media.  All opinions expressed in this piece are my own. 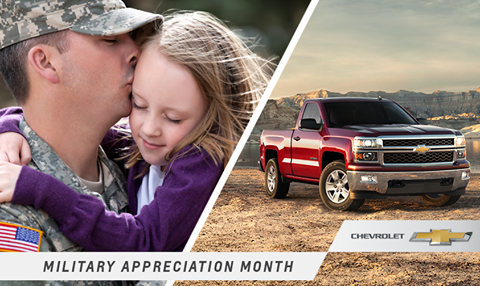 I come from a generation of military personnel. My grandfather was a Master Sergeant in the Air Force, all three of my mom’s brothers were in the military and retired and one of my mom’s sister served in the Air Force as well along with various cousins. I supported their service in the military but didn’t fully understand the significance of the military until I married my husband. My husband has served honorably as Active Duty in the Marine Corps, the US Army, and now the Army National Guard for the past 14 years.

It wasn’t until I got married and saw first hand the sacrifices that my husband made did I fully get why it was so important to show appreciation for our military personnel. It takes a very strong person to leave their families behind for a year and go thousands of miles away never knowing what is in store for them mentally or physically. Watching him do this for years with no complaints has made me have a love for the military that is unexplainable.

As a military blogger it’s very important for me to not only share my love and support of our Armed Forces, but also those of any company who makes it their mission to show their gratitude and support for our troops. And because it is Military Appreciation Month I am excited to share about #ChevySalutes which is Chevrolet’s way of saying Thank You and giving back to America’s heroes.

During Military Appreciation Month, now all Veterans along with Active Duty, Reserves and Retirees are eligible for the Chevrolet Military Discount. The best Military Purchase Program in the industry. The discount can be combined with most current incentives. You’ll also get the security of Chevrolet Complete Care available on 2014 purchased and leased vehicles. Backed by 24 months or 24,000 miles of included scheduled maintenance†, warranties that cover powertrain, bumper-to-bumper and anti-corrosion, and five years or 100,000 miles of roadside assistance with courtesy transportation†. USAA members receive an additional $750 private offer†. The Chevrolet Military Purchase Program is available to more military personnel than any other brand. It’s just one of the many ways that Chevrolet is proud to serve all that have served. Build and price to see  how much you can save. 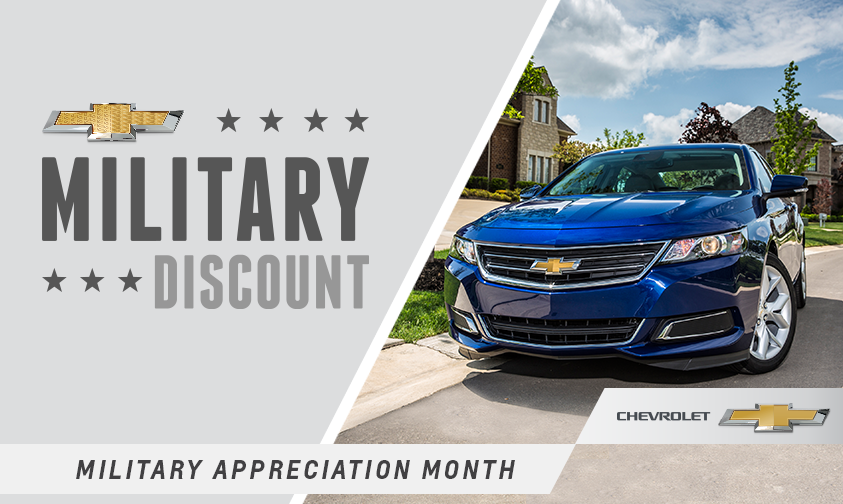 The awesome part about this discount is you can go to ChevySalutes.com and sign up to get it. They’ve made the process super simple.

And although Military Appreciation Month is just one month out of the year, Chevy makes it their mission to continue their appreciation and thanks all year long. Not only do they have over 60,000 employees who are Veterans , they support the Achilles Team of Wounded Warriors and Cellphones for Soldiers. Chevrolet is also the official vehicle of the Army Navy games. I love that it’s more then just a discount to them. Chevy is going the extra mile to display they really care about our brave men and women.

The military runs deeps for so many people . Even if you’re not directly related to it you may know an extended family member or close friend who has served.  Want to say thank you and possibly win a great prize at the same time? You can do so in the #ChevySalutes Instagram contest. Follow the instructions on the image below to enter. 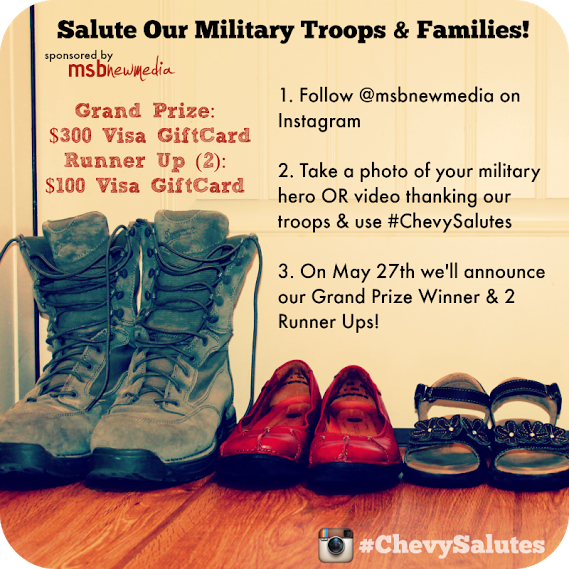 Many thanks to Chevrolet for what they are doing for our troops. To see more of their military related initiatives click here.

Krystel is the mom of two and an Army Wife. In addition to Army Wife 101 she is the Co-Founder of SoFluential.com a digital media agency that connects brands with the military market. She has appeared on MSNBC ,FOX LA and formerly was a weekly contributor to HLN's "Raising America". She has written for various outlets including Sheknows and Lifetime and is a big fan of cupcakes and french fries.
May 21, 2014 by Army Wife 101 | 0 comments