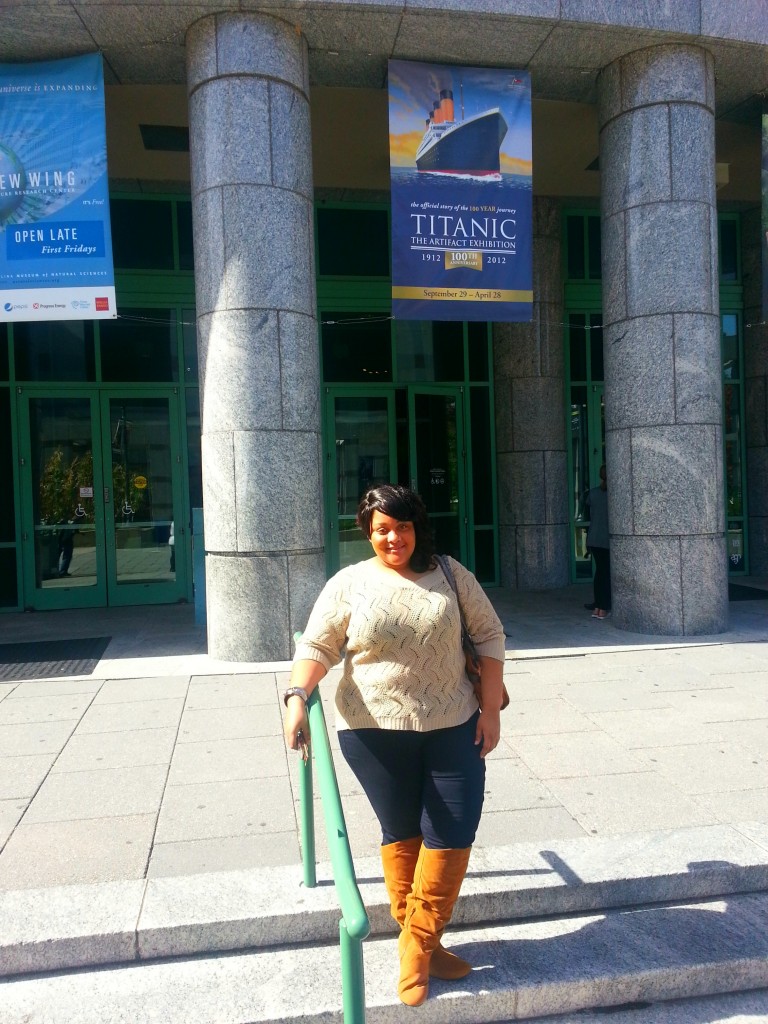 My family and I had been to the Museum of Natural Sciences before and enjoyed all the exhibits. I’ve also mentioned that I am a die hard Titanic fan and have been for years. Imagine my excitement when I found out that the “Titanic: The Artifact Exhibition” was here marking the 100 anniversary of the sinking of the ship in Raleigh, North Carolina at that same museum and that I was given the opportunity to take my family and visit it.

I was anticipating my visit to this exhibit because it actually had artifacts that had been retrieved from the depths of the ocean that at one time belonged to people who were sailing on the ship of dreams known as the “Titanic”.

We arrived at around 11:30am and headed straight to the 2nd floor where we begin to see the signs leading us to this wonderful site.

As we approached the entrance we were greeted by a photographer and a green screen that allowed us to take a pictures with various famous background scenes behind us from the movie such as the one below: 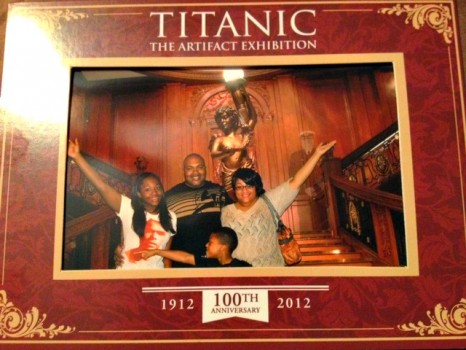 The pics were only a little over $7 with out the frame and $10+ change with the frame.

For some odd reason my husband’s face looks really weird and huge in the picture but my daughter and I looked great in it so I had to have it hehe!

We then made the walk to the entrance where the exhibit begin and were greeted by a pleasant lady who gave us the ground rules for entering and a younger man in 1900’s clothing who somewhat resembled Ryan Gosling in “The Notebook”. I can tell you ahead of time there are no cons to this exhibit except for the fact that you cannot take pictures. I am not sure why but I thought I read sometime ago that it had to do with the preservation of the items as some are extremely fragile .This is the main thing we were forewarned not to do as well as avoiding usage of our cell phones and no eating or drinking.

We were then each handed one of the below “White Star Boarding Passes” and at the end of the self paced tour we would learn if we had survived the sinking of the Titanic by matching the name on our boarding pass to the name on the boards. 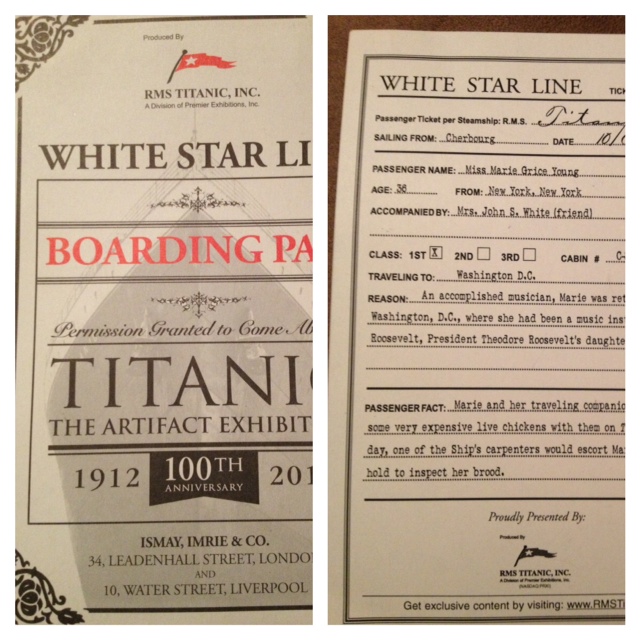 The self guided walk through begins with the sounds and a brief summary of the tragedy and the rumble of what appears to be engines combined with an eerie melody sets the tone.

You then walk into the first room with cheery music playing similar to that played in the beginning of the movie “Titanic” when every one is happy and boarding the ship.

I don’t want to to give to much away because seeing it for yourself is a must and you have to be there to experience it.

I will say that the exhibition displays over 200+ artifacts and it was amazing to see a shoe someone had wore, smell real perfume vials and even touch an actual piece of the Titanic. There is also another really fun part but I will let that be a surprise!

I enjoyed the exhibit monitors who wore clothing from that time period which really helped bring the exhibit to life. Seeing the cramped quarters that 3rd class patrons shared and learning facts like over 750 people in third class shared two bathtubs because once a week baths were common made me grateful for my own bathtub. I also learned that if it cost the amount back then now to take a cruise , almost none of us would ever get to go on one.

Reading the stories of people on that ship who are behind some of the biggest businesses in the country today was beyond interesting. Seeing actual clothing items worn by a ship guest , toiletries, and dining ware used on the ship actually made me a tad bit emotional.

I think so many of us equate the ship with the love story brought to us courtesy of the movie and while we all know the fate of the ship seeing first hand items truly made me feel connected to what actually happened before that fateful night and the people there.

After we were done we all raced to the boards to search for our names that were printed on our boarding passes.

Surprisingly all of us survived!

We then visited the souvenir shop and while normally I am anti-souvenir (I am cheap) I almost cried when hubby somehow managed to sneak and get this for me: 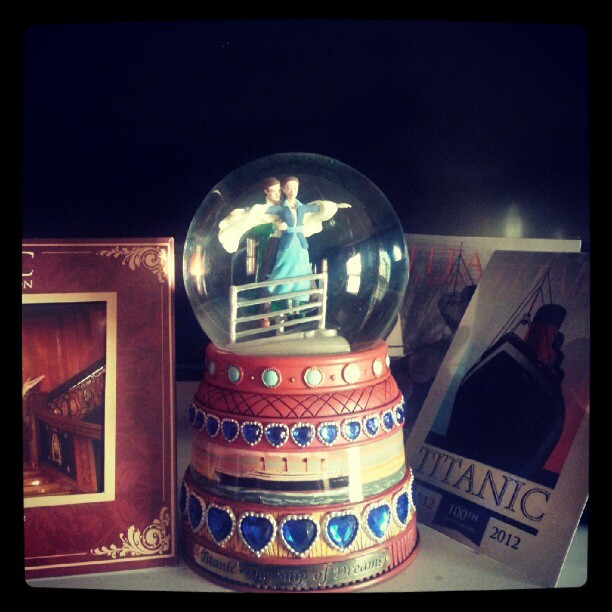 Overall I was so glad to bring my kids there and they too were fascinated by seeing how massively huge this boat was and also seeing how people lived in those times.

For us living here in the Fort Bragg area, there is so much to do at the Museum of Natural Science and I highly recommend bringing everyone from the teens to the little ones because there is something for everyone. In addition while certain exhibits do have an entrance fee, the rest of the museum is free so this makes for a nice little day trip.

The Titanic Exhibition prices are listed below along with the military discount:

Read my last post about the military discount offered at the Titanic Exhibit.

Disclosure: My tickets to visit this exhibit were provided to me at no charge. No other forms of compensation were received and all opinions are my own.

Krystel is the mom of two and an Army Wife. In addition to Army Wife 101 she is the Co-Founder of SoFluential.com a digital media agency that connects brands with the military market. She has appeared on MSNBC ,FOX LA and formerly was a weekly contributor to HLN's "Raising America". She has written for various outlets including Sheknows and Lifetime and is a big fan of cupcakes and french fries.
October 22, 2012 by Army Wife 101 | 6 Comments

6 Comments on North Carolina Family Happenings: My Visit To The Titanic Exhibit At The Raleigh Museum of Natural Sciences (Military Discount)