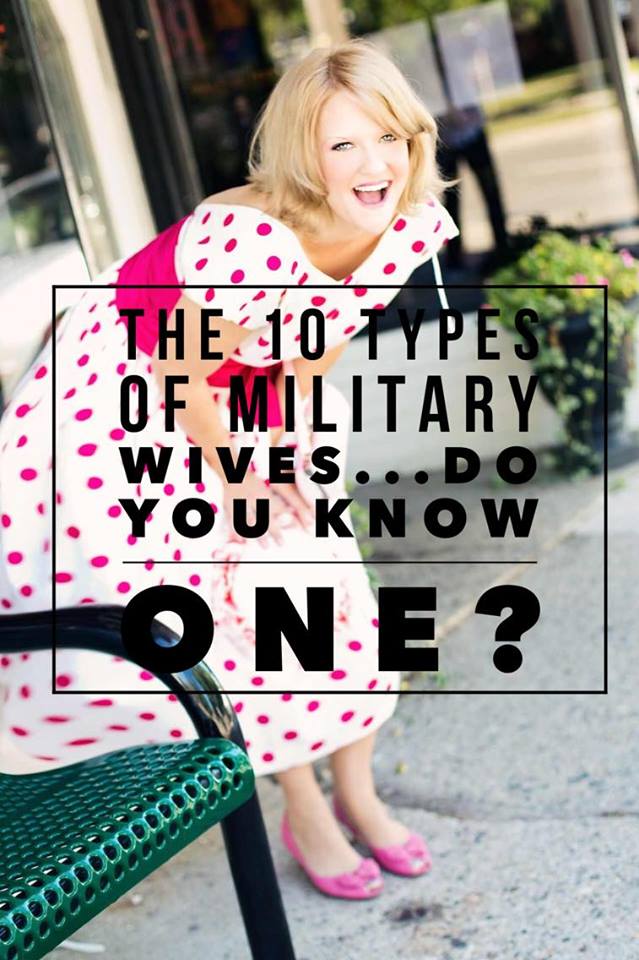 I am one of those people who while not judgemental I get bored and become very analytical for fun. While chatting on the phone with one of besties

( fellow Army wife) Tye from Diary of A Chic Mommy, we begin to discuss the types of military wives that exist.

By listening to others experiences and our own combined we for fun came up with a list of the types of wives that we have seen through out our travels as military spouses.

For the record we are very well aware that these types of wives exist in all facets of life but since this is a military spouse lifestyle blog I geared it towards us LOL!

Oh and this is all in fun people!

The I Am Hooah Hear Me Roar Wife

This is the wife that’s life revolves around any and all things military. She was probably a military brat , swears she knows everything about military life, cooks and bakes for all the military functions even the ones she’s not invited to and wears “I’m an insert branch here” Wife tee shirts. She goes to every single FRG meeting and genuinely has a passion for the military life and is most likely not mean but just a tad bit annoying and competitive.

This is the wife that is obsessed with her husband’s rank and yours too. Matter of fact she is so obsessed with it that you probably won’t have to worry about being friends with her unless your spouse is her husband’s rank or above.  She may or may not be involved in the FRG but if she is it’s usually for the position of authority more then actually wanting to be of help. She is usually a one-upper.

It’s All About My Kids Wife

This is the wife whose most likely a stay at home wife and her everyday life and world revolves around her kids. She attends every school function, volunteers at the base school, and her kids are probably in every activity on post. This person usually has 2+ kids. She usually knows and is the go to person if you want to get involved in an activity on the base and knows all the in’s and outs.

This wife is usually very educated or was probably in the military before and is having a hard time adjusting to the fact that they may have been forced or chose to give up their career. Their primary way of coping with it is to make sure that in almost every conversation they give you their full resume and educational history.

This is the wife that can tell you everything that is happening or has happened in the neighborhood. You almost want to be their friend because who doesn’t want to know if something unsafe is happening where you live, but then you realize they are the type that knows to much. They usually sit outside at various times throughout the day and take it upon themselves to report everything to housing or the MP’s they don’t agree with. Don’t let hubby’s friend come to fix your car during a deployment because most likely you will be having an affair after this neighbor sees you! Avoid telling this type of wife anything going on in your life.

This is the wife that you know exists but you never see because they rarely leave the house. When they do it’s only to go grocery shopping and pick the kids up from school . They will exchange pleasantries but they rarely have friends and don’t choose to be bothered with socializing.

This is the wife that always has something wrong. She is usually a hypochondriac or is going to turn her kids into one. They usually call their husband’s command because their husband is not coming home at 5pm on the dot and they demand to know why they have to work so late. The military never does right by her and makes her life hell. Any and everything that can go wrong for someone usually happens to her and if you come in contact with her prepare the ear plugs because she is going to give you the run down.

The I Got My Own Life Wife

This is the wife that is either works, goes to school or has her own business and really doesn’t have time for small talk about things happening on base. She will accompany her husband to his ball and cares about his career but she draws a line because she has her own thing going on. She is usually a cool chickie but is hard to be friends with because she is busy with her career and hardly has time for socializing.

The Balanced & Can Be Friends With Anyone Wife

This is the wife that is just cool, calm collected and not falling apart and life is what it is to her. She is one of the best types of military wives to be friends with because she has no heirs about her, is non-judgemental and could care less what your husband’s rank is. She will respect you as long as you respect her but has no issues checking a bitch so don’t cross her.

This  is the wife whose spouse has been in 15+ years or more, has seen it all and been there done that. She normally hangs with people only her age or older and like the Balanced Wife will check you pretty easily. She looks forward to her husband’s retirement and settling down in one spot. They are usually part of the FRG but is usually one of he coolest ones on the FRG and tends to come off as a mother figure.

Did I miss a type of wife…do you fit one of these?

Krystel is the mom of two and an Army Wife. In addition to Army Wife 101 she is the Co-Founder of SoFluential.com a digital media agency that connects brands with the military market. She has appeared on MSNBC ,FOX LA and formerly was a weekly contributor to HLN's "Raising America". She has written for various outlets including Sheknows and Lifetime and is a big fan of cupcakes and french fries.
April 24, 2013 by Army Wife 101 | 62 Comments

62 Comments on The 10 Types of Military Wives…See If You Know One!