Home » Featured » The Strength Of My Hero…My Husband
Featured 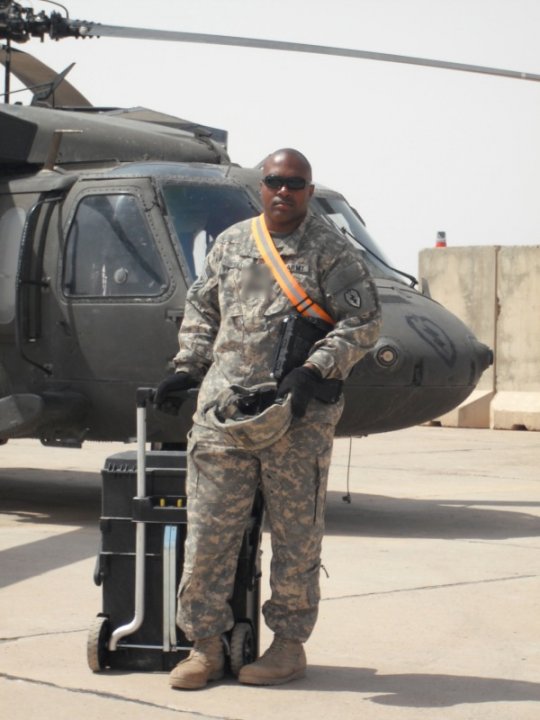 Today is the official Veteran’s Day Holiday and as I laid in bed this morning I looked back over the years of my husband’s military career. I have always known that my husband was strong and in my eyes could handle anything.

I as a wife always looked at hubby’s resilience, his demeanor , his ability to keep cool under any conditions and  wished I could be like that. Sometimes his strength was misunderstood by me because I thought maybe he wasn’t sad to be leaving me or the family.

Then I thought about our first real deployment which was going to be fifteen months. He wore sunglasses the entire time. I really thought it was because the sun was beating down so strongly since it was hot in Georgia at the time. I stood in line with him to get his weapons .Then I remember them telling everyone to say their farewells because it was time to go. He kissed me one last time, hugged the kids and without hesitation walked away without ever looking back.

I had a million emotions running through me , I was scared, sad and felt alone. And as much as I didn’t want to say I was mad at him for not looking back , I was. I wanted that last look for confirmation that leaving us hurt you just as much as it hurt me.

We would talk as much as possible while he was deployed and then there were those times where we didn’t talk at all. There were no blackouts during some of the times he didn’t call me, so I often wondered why he didn’t.

Two years later I learned that he was just as sad about leaving us. I learned that he wore those sunglasses, not because the sun was bothering his eyes but because he has tears in his eyes. I learned that he didn’t turn around to look at us because it would be that last look that broke us both down and those times he didn’t call me was because he knew he was going out on a mission and could possibly be gone for days and he would rather know that my mind is clear and just thinks he is working on base on a helicopter verses hanging over Baghdad somewhere in the center of harms way.

He showed his fears and in the midst of them he wanted to protect us along the way.

I learned from my husband that strength comes in so many forms. To make the best of deployments , to adapt to our lifestyle at that point and to work on us when he came home because of some of the things he experienced, was the definition of strength for me. My husband had faced death in the eyes twice, had watched things no human should have to see and at times showed fear which to me for someone like him as the most strongest thing a person can do.

To get help when things got the best of him was without a doubt the strongest thing I watched him do. This big strong former Marine and now soldier lives by the quote” “Courage isn’t having the strength to go on – it is going on when you don’t have strength.”  He has continued to do so and to watch him come through it all leaves me with a quote that I have lived by through my husbands deployments by Marcus Aurelius “You have power over your mind – not outside events. Realize this, and you will find strength.”

If you’re a frequent reader of Army Wife 101 , you will know over the past few months I have been working with Brawny to encourage others to send messages of thanks to our troops. Brawny donated a direction donation of $250,000 to “The Wounded Warrior Project” and for every message of thanks donated $1 (up to $250k). Our goal was $500k and I am so happy to share that they met that goal and then some.

Thanks to all of you out there so many more Wounded Warriors and military personnel will continue to get the help they need and the encouragement to keep moving forward through mental and physical obstacles they may be facing.

Even if you haven’t sent a message of thanks you can still do so at the Brawny Facebook Page.

Disclosure: This is a sponsored post in a series of post I am participating in with Brawny.

Krystel is the mom of two and an Army Wife. In addition to Army Wife 101 she is the Co-Founder of SoFluential.com a digital media agency that connects brands with the military market. She has appeared on MSNBC ,FOX LA and formerly was a weekly contributor to HLN's "Raising America". She has written for various outlets including Sheknows and Lifetime and is a big fan of cupcakes and french fries.
November 12, 2012 by Army Wife 101 | 3 Comments

3 Comments on The Strength Of My Hero…My Husband