Home » PCS'ing » 18 Ways For The Military Spouse To Ease Her Fear Of Flying In A Plane Thanks To A PCS
PCS'ing, Travel

I have a crazy fear. I HATE to fly! Now having a fear of flying isn’t crazy because its something many people are afraid of. Its crazy for me considering that my career puts me in a position where I fly frequently and alone at that. I’ve just in recent years gotten enough balls to get on the plane and calm my nerves long enough to get to my destination. That didn’t come easily. It came by force! And even though I will get on a plane 4 hours is my limit. I usually don’t like straight flights because frankly I don’t think a heavy piece of metal should be in the air past the 4 hour mark. 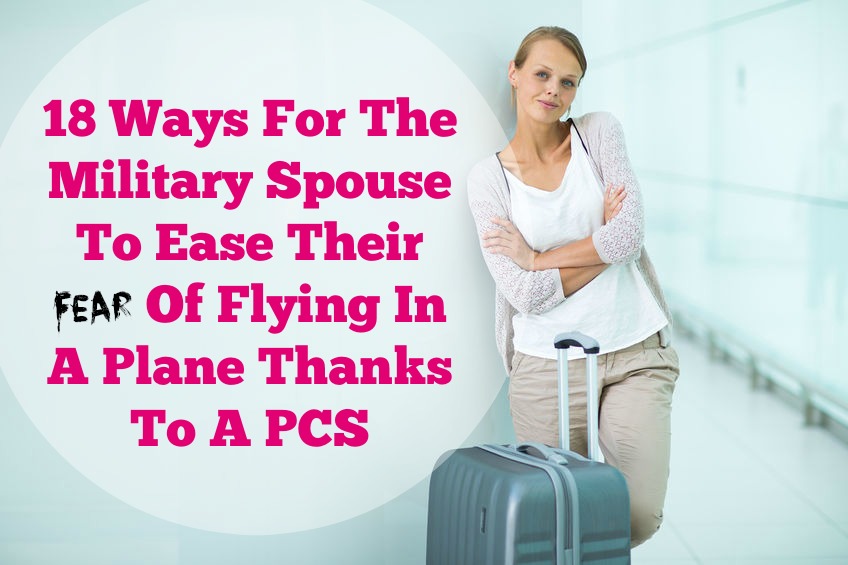 In fact my fear of flying is part of the reason Army Wife 101 was started.  I started this blog to document the flight and our arrival in the land of aloha. My husband received orders to Hawaii and I was terrified of how this flight over the Pacific Ocean was gonna go. My fear was based on a combination of things. This included heights, putting my life in someone else’s hands 30,000 feet in the air , oh and the plane being hijacked.

I literally was researching if there was an option to sail there. My husband’s entire military career (before we got sent OCONUS) I worried about the day he received orders to another country. Would I let my honey become a geo bachelor for a few years all because of a fear of flying? Hell yeah! However I didn’t chicken out and I made the flight with my family. I figured if we went down we’d all be together. That’s how crazy my mind becomes when I think about the idea of flying.

However I recently was talking to a friend who is afraid to fly and whose spouse just received orders overseas. Her situation made me think that there are a lot of military spouses who are sort of being forced to make their first flight due to an overseas PCS. While they should be worrying about organizing household essentials and researching housing-they are in horrifying fear of even getting on a plane to get to their new home. The thing is as a military spouse we are going to have to fly at some point or another and there is usually no way around it.

1.Research- In your free time head on over to Youtube and search key phrases like “first flight , first time on a plane , plane taking off“. This alone will give you a visual of what to expect. It’s the second best thing to actually being on a plane and experiencing the ride.

2.Be prepped- Chances are your fear about flying is a combination of things. Part of that is the complicated process of what can and can’t be board on board the aircraft and the process of getting through security. To simplify the process for you I’ve listed the major must knows.

*.Pack any large bottles of shampoos , perfumes , body washes and anything else over 3oz in your stowed luggage.

*.Do not carry on water because it will be taken away, so be prepared to buy the $3 bottles of water after you get through security. You can bring most snacks especially if you have children.

*. Have your tickets and ID quickly accessible to present to the security agent.

3. Know- that certain things are normal. For instance when the plane takes off you may fell pinned to your seat a bit or that when the pilot is pulling the landing gear up or out you will hear it. Certain smells are normal so yeah you may smell a little gasoline it doesn’t mean anything bad. It’s the nature of flying. You can listen to the sounds of a plane and learn everything about what to expect in a flight at http://www.flyingwithoutfear.com. There is a forum with other people in the same boat as you.

5. Keep an eye on the flight attendants. If they look happy everything is okay.

6. Watch how other people on the flight are acting. Seeing your flight peers calm may help you to relax too.

7. Bring things to distract you on the plane like books, movies , or work.

8. Have a drink. Forget all your “I don’t drink” or “I’m not a drinker”. Flying is a great time to have one but don’t drink too much while flying.

9. If you have motion sickness (which can bring on fear) know that there are barf bags handy and opt for a seat near the bathroom if possible.

10. Know that once you have your reservation number for your flight from the military travel office you can usually go directly to the airline’s site and change your seat if you’d like. If you don’t like being closed in I recommend an aisle seat.

11. Don’t get on the plane with an empty stomach because that combined with bad nerves can be a disaster. However don’t chow down on greasy airport food before getting on either. I always say eat dry foods/snacks like granola bars , bagels or fruit when flying. Be sure to stay hydrated as it will help you from feeling queasy. Avoid too much caffeine before a flight as it can make you even more jittery and antsy.

12. Don’t be afraid to ask friends who have flown about their flight experience. Ask for any tips they can offer.

13. If your plus size like me and have issues with the seatbelt on flights simply ask the attendant for a seat belt extension. I know for some this can cause a fear of wanting to get back on a plane also.

14. You may not believe in God but believe in something or somebody when your 30,000 feet above ground and ask them to guide you to your destination safely.

15. If you feel like you need air open the air valve that is above you fully and enjoy the oxygen coming from it. Let it blow on you.

16. Download a relaxation noise app to your tablet or phone ( you can use your phone as long as you put it in air plane mode), grab a pair of headphones and listen to it. It’s super relaxing.

17. Observe all the people waiting at your gate in the airport. Know that many of them fly all the time. Think to yourself would this many people really fly if it were that bad?

18. Last but not least if your fear of flying is extremely bad then you can go to your doctor and they will usually prescribe you a prescription to help keep you calm.

What tips do you have to conquer a fear of flying?

Krystel is the mom of two and an Army Wife. In addition to Army Wife 101 she is the Co-Founder of SoFluential.com a digital media agency that connects brands with the military market. She has appeared on MSNBC ,FOX LA and formerly was a weekly contributor to HLN's "Raising America". She has written for various outlets including Sheknows and Lifetime and is a big fan of cupcakes and french fries.
April 6, 2015 by Army Wife 101 | 0 comments