Home » Military Life » Deployment » 4 Reasons You’re Nervous About Homecoming
Deployment
The moment your husband leaves, all you can think about is your reunion. Instantly he is sorely missed, you are often lonely while waiting for his call. Somehow you manage to press on and make the most of it, while counting the days in the meantime.
Finally, homecoming approaches and in addition to excitement, you’re surprisingly nervous, stressed and worried. Why is that? Isn’t this the moment you’ve dreamed of for weeks or months on end? 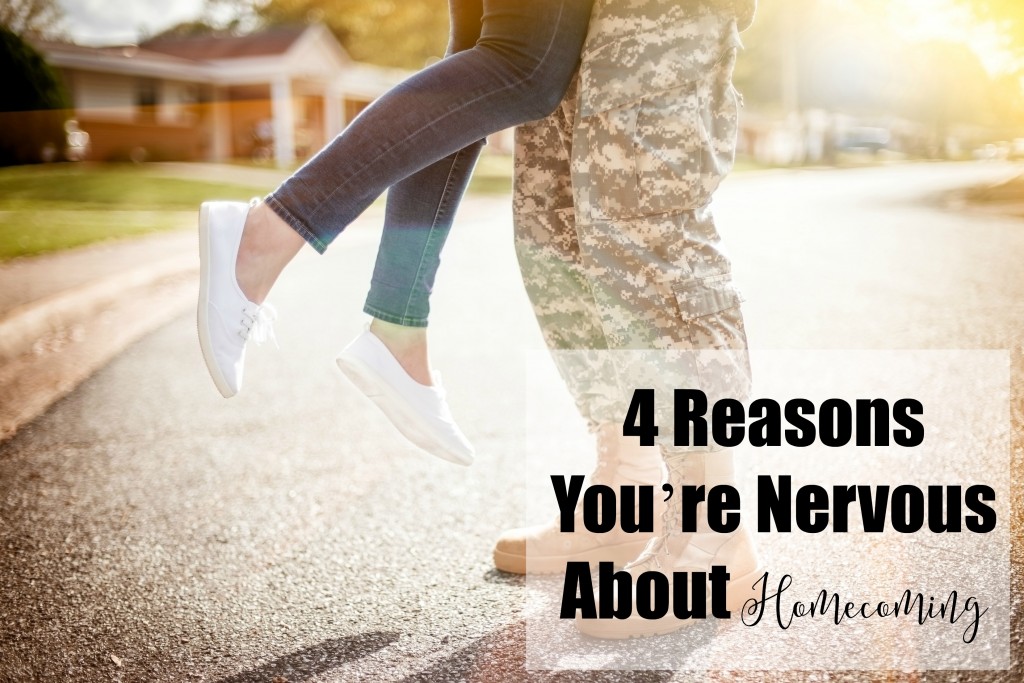 Here are a few of the top reasons why this scenario brings mixed emotions:

As they say, absence makes the heart grow fonder. The everyday stressors like whose turn is it to do the dishes or who left the toilet seat up, will melt away with time and distance. Instead, you focus on happy feelings, sweet memories, and in your mind the relationship is perfect. As romantic as that is, there will be a moment when reality kicks in and the honeymoon is over. It will probably be minor, such as tension over a disagreement, and you’ll probably feel disappointed when that moment comes. Please know that emotions are complex on both sides and that with honest communication, patience, and an adjustment period, you can land in a very happy place.

2) You can do everything yourself.

Military spouses excel at becoming one-woman shows. We manage the jobs of both spouses when charged with running solo, and sometimes find things easier when we are completely in control. (Not to mention, we have less laundry, cooking, shopping and cleaning to do while he is away. And how long since we last shaved our legs?) Now, this isn’t always the case and there are times we’d love for him to be there to fold the last bit of laundry, take out the trash and put the kids to bed, but alas, it’s still on us for the time-being. When he comes home, make sure to find a place for him and let him know he is valued and important. If he asks how he can help, don’t just do everything yourself. Step aside and let him…even if he does it a different way than you would have!

3) Your children have changed.

Someone once said that with regard to children, the days are long but the years are short. Any parent will agree that some days you can’t wait until bedtime, and then before you know it, they are off to college. That being said, children grow, change, develop and mature very quickly. Your spouse may not know how to talk to, relate to, or play with your children, and may try the old (younger) tactics from before he left. Try to ease him in and give him clues to your children’s new abilities and interests so that dad can re-establish a relationship without you telling him how to do it (or how not to).

This is the big one. On top of realizing that your relationship isn’t always a fairytale, that you can be strong and independent, that the entire family dynamic has shifted — the two of you get to be physically intimate. Finally after missing each other, and hyping it up during communications, the time has come. The best recommendation is to communicate and have realistic expectations regarding your love life. If you feel that you need to first reconnect and get to know each other again, let your spouse know. Maybe you need some intimate conversation, alone time, cuddling, or need to go on a date first. Even if you jump right into it (hello, soldier), it’s recommended that you are both in a connected place relationship-wise before you get into the full swing of things again.

Being A Couple At Home

Things may feel a bit different than they did before he left, but allow everyone the time required to reconnect and find your new normal. In the meantime, try not to worry too much and know that all will be well after an adjustment period. Focus on positive thoughts instead worrying about the near future. Think about the moment your eyes will meet again, the smiles, the embrace and that kiss — it’s going to be epic.

Krystel is the mom of two and an Army Wife. In addition to Army Wife 101 she is the Co-Founder of SoFluential.com a digital media agency that connects brands with the military market. She has appeared on MSNBC ,FOX LA and formerly was a weekly contributor to HLN's "Raising America". She has written for various outlets including Sheknows and Lifetime and is a big fan of cupcakes and french fries.
February 29, 2016 by Army Wife 101 | 0 comments