Home » Military Life » Deployment » Don’t Be Alarmed: 5 Weird Behaviors Your Soldier Might Display Before And While He Is Deployed
Deployment, Featured

Last night I attended an awesome group here in the Fort Bragg area called “Army Wives Marriage Recovery”. It’s a group for military spouses to confide and talk with other spouses about the challenges of marriage especially when living the military lifestyle. One of the topics I took away when I left was how service members behaviors change before they are about to deploy.

The thought of a deployment is stressful much less actually enduring one. It affects the entire military family but more then anything it affects the service member. You may begin to notice changes in the weeks leading up to the deployment and it’s important to understand why they may be acting different and when to avoid taking it personally. Here are 6 behaviors that your soldier may display before leaving. 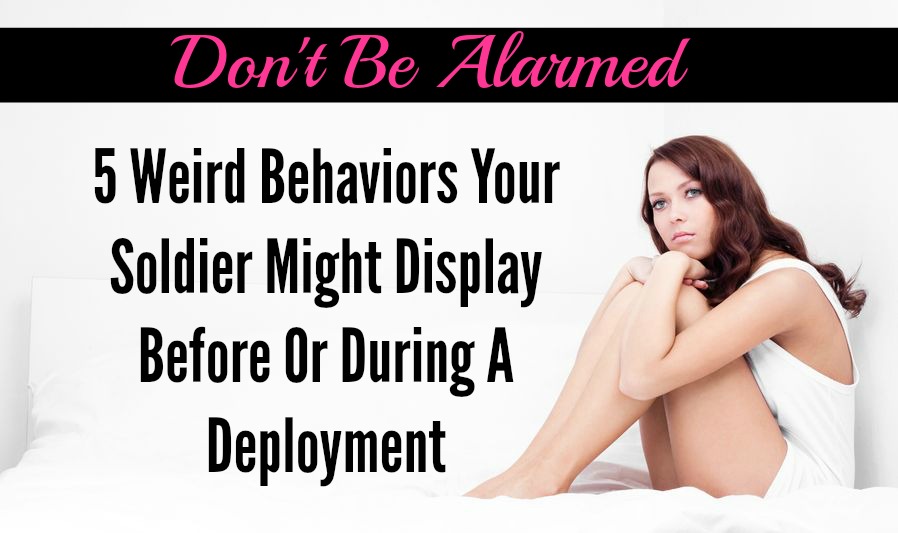 You may notice that your soldier retreats to his man cave more than usual. Whether it’s video games or watching an unusual amount of sports your husband knows cable at his finger tips won’t be an option. TV will become a luxury and in order to make up for the 6-9 months of not having it you may see an increase in his viewing activity.

Again deployments take away the freedom of doing the things that you and I will still get to do . Simple things such as running to the store, or heading to a fast food drive thru won’t be an option. Try not to be offended if it seems like your loved one wants to venture out more by themselves. If there is trust then them wanting alone time in the car they won’t get to drive for a while won’t be an issue.

Knowing you are going to a place that can potentially kill you is no easy feat to deal with. You may notice in the weeks leading up to D-Day that petty arguments will increase and your spouse may snap at you more. This may be because they are detaching themselves (in a weird way) so that it’s mentally easier for them to leave. Don’t mistake this for him not caring that he is leaving ,but sometimes in order to focus on the mission some soldiers feel as if they must do an emotional disconnect. Ask just about any military spouse and I can pretty much guarantee that they have endured this too.

Again don’t be surprised if communication starts to decrease. This will happen before and during the deployment. We woman are naturally inquisitive and part of our wanting to help is feeling like we need to know everything happening. I don’t think the men intend to do this but it’s just part of them putting themselves in the mindset.

The last thing a lot of spouses complain about before, during and sometimes even after deployments is the increase in money spent on frivolous items. The general consensus on why soldiers do this is for entertainment. Before the deployment soldiers are looking for items to keep them entertained during the deployment. During the deployment they maybe contained to the base they are at (FOB) and so going online and ordering things is a form of entertainment and something to do. When they return home they haven’t truly had a chance to enjoy the money they have earned and may want to spend a bit more than usual.

What are some behaviors your loved one exhibits before they leave?

Krystel is the mom of two and an Army Wife. In addition to Army Wife 101 she is the Co-Founder of SoFluential.com a digital media agency that connects brands with the military market. She has appeared on MSNBC ,FOX LA and formerly was a weekly contributor to HLN's "Raising America". She has written for various outlets including Sheknows and Lifetime and is a big fan of cupcakes and french fries.
November 24, 2014 by Army Wife 101 | 4 Comments

4 Comments on Don’t Be Alarmed: 5 Weird Behaviors Your Soldier Might Display Before And While He Is Deployed