Home » Military Life » Deployment » 6 Things All Military Spouses Can Do Online To Keep Them Safe From ISIS
Deployment, Onpost Living

As I write this post about this very serious thing called ISIS and the safety of us mil spouses I am cringing. Not because I truly am choosing to live my life in fear, but because I can’t believe that it has gotten to this level where we actually have to be this precautious. In the military lifestyle PERSEC and OPSEC have always been part of our lives. However, we no longer need to BS and slack on neither. 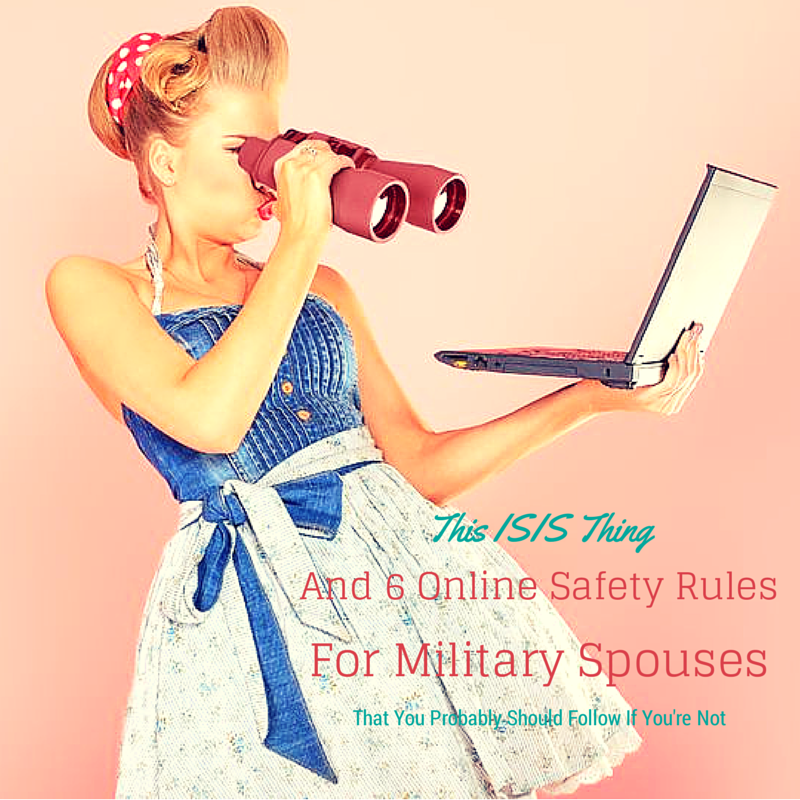 ISIS used to be AL-Qaeda and then they got divorced and became 2 separate entities. Now they both are competitors in terms of who holds more influence over extremist groups around the world.

What You Need To Know

I am sure you have seen all the warnings going out from your husband or wife’s units about being vigilant on social media, as ISIS has made threats that they want to attack and kill military personnel and their family members.

These warnings about ISIS’s threats actually came out in October but in the spirit of not living in fear and not alarming others I just decided to leave it alone. However, this weekend alone I have seen some very alarming posts that I felt compelled to share some safety tips with you.

Here is a post from a spouse that shall remain nameless:

I have been on the very scary receiving end of harassment by multiple individuals of Middle Eastern descent in the past 2 weeks now. It’s ranged from being stared at to being asked if I know anyone who has ‘killed their people’ and the most recent, having my door knocked on while I was home alone. My spouse and I have gone through the proper channels to report all incidents ,and his commander has notified both OSI and the FBI Terrorism Task Force about everything that’s happened.

In addition to her post the amount of strange friend requests I get on Facebook has increased as well as the number of weirdos liking and commenting on my public pictures that are clearly not military spouses. My spouse has received  messages to his .mil email asking him weird questions. A few weeks ago a women walked to my aunt’s car and asked her “If she was a F%$# American”? My aunt ( A Vet and a smart mouth New Yorker who takes no one’s crap) replied “Yea I am a F^%%# American”! The women then sucker punched my aunt in the face.  It sounds crazy and that’s because it is.  It is very real though and is happening all over ,and again while I refuse to live in fear I refuse to end up as a “Lifetime Movie Of The Week”.

So as a reminder for all the spouses who are just to proud to stop informing the free world of every movement them or their spouses makes, here are some safety tips.

1. I know I know “you love your soldier” but in the name of all things safe remove the bumper stickers. They are cute but there are people who surprise don’t like military personnel and frankly it just may draw unwanted attention to you. If your soldier isn’t there to protect you…then what?

Only You Need To Know His Departure Date

2. Stop announcing when your service member is leaving. I am seeing way to many people do this in FB groups that announce the base you live at and have your name next to your profile picture. That’s like going to hide where the chainsaws are instead of getting in the running car!

3. Speaking of groups these little weirdos are making their way into FB groups and pretending to be military spouses. It happened two months ago in a Fort Lewis group, so just be aware of what you post even in private forums.

4. If there was ever anything I learned from my husband it was “situational awareness”. It means knowing what is going on around you. Last month I attended a food truck festival. I was so busy in awe of all the delectable cuisine around me and snapping pics for Instagram that I somehow didn’t notice this woman hanging right over my shoulder eyeing what was in my bag. That was a screw up on my part because part of me subconsciously felt since we were at a festival in a big military town I was safe. Thank goodness my husband noticed and gave her “you better back the hell up” stare! To put it simply folks pay attention at all times.

5.As a blogger it’s not unusual for me to get constant friend requests. Even still I scan profiles carefully and look for clues that tells me whether the person is real or a fraud. For instance is the profile new? Does the person have a common American name but when you visit their profile everything is in another language? Are all their friends from foreign countries? Be mindful of these things before accepting people as friends.

6.  Don’t be overly fearful and don’t overreact, but if something seems off then report to the proper authorities. Be mindful of weird emails, frequent friend requests from random people and even random people coming to your door.

Krystel is the mom of two and an Army Wife. In addition to Army Wife 101 she is the Co-Founder of SoFluential.com a digital media agency that connects brands with the military market. She has appeared on MSNBC ,FOX LA and formerly was a weekly contributor to HLN's "Raising America". She has written for various outlets including Sheknows and Lifetime and is a big fan of cupcakes and french fries.
November 17, 2014 by Army Wife 101 | 8 Comments