Disclosure: This is a sponsored blog post on behalf of Krono’s.

What makes someone extraordinary? It is said the difference between ordinary and extraordinary is that little extra, but more than that, I consider the extraordinary to be those that do the right thing even when nobody is watching. When I think of today’s extraordinary human beings, I think of the military or law enforcement. Perhaps it’s because of our close affiliation with the military, but it’s easy to overlook those unsung heroes that are equally important. These individuals give of their time to help another human being and put the well-being of others before their own. We need to celebrate today’s workforce because each and every person deserves to be recognized…to have a pat on the back. They are so often overlooked but it’s their time…our time to recognize, celebrate and remember that at the core, we are all human beings, working toward a better future for us all. 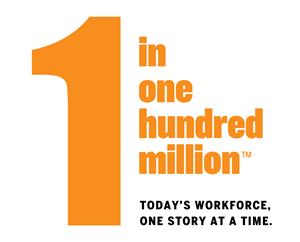 Kronos, is one such company that not only is the leader in workforce management with tens of thousands of customers worldwide, but they have a commitment to celebrating the day-to-day workforce that is so often unnoticed. Their campaign, 1 in one hundred million, is a site devoted to sharing the personal stories of people who do the many important and too-often unrecognized jobs upon which we all rely. Through the web video series, they hope to celebrate the feature special individuals who reflect the character, the commitment and the passion of today’s workforce.

Each month, Kronos releases a new video focused on one occupation. The most recent video features former MLB Pitcher Brett Laxton, or the “Batman”, as he now refers to himself.

Just imagine. It’s game night. The crowd watches as the batter steps up to the plate. He tightens his grip around his bat. The pitcher releases the ball and the batter blinks as he hits a home run. The crowd cheers on as he races to home plate. It’s easy to attribute all success to the players and while their skill is a major part of their success, so is the craftsmanship of the bat that plays a part behind the scenes. That’s where the “Batman” steps in.

It was at the young age of nine that Brett hit a home run over the fence and can still remember the exhilarating feeling to this day. He went on to play for Louisiana State University and then entered the major leagues as a pitcher. His real love was hitting so this former pitcher, now 15 years later, makes the #1 bat in baseball that are held by many major league players such as David Ortiz and Jose Reyes .

All bats are made and sanded by hand from logs selected and transported from Pennsylvania and New York. With over 100,000 bats under his belt, he wants to produce a quality product to prolong America’s past time and perhaps put a bat in the hand of a child who may one day be a major leaguer.

That is just one story of an ordinary job done by an extraordinary human being.

Other videos in the 1 in one hundred million campaign include a 4th grade teacher, Isheba Barker, whose love for the children and their education and success fuels her to be the best that she can for them. Another video features Catie Boles, waitress and mother, who makes it her personal mission to bring joy to every diner. More profiles include a firefighter, a nurse, a union electrician and more. The upcoming May video will spotlight a sergeant in the National Guard so stay tuned. Join the campaign’s free subscription today to receive updates on each video posted.

I have personally enjoyed every video of these extraordinary workers. Join the campaign and celebrate today’s workforce, one story at a time.

Krystel is the mom of two and an Army Wife. In addition to Army Wife 101 she is the Co-Founder of SoFluential.com a digital media agency that connects brands with the military market. She has appeared on MSNBC ,FOX LA and formerly was a weekly contributor to HLN's "Raising America". She has written for various outlets including Sheknows and Lifetime and is a big fan of cupcakes and french fries.
April 15, 2015 by Army Wife 101 | 0 comments