Home » Featured » Life With Army Wife 101: I Spoke At Spark and Hustle Thanks to Lifetime Moms…My Experience!
Featured, Life with Armywife101

We talk a lot here about military life, travel , product reviews and more. One thing more of you have asked me to talk about is my blogging career.

I am not ashamed to admit that I have taken something I love which is helping you guys and turned it into a full time career all from home. I think it is important amongst everything else to share the opportunities I receive with you guys to motivate you to create your own personal successes.

My e-book to be released on Kindle and online will be out soon showing you exactly what I did to create a full time portable career for myself as a blogger.

All that being said as you may know I am a Lifetime Moms Contributor and have done some cool videos for them as well. As one of the sponsors they asked me to speak recently at Good Morning America Contributor Tory Johnson’s Spark and Hustle conference, a twenty city tour for women to help empower and take charge of really growing our businesses. 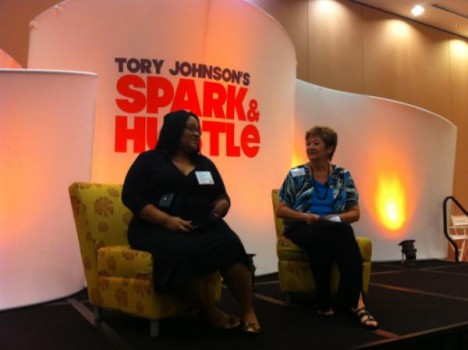 When they made their stop in Raleigh I made sure I was there amongst some of the top women in business and social media. On my panel Saralyn Collins and I discussed “Muscle Marketing” . This means using more muscle and networking to build your business and less cash.

My adrenaline was pumping  and my mind racing as I stepped on to the stage wondering how I looked, would I freeze up , would these people even care what I was talking about!  To my surprise the attendees were very engrossed in what I was saying as I told them why I started Army Wife 101 and how I built our little community. I even made people laugh…haaa me!

Check out some of my video footage below:

Here Are My Final Words With Insert of Grand Finale Applause :)

The event itself was amazing and I learned so much information from all the wonderful ladies especially Tory Johnson whose story is amazing. 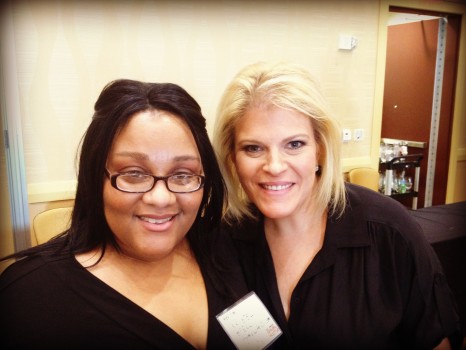 Me and Tory Johnson…No idea why my glasses were hanging down! 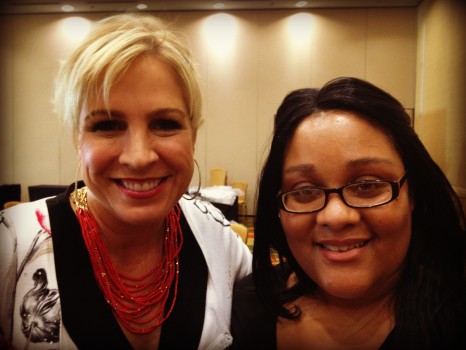 The best for me in addition to all the wonderful ladies I networked with, was that I and two of the representatives from Time Warner Cable presented a woman with a $10,000 prize package from Lifetime Moms to further her business. I had to hold back tears as she had no clue she had won and was in total shock to say the least. This was an amazing feeling and I hope I have the chance to do it again.

There’s no doubt that this was a huge experience for me ,but for me a woman who tends to short change herself at times I truly learned that I was helping people. The tweets I received were amazing and I was amazed at the impact I

Learn about Spark and Hustle.

See me at Lifetime Moms.

Disclosure: I was invited to speak at Spark and Hustle on behalf of Lifetime Moms with whom I am contributor for. My expenses were reimbursed and no other form of compensation was received.

Krystel is the mom of two and an Army Wife. In addition to Army Wife 101 she is the Co-Founder of SoFluential.com a digital media agency that connects brands with the military market. She has appeared on MSNBC ,FOX LA and formerly was a weekly contributor to HLN's "Raising America". She has written for various outlets including Sheknows and Lifetime and is a big fan of cupcakes and french fries.
June 27, 2012 by Army Wife 101 | 0 comments