Home » News » Stripping Down To Your Bare Essentials to Bring Attention to PTSD…Yay or Nay?
News

This morning I scrolled through my Facebook news feed and saw this title of a Yahoo story ” Military Wives Strip Down to Raise Awareness About PTSD: Battling Bare”.

A Quick Back Story

Ashley Wise’s husband was a brave soldier and former Marine who had served two tours in Iraq. On his final tour of duty from overseas he came home broken and with PTSD .

Ashley did her best to reach out for assistance on-post but as many feel ,it seemed like there was no way to get that without her soldier somehow feeling like he would be reprimanded or put his career in jeopardy.

Ashley wanted to bring awareness to this ongoing epidemic in the military community and took the most popular way of gaining attention. She had a friend write the following wording on her back and went to the best viral outlet there is …Facebook! 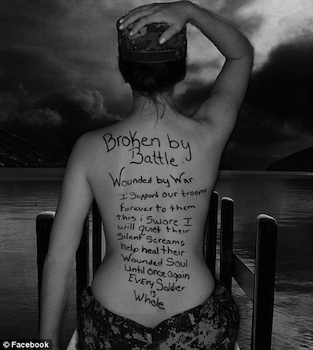 “Battling Bare is a private organization in its beginning stages currently seeking non-profit status.  We may challenge the status quo of what is acceptable and appropriate for a woman to do or how she is to behave. Because our husbands battle daily with their demons of war, we have to. These unseen wounds of Soldiers all over the world have the names depression, anxiety, night terrors, PTSD, and others. As wives, we have tried everything we know to help. Searching actively for a way to answer the question we all ask – “what can we do, we are just the wives?”- the idea for Battling Bare was born.  Our hope is that together we can inspire more “silent supporters” to “battle back” and let our voices be heard by creating an outlet of support and providing resources for wives that are at their wits end trying to help their husbands heal”.

Quite honestly I think what Ashley is doing is wonderful. There is such a crappy stigma that goes along with getting help in the military and in this particular case I fully understand why she is feeling the need along with several other wives to go ahead and help their soldiers get the treatment they deserve.

With that said I do have to wonder will the true message of what they are doing get “lost” in a bunch of pervs looking at their bare backs ?

Will the authorities in charge who have the power to make this right and provide the proper resources  take  it seriously considering the way they are going about it?

On the other hand I think the way they have want about it is pretty unique and if nothing else it will catch enough people’s attention to let them know what is really happening with PTSD and the families of those who are suffering from it.

I’ve taken a look at the pictures and while they are not bad at all (in my opinion) I’ll just say guys will be guys and I hope the select few who can’t put their hornball-ism to the side for a moments won’t ruin it for the people who truly do see the true message behind Battling Bare.

So I ask do you support the cause…do you think Battling Bare will bring true awareness to this ongoing issues amongst our military?

Lots of comments get placed on the Army Wife 101 FB page.. Click here to see what others are saying about this post!

Krystel is the mom of two and an Army Wife. In addition to Army Wife 101 she is the Co-Founder of SoFluential.com a digital media agency that connects brands with the military market. She has appeared on MSNBC ,FOX LA and formerly was a weekly contributor to HLN's "Raising America". She has written for various outlets including Sheknows and Lifetime and is a big fan of cupcakes and french fries.
June 27, 2012 by Army Wife 101 | 17 Comments

17 Comments on Stripping Down To Your Bare Essentials to Bring Attention to PTSD…Yay or Nay?