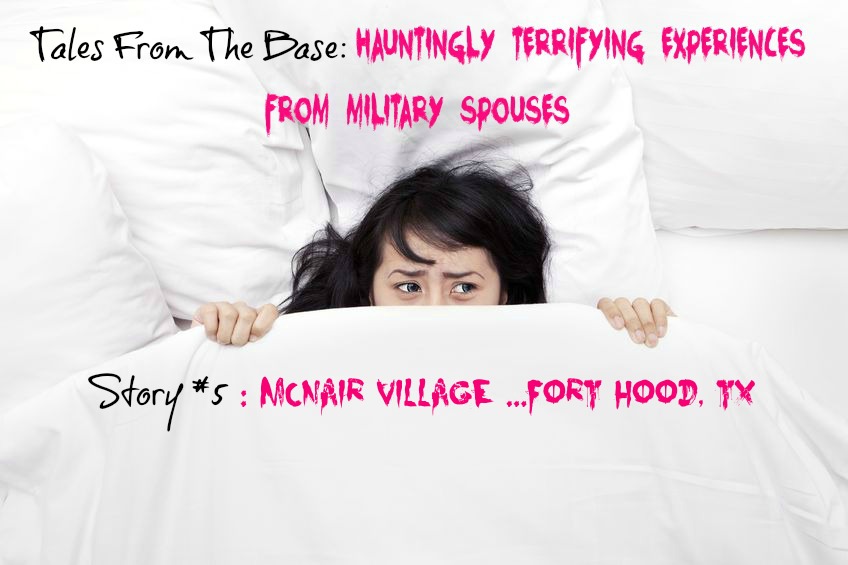 I live in Mcnair Housing in Fort Hood Texas. I have been here since Feb 2011. When we first moved in we never felt that “at home “ feeling like we usually do after we get all settled in. After a few months my daughter who was 3 at the time (speech problems), started to wake up every night screaming saying no no no. I of course thought these were night terrors and tried my best to comfort her as much as I could. I then started to notice her talking up to the ceiling, in her room by herself, and basically anywhere in a small space. It started to make my husband quite nervous so I of course asked her who she was talking to. She told us it was her friend. I initially and logically thought oh ok she has an imaginary friend, but when asked what she looked like my daughter put her hands up made a creepy face and growled.

So after that experience which petrified my husband I just went on and didn’t let anything bother me. I figured if something was there and as long as it was not bothering me or my family who cares. Soon after that experience my husband deployed. My daughter continued with the terrors and talking for a few more months than it just all of a sudden stopped. Of course I didn’t even question it. During this deployment (about mid way through) I had some friends over for dinner and drinks. While we were just sitting there her husband stopped and reacted in a strange way as he jumped and turned around. He said he heard a girl say hi behind him , behind the couch. At this time my daughter was upstairs asleep in her room. This made him so uncomfortable he wouldn’t come back in the home. I again did not hear anything.


It Got Out of Hand

After the return of my husband is when things started to get a little out of hand. He kept hearing a soft humming of a little girl sing near the stairs. He would go and check on our daughter who was now 4 almost every night and she was always asleep. He started to feel uneasy that we started to sleep downstairs. While we would sleep downstairs he would wake me up frightened because he said he saw feet coming downstairs as if our daughter was awake walking down…but then nothing. He said he always would just see feet.So we started to really get suspicious of the house. Was it a little girl?? Were we just hearing our neighbors??? Are we crazy??
To help him be more comfortable at home I began to do a lot and I mean A LOT of research. I found out some pretty interesting things about this area. If you have time just google Mcnair, or Fort Hood history. Anyway,we also have a pretty creeky all concrete basement. From day one I have never been able to go downstairs after dark. Well after my husband came home we started to feel a rumble under our feet, yes a full blown rumble. We thought “hey maybe the neighbors are running around”,but no one was home.

Well during this entire time little things kept happening to my husband , his friends who would stay over wouldn’t come back because of some creepy things or feelings of being stared at….. but for me I guess I just ignored it….until one particular night.
We finally decided to sleep upstairs and I was sooooo happy!…. I was sleeping so good and it was really late when all of a sudden the bed shook. Pretty hard as if my daughter woke and was trying to wake me up ,but out of childhood fear I kept my eyes closed and waited….nothing. So as I sat there with my eyes closed I started to think smart. I said to myself….”ok my husband could have moved, or the dog could have moved”….so I waited….my husband moved but it wasn’t the same….my dog moved….but it wasn’t the same. Then all of a sudden right by my face the bed shook again and harder. Just a hard aggressive wake up nudge right by my face! I froze and fear and screamed leave me alone…..I stayed awake the rest of the nigh in fear.
That morning I told my husband and yet again we began to sleep downstairs……

After a couple of days of this event happening to me I began to notice more weird unexplainable things…but then one night in particular my husband and I began to argue….pretty heated since we are both stubborn. I finally yelled at him and said just leave me alone im going to sleep don’t talk to me!!! He agreed and turned over on his part of the couch and I turned over on mine. Not too long after I heard my name “AMBER” like a loud clear enough voice that I jumped up thinking it was him and yelled at him saying I told you not to speak to me!….He had no idea what I was talking about…..I was so confused that I just said nevermind . It was so clear that I answered it….whatever “IT” was.

This became the moment I was really alert on everyone was scared.My friends would come over and feel a weird feeling The ones who would stay the night would say that they felt like someone was looking at them in the kitchen or while they laid on the couch. Most refused to ever spend the night again or be in this home alone. Every night we close the closet doors upstairs and every morning they are open. We bolt the basement door to wake up every morning to it looking like it was trying to open and so much more.
We had a neighbor who after asking if they ever felt anything weird admit she actually slept with a satanic bible on one night stand and regular bible on the other. Im not religious but that was alittle freaky to hear…..she doesn’t live here anymore but the activity still remains.

This continues still til this day with the most recent activity is when I was outside with a friend and my husband with our kids and my dog….my upstairs window, the light came on the blinds were rattling like someone was in them an ran then the light went off…but all of us were outside….my friend left….
I could go on and tell every sngle crazy thing that has happened but we would be here all day……we still live in mcnair still to this day, same house….same creepy noises….still cant go down stairs…..still hear the rumbles and the humming….and every person who comes over to my home does not like to come back…..
Hopefully soon we will be moving…. because right now I feel whatever it is has conncected to us.……….
TO BE CONTINUED…..
signed…..the one who wants to move but cant…..

Krystel is the mom of two and an Army Wife. In addition to Army Wife 101 she is the Co-Founder of SoFluential.com a digital media agency that connects brands with the military market. She has appeared on MSNBC ,FOX LA and formerly was a weekly contributor to HLN's "Raising America". She has written for various outlets including Sheknows and Lifetime and is a big fan of cupcakes and french fries.
October 20, 2014 by Army Wife 101 | 5 Comments

5 Comments on Tales From The Base: McNair Village Again…Fort Hood, TX