I always receive questions that are really important and that a spouse really should know. Some of the below may seem rather common sense but what’s common to one person may not be so common to another. So rather then try to answer every individual email I decided to compile what I feel every military spouse should know. Feel free to share this with a new spouse as well. 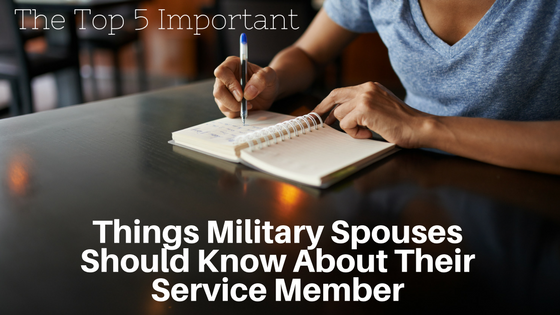 Yes the good ole SS# is a must have. I know my husband’s better then I know mine to the point of when I am asked mine I stutter because I’m in shock that I was asked that. “How dare you ask me for my SS#, you know I haven’t had to give that out since I got my ID card”! No but seriously ladies your spouses SS# is basically the key to anything you need to do in the Army, whether it means going to the clinic, making an appointment or dealing with any type of Army related business…you will need it.

The infamous stands for “Military Occupational Specialty”.  You should know  his/her soldiers MOS (their job in the military).  MOS usually go by two numbers followed by a letter. For instance my husband is a 15N which is a Avionics Mechanics. So when your sitting around your next group of Army Wives and someone says what does your husband do… now you know. Yes people ask that but I rather they ask that, then rank. For a list of MOS you can visit this MOS List. Keep in mind MOS #’s change quite often for whatever odd Army reason.

It is extremely important to know what your spouse’s unit info at all times, but more so when they are deployed. In the event anything happens to you or a family member and you had to send a red cross message, you would need to know this info. Make sure you ask your spouse to write all this information down for you and keep it in one spot.

4. The Name of The Post & Where They Are Stationed

Please spouses– when hubby or wifey gets orders take time to look up the Army post listed on the orders. I have seen many people call Schofield Barracks Fort Schofield or Hunter Army Airfield Ft Stewart Airfield. This is important for the reasons listed above, but also because typing in the wrong name in google can lead to confusion when looking up specific information about a Army post.

Of course my husband has to be complicated but he did make a good point , he suggest soldiers go over their ERB (Enlisted Record Brief) with their spouses in the event the soldier is unable to communicate with you, then you will have a general understanding of important information that can assist you in obtaining benefits the soldier is entitled to should the situation arise.

The items mentioned are just some of the most important factors in the military lifestyle. Although I may joke about them it is essential that you memorize them and familiarize yourself with them, should the need arise for this information.

Share items you think every military spouse should know in regards to their service member in the comments section below.

Krystel is the mom of two and an Army Wife. In addition to Army Wife 101 she is the Co-Founder of SoFluential.com a digital media agency that connects brands with the military market. She has appeared on MSNBC ,FOX LA and formerly was a weekly contributor to HLN's "Raising America". She has written for various outlets including Sheknows and Lifetime and is a big fan of cupcakes and french fries.
November 15, 2010 by Army Wife 101 | 8 Comments