Yesterday I received a question/comment in my which I posted on the Army Wife 101 Facebook Fan page that asked: 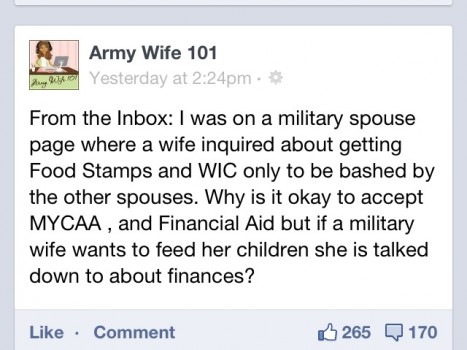 It’s no secret that some people in general can be judge mental because that is just life. I think it is in some people’s DNA to speak as if they have never endured any life challenges. In a weird way I accept that.

Yet as contradictory as it may sound I am bothered by the high and mighty committee when it comes to military spouses. While most spouses who answered understood that life happens, quite a few intended to demean others who sought some kind of assistance that would aid in feeding themselves and their families.

Everything from “don’t have kids” to “use spermicidal cream” to when I was a E-1 we sacrificed and made it work so you should to! Oh and believe me those were the “nice” things said! I had to block some of the other comments.

We as a military family despite any other differences know that we all live one equal life when it comes to this lifestyle. This meaning that our service members all have to move up the rank and pay scale and are aware of  the tolls that some PCS moves can take financially.

Then there are those times when the military screws up your pay and it takes forever to fix it. In my case there was also the time when I moved to Hawaii and was unaware that we could have charged food we purchased at base lodging. We spent much of our savings on food and even when we got reimbursed that to had to be spent on things for the house that we needed, because it took almost two months for our household goods to arrive.

I know it’s an election season and the public assistance issue is at the forefront. That aside, as military spouses we know the sacrifices that service members and we as families make. Sure I think we (us personally) did well financially as a military family despite some of our struggles. Should the military make more ? Of course they should!

Yet the fact is they don’t because of that little four letter word known as “rank” and something called family size , everyone’s financial situation is different.

It’s so easy to say what you sacrificed when your at the better end of the pole financially then another person. While there are stigmas and some people who do definitely abuse the system it’s certainly not fair to make others feel worthless and horrible for seeking a little help.

Huffington Post did an article about military families on food stamps a little while back which had some shocking stats. The numbers (in my opinion) tell me that this is far deeper then some people who are abusing the system. It tells me that a lot of our military families need extra government assistance just to make it.

*The base pay of most recent enlistees — from corporals on down — is at or below the $23,050 poverty rate for a family of four.

* Over $101 million in food stamps have been redeemed at commissaries nationwide.

For those who need help:
A twitter friend reminded me about a resource that is available to military families who may be in need of some supplemental assistance because guess what life happens.

Find out if you are eligible here.

Krystel is the mom of two and an Army Wife. In addition to Army Wife 101 she is the Co-Founder of SoFluential.com a digital media agency that connects brands with the military market. She has appeared on MSNBC ,FOX LA and formerly was a weekly contributor to HLN's "Raising America". She has written for various outlets including Sheknows and Lifetime and is a big fan of cupcakes and french fries.
September 27, 2012 by Army Wife 101 | 19 Comments