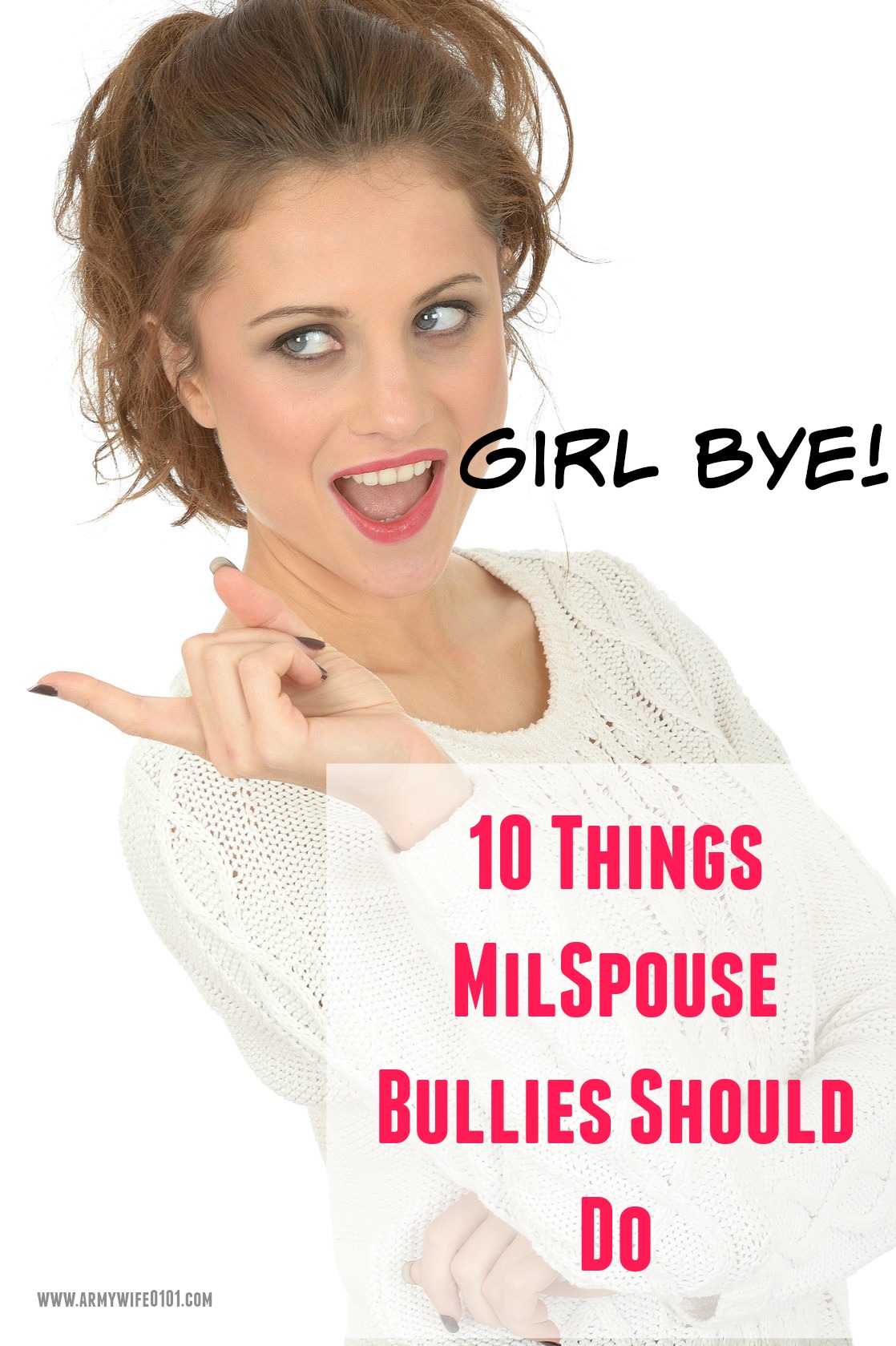 Almost 3 years ago I made a video asking why are people still using the word “DEPENDA”. In addition to what it stands for it’s just ugly and corny. I mean if I was punk and immature enough to be a keyboard bully, I think I would be surveying #TeamDepignorants for another word to use.

Here it is three years later and we still have clueless people whom take the words hypocrite and contradictory to new heights. What idiotic pleasure it must be to sit and talk about military spouses who sit around all day doing nothing, yet these same geniuses have valuable time to stalk individuals and groups several times a day. Then after all that they actually have time to formulate fake posts, screenshot posts from groups , and post them on a FB page. Isn’t that a lot of work for someone who supposedly is doing something with their lives and has a job?

The Attacks On Army Wife 101 Are Hilarious

The funniest is when they try to hassle and call me names that clearly reflect the envious state their mind is in, or their lack of knowledge. I mean I ONLY started a blog five years ago that allows me to take care of my household in its entirety. Not to mention I’m VP of Marketing and Sales for a military spouse owned company that does amazingly, and Co-founded a subscription box service for military spouses. I’ve interviewed celebs, my kids have met the First Lady, and I’ve been on national TV weekly. My accomplishments to many are proof that military spouses do more then sit home and eat twinkles. *Side note-No shade to the Twinkies because I use to like them, but now they taste like chemicals*. Either way I’m not bragging, but I’m proud of my accolades and the theme here…military spouses actually do have goals and careers.

“Depignorants”(don’t ask it… makes sense though in my mind) don’t realize the stereotypes they are so upset about is actually being perpetuated by them; not by the so called Dependas.

Here are 10 Things DePignorants Should Do:

1. Become a REAL Sleuth Or Attorney- Seriously some of you women and men are super talented. You are like sleuths online taking and putting pieces of people’s lives together to ultimately embarrass them. However, once you get your high what does that do for you? I mean shouldn’t your Busted-gasm have a prize or some kind of real point to it? Then again an attorney may work because you guys can argue the hell out of stupidity.

2. Get A Makeover- I’m appalled at the amount of people who will speak on someone’s looks without first making sure their profile picture is POPPIN.

3. Stop Being A Bandwagoner- You can tell the chickies who make fun because they always have been bullies in comparison to the ones who are trying to do it just to be down. We can tell that that’s not really you babe…stop trying so hard and leave the dark side. Don’t be a minion.

4. Post This On Your Dependa Pages- Yes PLEASE post this so you can see how silly you look and drop a few coins in my pocket while your at it!

5. Realize That Most Of Us Don’t Really Care- For some reason when a rational person comment’s on how stupid these pages are, they are considered jealous or a whiner. No, actually some of us just really think you and the pages are stupid.

6. Yes Some Of Us Are PHAT and Fat- Please realize we get it! It’s no secret that some woman have weight problems. I’d love to know how it affects you? Matter of fact the next time you call me or another mil spouse a name can we at least get a full body shot so we can be on equal ground. I may not be proud to be a girl of size, but I own it like a BOSS!

7. Whatcha Mad About– What is it? Why are you so angry? Are you mad your husband is deployed, are you just evil, did your parents raise you right? Look in the mirror and say “321, 123…What the heck is bothering me”?

9. Read This – In 2012 Blue Star Families did a survey of 5,100 military family members in which 9% admitted they had considered suicide. That’s just the ones who admitted it. There is no telling who was to afraid to even talk about it. I’ve received numerous emails over the years from young ladies who were at the end of the rope because they were being bullied. There’s no way in hell I would ever want to be tied to someone feeling so low, that they try to take their own life.

10. Go Make A Friend- I get it…you like being a bully online. Fine! If being corny, immature, and saying silly cliche catch phrases that make you sound like a ditz is your thing..I’m cool with it. However since you hide your face online most of the time anyway, how about going out and making a friend. Maybe you could privately contact one of those ladies you were so cruel to in a group and ask her if she needs a listening ear.

The next time you see cyber milspouse bullies…send them this.

Krystel is the mom of two and an Army Wife. In addition to Army Wife 101 she is the Co-Founder of SoFluential.com a digital media agency that connects brands with the military market. She has appeared on MSNBC ,FOX LA and formerly was a weekly contributor to HLN's "Raising America". She has written for various outlets including Sheknows and Lifetime and is a big fan of cupcakes and french fries.
January 23, 2015 by Army Wife 101 | 0 comments