I’ve always been an advocate of having a good cry period, but especially during deployments. Sometimes even when you aren’t sad you should put on a good love story or sappy movie and “Let It Go”. Sorry couldn’t resist that! 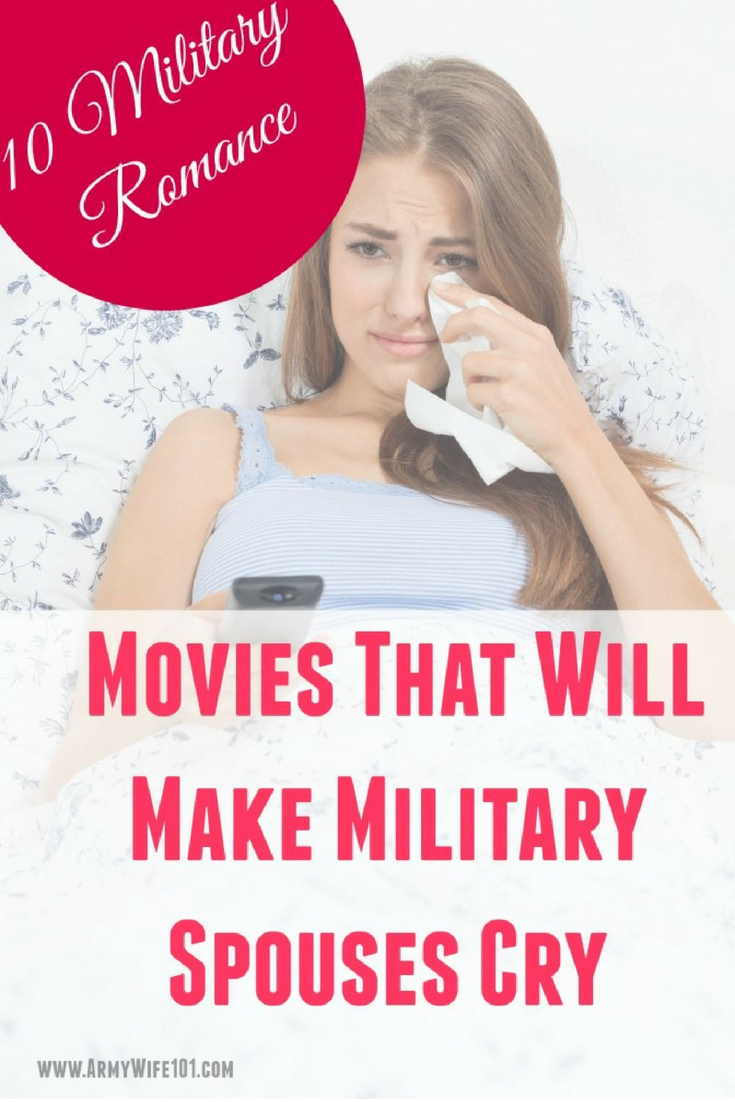 There are a million non military movies that can make me teary eyed, but let’s be honest the military ones are the best. We can actually relate to what’s happening (sometimes) therefore making that get it all out cry even better.

Here are 10 military movies that you watch with a box of Kleenex close by.

1. We Were Soldiers– Shares the stories of soldiers during the beginning of Vietnam. I still have yet to catch the full movie, but I remember the scenes of military spouses meeting and coming together on the base. The scenes with military spouses really show how far we have come in terms of protocol, race relations and more.

2. The NoteBook–  I am assuming that half of creation has seen this movie, but if you haven’t it’s truly an amazing love story. It’s not quite a military themed movie but one of the main focus was the lead couple loosing contact because one half went to war.

3. Pearl Harbor– No explanation necessary other then the love story twist in this movie will make  you think and cry too.

4. Dear John– Channing Tatum fans will love this story of a soldier who falls in love with a college student but then is sent off to war. Can their love stand the distance and the test of time? It’s from the author of “The Notebook” so it has all the oozy gooey love you need. It also involves something that we don’t do often enough…letter writing.

5. American Sniper- I haven’t seen this one yet but I do know that it does a good job of describing what spouses go through on the home front. Writer Rebekah Sanderlin explains so eloquently here why this movie is for military spouses. This movie is still in theaters but I hear the book is just as good.

6. Top Gun– If you were a pre weirdo Tom Cruise fan then there are some sappy moments in this story of him as a naval pilot in training. He falls in love with a civilian instructor and of course the their love is documented to the tune of Berlin’s “Take My Breath Away”.

7. In The Land of Blood and Honey– A soldier fighting for the Serbs falls in love with a Bosnian woman who is a captive at the camp he is overseeing.

8. An Officer and A Gentleman– Stars Richard Gere and Debra Winger. Richard (Zack) as an arrogant kind of cocky aviator from a military family and Debra as a local girl who lives near the aviation school and is use to the advances from charming handsome aviation candidates. However they catch the eye of each other and the rest is a somewhat tragic but happy story. Tissues please!

9. Brothers– A man newly released from prison begins to overly comfort and fall for his older brother’s wife. The older brother is a soldier is a POW who everyone assumes is dead.

10. The Christmas Card– According to my friend Kya this is a tear jerker , has that Hallmark feel, and of although a Christmas movie it’s a great watch anytime. “A US soldier visits the town from where an inspirational Christmas card was sent to him by a church group that mails cards out to servicemen as a goodwill effort”(via IMDB).

Krystel is the mom of two and an Army Wife. In addition to Army Wife 101 she is the Co-Founder of SoFluential.com a digital media agency that connects brands with the military market. She has appeared on MSNBC ,FOX LA and formerly was a weekly contributor to HLN's "Raising America". She has written for various outlets including Sheknows and Lifetime and is a big fan of cupcakes and french fries.
January 22, 2015 by Army Wife 101 | 0 comments