Although fairy tales often end with a wedding and a “happily ever after,” in reality, marriage is just the beginning.

A marriage marks new responsibilities, choices, and acts of love that aren’t always romantic. Marriage can be both wonderful and challenging and takes two committed partners to make it work.

Sometimes things get so impossibly tough, a spouse is faced with the question of “Should I stay or should I go?” 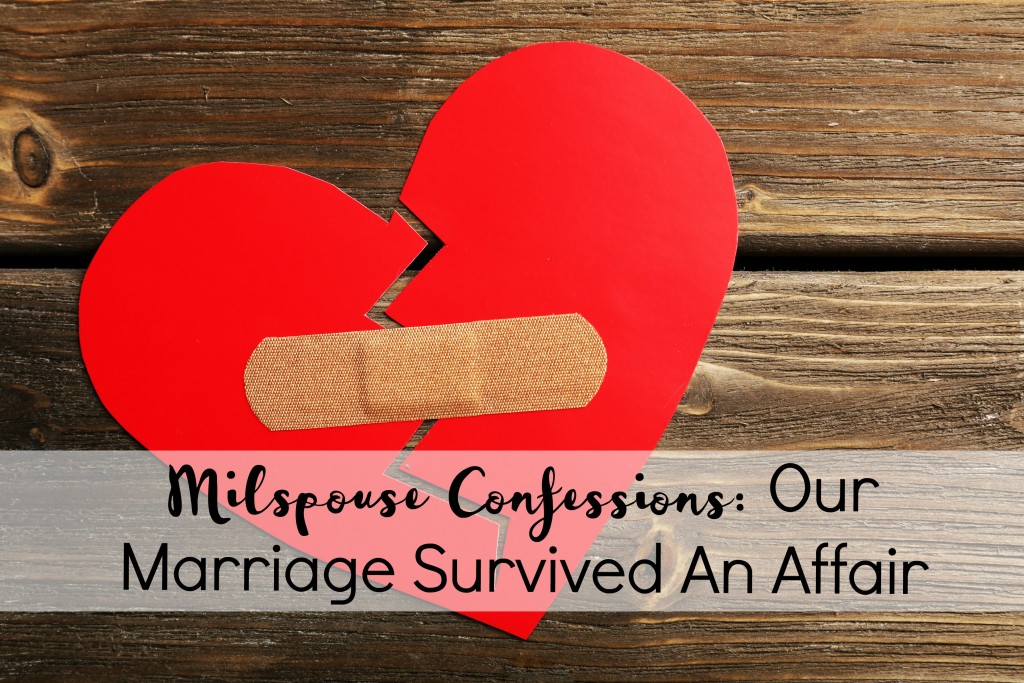 An Indiscretion
No one ever wants to hear that their spouse has slept with someone else behind their back. But does an affair instantly equate to the end of a relationship? Not necessarily.

I spoke with two military wives who gave their marriages a second chance after everything shifted. For privacy, their names have been changed. I thank them both for their honesty, cooperation and trust on this delicate subject, and applaud their strength and resiliency.

Rebecca and Grant
On their wedding day, Rebecca was 20 and Grant was 21 years old. The couple had dated for three months prior to their nuptials, and Grant was already a father figure to Rebecca’s daughter.
The family of three soon grew into a family of four after the birth of a son.

Rebecca shares of the day it all changed. “It was about a year and a half into our marriage. He was away for military training and I found out he was cheating through excessive minutes being used on our phone plan.”

Leading up to this discovery, she and Grant had been fighting for a few months while undergoing their long-distance relationship. When she confronted him, he didn’t deny the affair. “I was livid and hurt. I couldn’t stop shaking,” recalls Rebecca. She called her best friend in hopes that she could offer solace and advice. Rebecca thought about leaving Grant, yet questioned how she would support herself and her children if she terminated the relationship.

Everything could have easily ended right then and there, but it didn’t. “We decided to build our relationship back up,” shares Rebecca. “The process was long — it took baby steps upon baby steps.” Rebecca knew that she and Grant still loved each other and that they had a family to consider. She was honest about her feelings and had to learn how to trust Grant again. Part of their deal involved leaving everything in the open with no secrets. Their communications vastly improved after the affair, and they were able to start over from square one, and do it right.

To assist with rebuilding their relationship, the couple contacted Military One Source for marriage counseling. Additionally, Rebecca reached out to girl friends and made the difficult, but rewarding decision to fully forgive Grant. She shares, “We didn’t talk about it again for another five years. After the both of us had the time to heal and hash it out without emotions getting in the way.”

What does Rebecca and Grant’s marriage look like today? The couple has now successfully been married for eight years, they have a third child, and as Rebecca describes, “Our relationship is as strong as ever today.”

I asked their secrets for success and she shared, “We have found that we have to be honest. If something is bugging us, we let it out. Also, we strive for a date at least once a month, but shoot for twice a month. When it comes to our family, we’re a solid front with the children.”

For others who find themselves in a similar situation, Rebecca recommends, “Trust your gut. If something doesn’t feel right, figure out why.” She adds, “I know a lot of people don’t believe in second chances when it comes to affairs. Sometimes though, after an affair has wreaked havoc on your relationship, you can then build upon the mess, creating a stronger foundation than before. We’re all human, and make mistakes.”

Lindsey and Andy
Lindsey and Andy met as teenagers, and were married at age 23, after dating for just over one year. She instantly became a military wife, and the two were whisked away from their hometown to a new home 2,000 miles away.

After two years of marriage, they decided to have a baby. When the baby was 9 months old, Lindsey and Andy took a trip to rekindle their already rocky sex life. Apparently it worked, as this vacation resulted in another baby, who would be close in age to their first.

“Although our friendship and emotional connection has always been very deep, our sex life has never been amazing,” shares Lindsey. “Andy loves through touch and I do not. We would butt heads about this fairly often.” As is a common occurrence with pregnancies and babies, their sexual relationship took a back seat.

Andy loved to be social and meet new people. “I had two young children and didn’t share this desire at the time,” recalls Lindsey. “I understood his needs and since I couldn’t be there socially for Andy, I had no issues with him going out with friends and having a good time.”

Lindsey recounts the night, four years into marriage, when everything changed. “Andy came home late with a confession. He had met a woman whom he liked very much.” It started innocently enough — he met her with friends, but then started seeing her one-on-one. “That night, he had slept with her,” shares Lindsey, “and he admitted that he was angry with himself, very sorry, but was also very much in love with Lauren, this other woman.”

Lindsey wasn’t sure what to think or how to react. She heard Andy out, asked numerous questions, and felt emotionless for several hours. Lindsey then settled into anger at the thought of her marriage being over, being left with two children under two, and with a post-baby body. “How could I stay? He could not take this back.”

Andy explained that he still loved Lindsey and didn’t want their marriage to end. “I realized I could not figure this out alone and left to talk with a good friend,” says Lindsey.

Lindsey’s friend listened and explained that marriage isn’t always black and white and that she knew several couples who made their own rules. Lindsey had never given this any thought and went back to talk to Andy about how to potentially move forward together.

“For days we discussed what to do, and surprisingly we were on the same page on nearly every question that came up. I knew I could handle this,” shares Lindsey. Andy said goodbye to Lauren so that the couple could move forward together with a fresh start.

Lindsey and Andy took advantage of Strong Bonds Marriage Retreats and she is an advocate of the Military and Family Life Counseling (MFLAC) program. “Talk therapy really helps me,” she shares, “and the retreats are the best thing the military has in place to aide with marriage counseling.”

How are Lindsey and Andy today? They recently celebrated their 5th wedding anniversary and are in a better place emotionally than they have ever been. Lindsey recommends that if you find yourself in a similar situation, you examine what you can bring to the marriage. “I chose not to focus on what I wish my husband would or wouldn’t do. I can only control my own behavior and have trust and faith in my partner.” Lindsey closes with, “We have never communicated better! I am so glad I took a step back out of the situation and didn’t get stuck in my anger.”

Moving Forward Together
Dealing with infidelity isn’t easy and both of these couples demonstrate that there can be life after an affair.

If you find yourself in a similar situation, these resources can help:
Strong Bonds Marriage Retreats
Military Family and Life Counseling
Military One Source Non-Medical Counseling

Although feelings were hurt and trust was broken, both women recognized their right to be upset, found support, and made the enormous decision to forgive. Both couples had a choice and they chose each other. Now, with open communications and newfound trust, they move forward together, hand-in-hand.

Krystel is the mom of two and an Army Wife. In addition to Army Wife 101 she is the Co-Founder of SoFluential.com a digital media agency that connects brands with the military market. She has appeared on MSNBC ,FOX LA and formerly was a weekly contributor to HLN's "Raising America". She has written for various outlets including Sheknows and Lifetime and is a big fan of cupcakes and french fries.
January 21, 2016 by Army Wife 101 | 2 Comments

2 Comments on Milspouse Confessions: Our Marriage Survived an Affair