Back in 2013 I along with a good friend of mine did a fun and whether we want to admit it very true post of 10 types of military spouses you will encounter in the military lifestyle.

In talking to my friends Angela from Mommy PR and Tiffany from The Mrs Tee,  came up with a few more military spouses you will most likely encounter during your PCS travels. While these types can apply to everyday life, we see them even more frequently in the military community because of all the diverse backgrounds thrown together on a military installation.

Oh and relax this is all in fun! 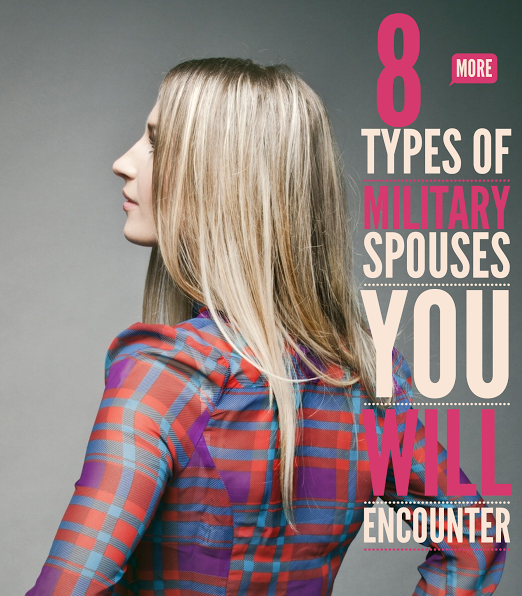 This is the spouse who loves every military base she has ever been to. She never finds any flaws with duty stations and looks at you in shock when you say you hate it. You in a sarcastic not really kind of way-hate her because you admire her zest for finding the good wherever she goes. Everytime you see her you are reminded of how much you hate where you live and how you probably need to put your Victoria Secret panties on and take off your Hanes!

Gets up with her spouse and makes sure he has a protein shake and two perfectly boiled eggs every morning. Spends the majority of her day keeping the house tidy. Has lunch ready for hubby when he comes home on a break daily, and plans out the weeks dinners in advance. She will not speak to friends on the phone after 5pm (by choice) and her kids are perfect. This wife usually happily attends military events and luncheons that would make many of us have an instant case of narcolepsy at the table. Her house looks like someone pulled it out of Home and Gardens and sat it on a plot of land on a military base.

This is the  Claudia Joy of all spouses minus the higher rank.  She usually has perfectly coifed or layered long beautiful hair. Her hairstyles look like they just stepped off a Pinterest board. When she and her husband take pics together they look like the insert that comes in a frame before you add your own picture. She looks like she shops at J. Crew all the time and wears minimal makeup but still has flawless skin. We often wonder where she gets her clothes from and how much she spends on them LOL!

The Never Forget My Culture Wife

According to The Mrs Tee this is the wife who is very focused on maintaining who they are culturally no matter where the military sends them. They usually cook amazing food and invite you over to try it out. You learn so much from them and usually feel super welcomed into their home and family. They moved to your base a month ago and where know where every German, Asian, etc market is in town. You’ve lived in town for 2 years and just found out where the closest German market is…from them.

This is the wife who can make anything. She is the unofficial on post Pinterest Queen. She usually sells her crafts on FB or ETSY. When the kids have to dress up like a character or bring in a class treat for school you can rest assured that no matter how hard you try her kid will win the title for best hair and makeup and most creative class snack!

This is the one who began the coupon craze on her base. She may even teach classes on couponing and in 2015 still posts FB pictures of of the 20 packs of sanitary napkins and 10 bottles of body wash she got for just $7.73. You wonder how she does it ,because when you do it you still wind up with one bottle of body wash that you only got $.75 off and can’t seem to find the coupons for the sanitary napkins.

Everything, everyone, every piece, and every part of her household is organic. She shops only at Whole Foods and Farmer’s Markets. If she goes to the commissary its only to get organic milk and an occasional need right away item. When you attempt to try your hand at her weekly food menu you spend your entire food budget for the month in one day.

This wife has a PH.D in direct sales and has sold for every company in the direct sales world.  If you want to order something from Scentsy, Pampered Chef, Avon, Mary Kay, Jamberry , Thirty One , BeachBody , Shakeology , Stella & Dot , Arbonne , Amway , doTerra , …. then she is your girl!

Share what other types of military spouses you have encountered?

Krystel is the mom of two and an Army Wife. In addition to Army Wife 101 she is the Co-Founder of SoFluential.com a digital media agency that connects brands with the military market. She has appeared on MSNBC ,FOX LA and formerly was a weekly contributor to HLN's "Raising America". She has written for various outlets including Sheknows and Lifetime and is a big fan of cupcakes and french fries.
June 1, 2015 by Army Wife 101 | 2 Comments