Home » Military Life » Chow Hall » Behind The Menu at Applebee’s…My Trip To The Applebee’s Headquarters Plus Answers To Your Questions
Chow Hall, Companies Who Support the Troops, Featured, Travel 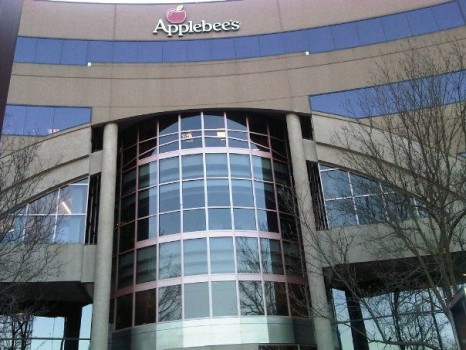 Last week you may have saw me Facebooking, Tweeting and blogging away that I was in Kansas City, Missouri visiting the Applebee’s headquarters. They invited a small group of bloggers to learn about the history of their company , chat with the head executive chefs who help create the menu items and best of all sample some of their yummy dishes which included four of their “Under 550 Dishes” and three of their new “Weight Watchers” dishes which made their debut in Applebee’s restaurants nationwide Feb 20th.

I flew in on Thursday and was so exhausted that I stayed in my room for the rest of the day and night. Luckily the awesome hotel I stayed in had a great restaurant and even better room service. I ordered a yummy seared tuna wrap with fries , one of the best ceasar salads I’ve ever had and a assorted dessert plate. O-M-G it was sooooo good! 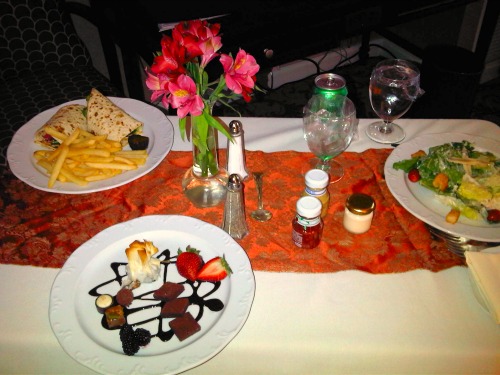 Although I didn’t have the energy to leave my room, I had a spectacular view of “The Plaza” in downtown Kansas City. I hear it’s even more beautiful during the holidays. 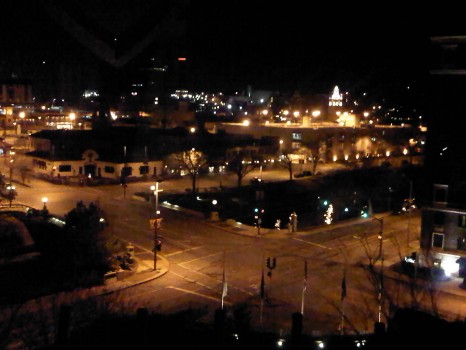 We begin the morning with a awesome breakfast with pastries and bagels and fruits and a variety of beverages. We then headed off for a tour of the headquarters which had me intrigued from the start with their awesome decor. Of course I loved that the military plays a part in the Applebee’s brand and that the free meals they give out EVERY YEAR on Veteran’s Day is one of their most busiest days. It turns out that Applebee’s is owned by DineEquity and *GASP* they also own one of my favorite breakfast spots “IHOP”. 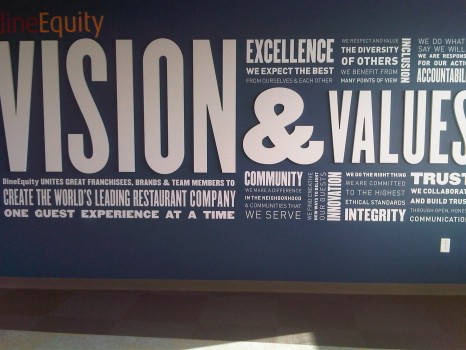 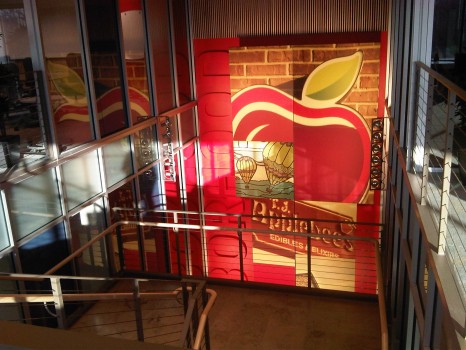 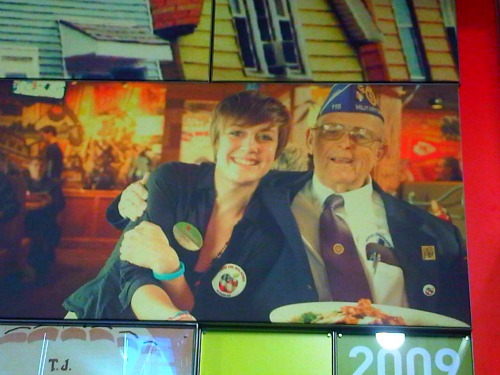 We then headed on over to the focus group room . You’ll never believe how much work goes into something as simple as the right wording to describe an item on a menu. The room reminded me of one of those CSI police rooms in that we can see the focus group but they can’t see you.

It was then time to meet some of the important figures behind all the food you eat at Applebee’s Chef Shannon Johnson (Vice President, Culinary and Menu Strategy) and Executive Chef Jessica James. They spend many hours researching , traveling and finding out the latest food trends to bring back and create a new menu item with a twist. We discussed everything from what goes into the choosing of a dish , the ingredients used, and what went into the creation of the Under 550 dishes. 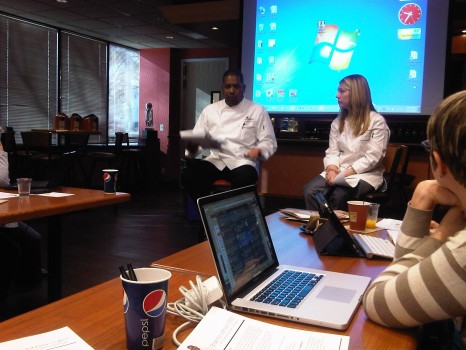 We were having a great time already but then came the really fun part…IT WAS TIME TO EAT! Check out as Chef Shannon Johnson discusses how many of the Applebee’s items are made from scratch:

The first items we tried were the Under 550 dishes. My husband and I had already tried one one of the Under 550 Dishes so I was excited to try the rest. Keep in mind that everything you are about to see is under 550 calories. So basically I can stuff my fat face and not to feel guilty!

The first item was the Sizzling Lime Chili Chicken. I wasn’t excited at first because I think I have discussed with you that I’m going through this I don’t really like chicken anymore phase, not to mention I am not crazy about dishes with lime or lemon in the title. Surprisingly man oh man the lime flavor was just right. It didn’t over power the dish and the chicken was the bomb. It was marinated and seasoned well and it certainly did sizzle all the way from the kitchen door to my table.

I was totally excited when the next dish came out because my blogger neighbor Angela didn’t eat shrimp so( *hides in shame* )I got to eat them ALL!  This dish was called the “Signature Sirloin and Garlic Herb Shrimp”. This includes potatoes as well and I mean you can’t argue with steak (which had a mean awesome tasting sauce) and potatoes. Still not sure how I feel about the almonds on top although they did add a nice crunch. 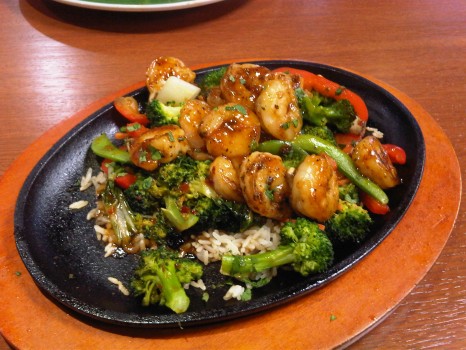 For the shrimp lovers you will love Applebee’s other under 550 dish which was the “Sizzling Asian Shrimp Broccoli”. Another dish that I *ahem* got to eat all the shrimp! This one included steamed veggies and had a great sauce. I enjoyed it alot!

Last up on the Under 550 Menu was the “Roasted Garlic Sirloin” . I reviewed this here with a video…check it out!

We then headed to the Applebee’s test kitchen which to my surprise we were the first bloggers or media to ever enter it. We weren’t allowed cameras or video cameras so no pictures from in there. I will say if I could just have the pantry I would be happy for life. After we took the tour of the kitchen we got the fun part again…EATING!  This time we sampled each of their three new “Weight Watchers” dishes which they cooked right in front of us. I enjoyed the shrimp dish the most. The other two dishes include a steak and chicken dish. All of them tasted devine and you will definitely feel full. For those looking to eat healthy when out dining, you can without the work and stress of deciding what to eat. All the dishes are 12 and under in terms of Weight Watcher Points.

The day ended off with a nice drink and a low calorie one too. We had the chance to try out the Applebee’s Skinnybee Margarita… 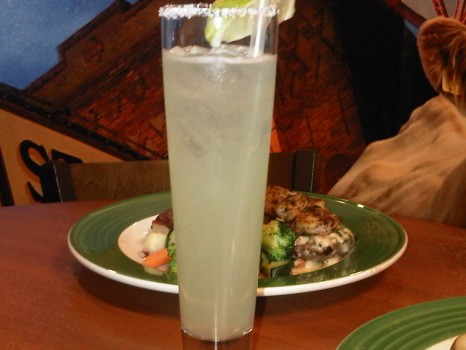 First of all I had no idea a alcoholic beverage had so many calories in it. The Skinnybee Margarita was sooo good. First of all it’s under 110 calories which I’m assuming is great. Secondly you would think anything that’s low calorie means that it has that funky tasting fake sweeteners. This drink does not have that at all and no after taste.  It was really good and super refreshing…ahhhh!

Answers To Your Questions

Some of you asked Applebee’s questions on the AW101 Fan page which I was able to ask a few of them.

Q. Will they be adding more gluten free options?

Q. Why did they stop giving a military discount everyday? I think they only give it on certain days, if at all?

A. The Applebee’s chain as a whole provides free meals to Veteran’s every year.  Individual chain restaurants might offer military discounts but it is not chain wide. Check with your local Applebee’s to find out if one is offered.

A.Vegetarian options are in the works now and the morning of our meeting the chefs were just discussing it.

Q.  Do they have an allergy menu? I can’t have gluten, dairy, soy or eggs?

Applebee’s happily provides an allergen sheet for your convenience. Click here to view.

Q. Will there ever be an Applebee’s for all of us military folks here in Hawaii?

A. Applebee’s has discussed it and it’s just a matter of cost and logistics but rest assured it is something they are thinking about.

I truly enjoyed my trip to the Applebee’s headquarters as I didn’t know so much went into planning their meals. I have a new found respect for the restaurant business in general.

Disclosure: My travel and accommodations were provided by Applebee’s. I was not asked to write this post and all opinions are my own. You can read my disclosure policy here.

Krystel is the mom of two and an Army Wife. In addition to Army Wife 101 she is the Co-Founder of SoFluential.com a digital media agency that connects brands with the military market. She has appeared on MSNBC ,FOX LA and formerly was a weekly contributor to HLN's "Raising America". She has written for various outlets including Sheknows and Lifetime and is a big fan of cupcakes and french fries.
February 23, 2012 by Army Wife 101 | 18 Comments