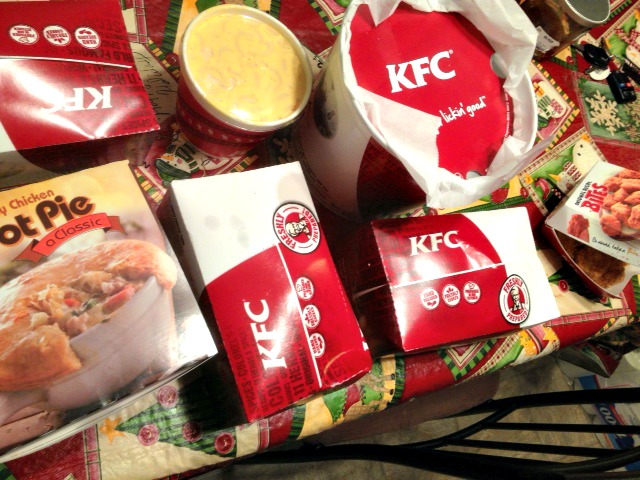 The wannabe foodie in me loves to try new items at eateries. I especially enjoy when a fast food establishment puts out a new item on their menu that resembles something that normally wouldn’t be at a fast food joint.

Case in point recently I had the chance to try Kentucky Fried Chicken’s new Pot Pie that was recently added to the menu. It was a cold Friday night and we didn’t feel like going out anywhere to eat and I certainly wanted something a little heartier then just a burger and fries so I thought this would be a good alternate option. 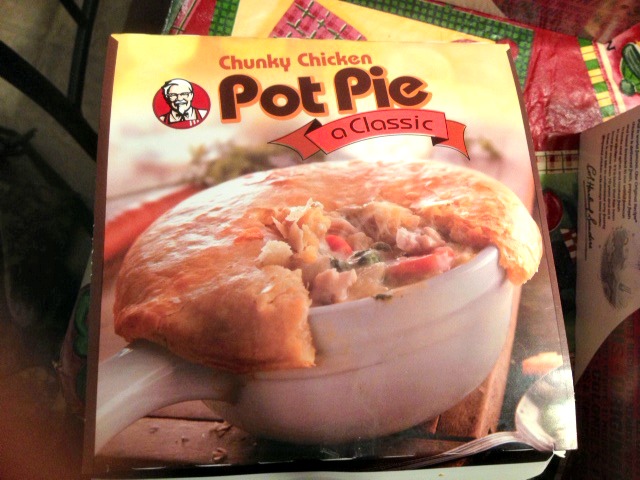 Shockingly enough the first thing my husband and I noticed was the smell of the pot pie. It lit the car up and smelled like something I would make myself.  The smell though wasn’t enough to make the skeptic in me believe that it would be good though.

Soon as we got home we set up our entire meal which consisted of the Bucket and Bites meal which includes eight pieces of chicken, 10 Original Recipe® Bites, two large sides and four biscuits for just $19.99 plus tax (for a limited time) and the Pot Pie.

The size of the pie is enough for two people. In our case it fed 3 because my greedy little son who wouldn’t touch a chicken pot pie before had to have some! We were all in agree-ance that the crust could be sold by itself. It was so good and savory with a tinge of a buttery flavor. 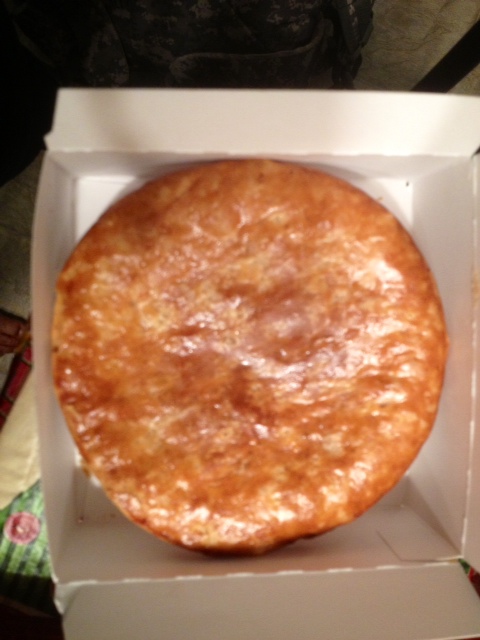 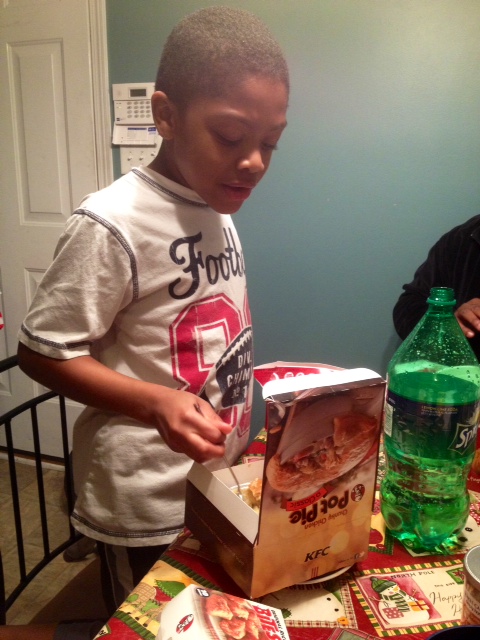 The inside of the pie itself was rich with potatoes, carrots, peas, a creamy gravy and best of all nice shredded pieces of chicken. I personally don’t like huge chunks of meat so the meat was shredded enough to give you a good bite.

The pie itself extends over the aluminum tin and is really flaky just like a pot pie should be. In a nutshell this pie is on par with one that I can make homemade and or $3.99 I think it is definitely worth a try.

To celebrate the award-worthy tastes of Chunky Chicken Pot Pie, KFC has teamed up with Dr Pepper® to provide the ultimate red carpet experience to one lucky winner. The “From Medium to Larger Than Life” grand prize includes a trip for two to Las Vegas, with round trip airfare, deluxe hotel accommodations and transportation, admission to an invitation-only Dr Pepper event with a special performance by country music star Luke Bryan, seats at the Academy of Country Music Awards (ACMA) show and access to the hottest post-show party.

In addition, from February 4 to March 3, country music fans will have a chance to elevate their ACMA experience in the comfort of their own homes with daily chances to win a VIZIO 42” class LED SMART TV with a 40” Premium Sound Bar.

To enter, customers simply need to add a medium-sized Dr Pepper to any order and then text the code located on the cup (or enter on the microsite) for a chance to win. For full sweepstakes rules, visit http://www.frommediumtolargerthanlife.com.

KFC wants you you a chance to try one of your favorite menu items. (2) winners will each win $25 worth of KFC Chicken Checks to use towards a future KFC purchase.

Simply leave a comment below telling me your favorite KFC item.

Giveaway ends March 14, 2013. Winner will be chosen via Random.org Disclosure: I was provided with gift checks to try KFC new Pot Pies as well as to facilitate this giveaway. All opinions are my own and do not reflect the opinion of the above brand.

Krystel is the mom of two and an Army Wife. In addition to Army Wife 101 she is the Co-Founder of SoFluential.com a digital media agency that connects brands with the military market. She has appeared on MSNBC ,FOX LA and formerly was a weekly contributor to HLN's "Raising America". She has written for various outlets including Sheknows and Lifetime and is a big fan of cupcakes and french fries.
March 7, 2013 by Army Wife 101 | 66 Comments