“I do.” For some women, those two words turn us into both a bride and a military spouse. My husband and I took a different path — we were married for three years before he enlisted in the Army.

Once the wheels were set in motion, I was surprised by how quickly our lives changed. 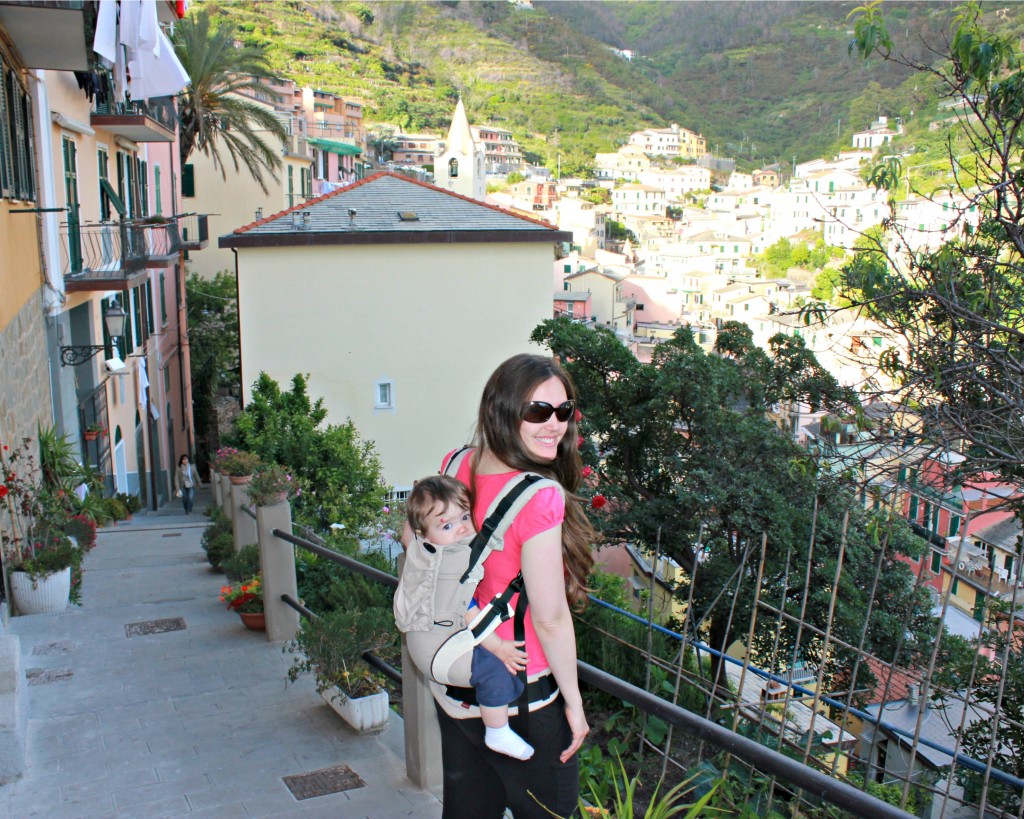 While he was away for BCT, I moved back home with my parents. They helped me raise my one-year-old son, took care of me while pregnant, and helped with my newborn who arrived while my soldier was in AIT.

Once our orders came through and it was time to relocate, I had to say “goodbye” to my family, and “hello” to a new life with my soldier in Germany.

Sometimes I wondered what we were getting into, but then I reminded myself that all military families shared similar experiences. They were stronger because of it and we could be too – we were ready for our wild ride.

How I Found New Roads

Relocating to another country was quite the adventure. We seized the opportunity and learned basic German, met like-minded Americans, and – most importantly – we left base and explored Europe.

Our military family has been to numerous cities in 11 countries. We have photographs, videos and a refrigerator covered in souvenir magnets to remember the special times we have had here.

In addition to journeying with my family, I’ve made very close friends. One day, our roads will fork off in different directions, but we will always have the memories of this shared experience.

As a military spouse stationed overseas, I’ve relied on my strong community. To me, it speaks volumes when civilians also honor our sacrifices, both great and small.

Chevrolet is doing just that. During Military Appreciation Month, they are giving back to all who have served by offering the best Military Program from any car company. All veterans, active duty, reserves and retirees of the U.S. Air Force, Army, Navy, Marines, National Guard and Coast Guard — and their spouses — are eligible for incredible savings.

Furthermore, their #ChevySalutes campaign brings the military experience to the forefront. It highlights how we are constantly finding new roads during and after military service. For example, their touching commercial showcases reunions between service members and their children:

As year-round advocates of America’s heroes, Chevrolet supports the Achilles Freedom Team of Wounded Veterans, works with Cell Phones for Soldiers, currently employs nearly 5,000 veterans and is the Official Vehicle of the Army-Navy Game presented by USAA.

To learn more about how Chevrolet supports our service members, please visit the .

MSB New Media and Chevrolet invite you join in on the fun, share your experience, and get social! 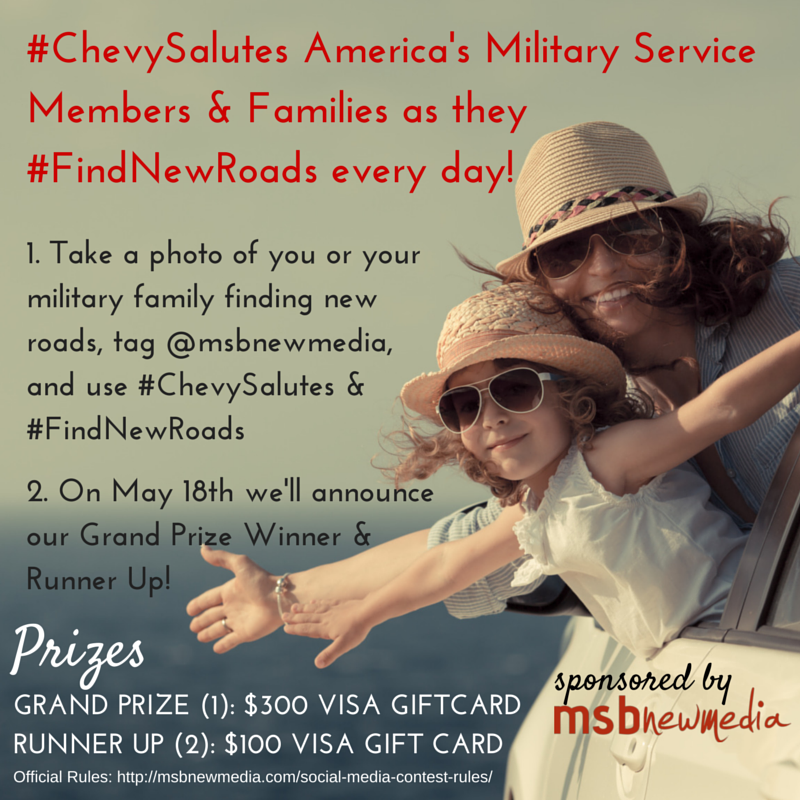 · Share a photo or video of you or your military family finding new roads.

· On May 18th, 2015, three winners will be announced. One lucky grand prizewinner will receive a $300 Visa gift card and two runners up will each win a $100 Visa gift card. 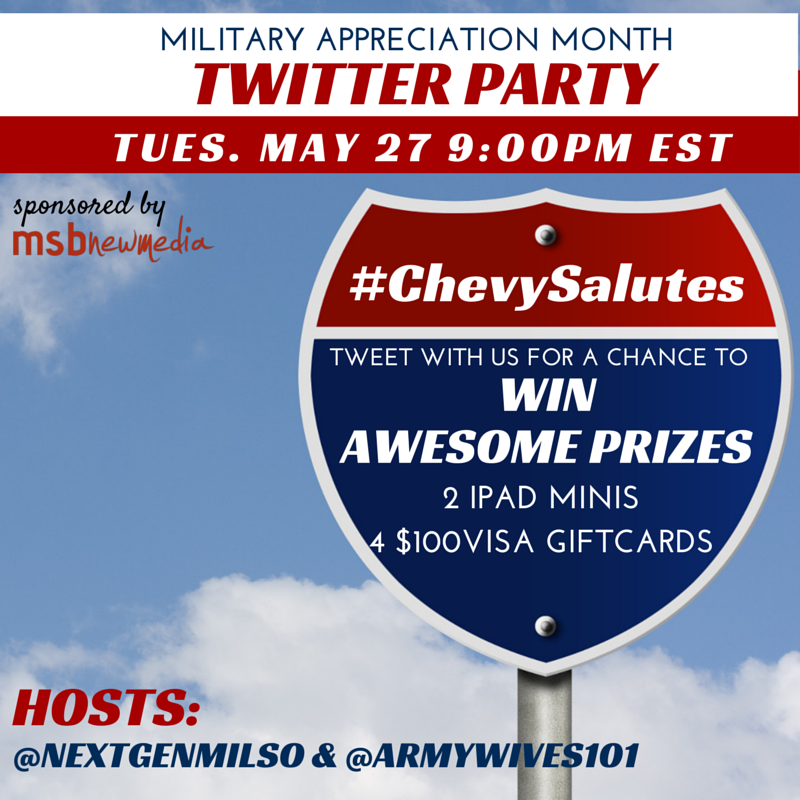 · On May 27, 2015 at 9:00 PM EST, join MSB New Media for the #ChevySalutes Twitter party! We will talk about supporting our military community as they find new roads after military service. Awesome prizes (to be announced), great conversation, and tons of fun promised!

This piece was sponsored by Chevrolet via MSB New Media. The opinions expressed in the article are mine.

A self-described “Jackie of All Trades,” Army wife Jackie Toops chronicles her experiences in Europe through American eyes. Born in Florida and stationed in Germany, the mother of two enjoys writing, travel, art, languages, slow cooking, and peaceful parenting. She studied Interdisciplinary Humanities, Museum Studies and Nonprofit Management, and has overseen public relations for museums, galleries and universities. Currently she is a contributing author for Wall Street International Magazine and a recurring on-air guest with AFN Wiesbaden. She’s usually seen traversing Europe with her Canon, a coffee and two small children. Follow her on Twitter.

Krystel is the mom of two and an Army Wife. In addition to Army Wife 101 she is the Co-Founder of SoFluential.com a digital media agency that connects brands with the military market. She has appeared on MSNBC ,FOX LA and formerly was a weekly contributor to HLN's "Raising America". She has written for various outlets including Sheknows and Lifetime and is a big fan of cupcakes and french fries.
May 12, 2015 by Army Wife 101 | 0 comments