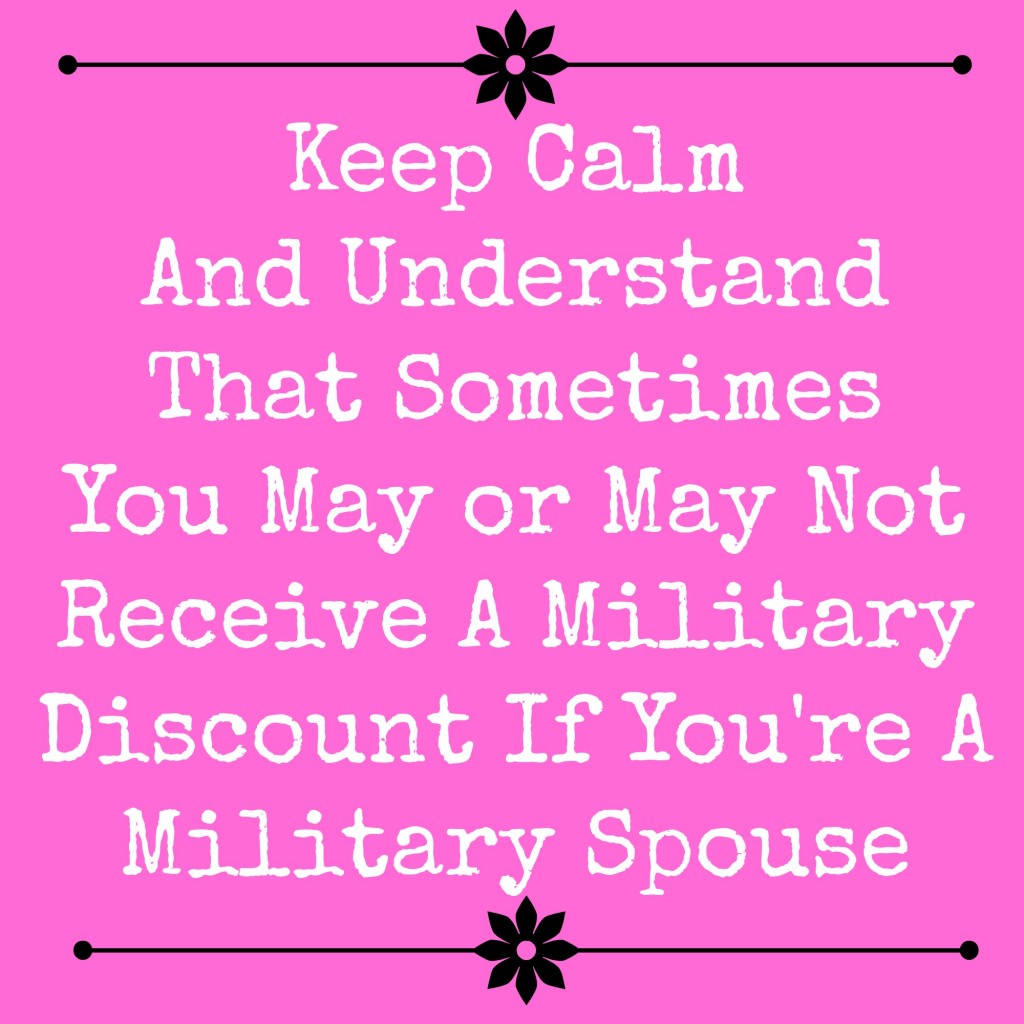 This is one of those military discount stories that I kind of see from both aspects but it’s how this military spouse pushed the issue that kind of rubs me the wrong way.

So before I go into my feelings let me give you the back story “Krystel Style” :

Military spouse says “it wasn’t about the discount but the principle”.

Here is where my problem lies. At the end of the day most businesses are offering the military discount to military personnel. I feel when it comes to the spouse it’s more of a perk and a you may or may not get it situation. I am the queen of utilizing military discounts because the truth is military spouses tend to do more of the household shopping than the actual service member. However, as much as I love a good savings thanks to the service of my husband, I would never push the issue and I surely wouldn’t get the media involved.

Yes military spouses take care of things on the home front and it makes sense to let us utilize discounts that service members may not have a chance to use while away on duty. That being said I got a little sense of that entitlement word that some military spouses like to throw around , and in this case I agree. I can’t even believe I am saying that because as you know I post military discounts all the time. When I post them though, it’s never in a entitlement sense. It’s because I know that us wives tend to relay news of things our service members may not even know are available to them.

The military spouse says it was about the principle, but maybe I am missing the principle? It’s not like all Home Depots have this issue . It seems like this was the case of one silly single store who didn’t have their information right. Is it fair to assume that Home Depot as a whole doesn’t support the military. Are you really going to stop shopping there because they didn’t give you a military discount ?

So now I ask: Was the employee wrong? Possibly! However according to the manager the store’s supposedly well known policy had changed. The employee can only go by what he is told. I really don’t know what to say about the Home Depot Military discount because I have read various stories of confusion over whether or not they offer a military promotion.

Should the employee have mumbled the statement about the military spouse not being the Active Duty Member? No but not because he isn’t right (to a degree) but because he supposed to remain professional and leave his personal opinions at home.

Do you feel this military spouse overreacted?

Krystel is the mom of two and an Army Wife. In addition to Army Wife 101 she is the Co-Founder of SoFluential.com a digital media agency that connects brands with the military market. She has appeared on MSNBC ,FOX LA and formerly was a weekly contributor to HLN's "Raising America". She has written for various outlets including Sheknows and Lifetime and is a big fan of cupcakes and french fries.
May 29, 2014 by Army Wife 101 | 6 Comments