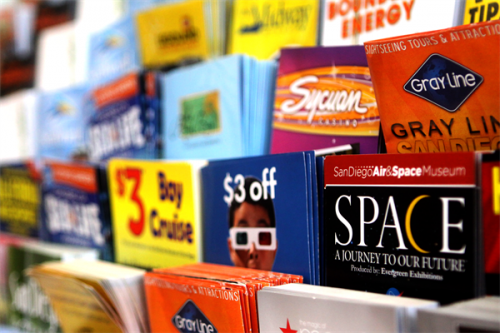 I had always heard of the ITT (Information , Tickets, and Tours) office and when I lived on Schofield Barracks in Hawaii it was right near one of the main shoppettes and the commissary.

I hadn’t used it before, but one day a friend of mine encouraged me to go in there with her and the amount of trip packages and attraction information they had was amazing and overwhelming at the same time.

We sat down with one of the reps who worked there and ended up purchasing tickets to a Whale Watching cruise with our kids. We got the package for close to 30% less than what we would have paid out right. The great part was that we had an ITT rep who we actually were able to sit down with and she explained what they had to offer and everything in full.

This office is the same place where you can purchase the discounted tickets to Disney, Universal, and Disneyland.

You can also go to your ITT office web page via your installations website and download a document which has ticket prices. I have placed the link to find your ITT office (their site) at the bottom of this post.

Most of the time any attractions in your area who want to reach the military and provide a discount will work through your ITT office.

The other great thing is that you can utilize any travel office on any base. So if you are in another state and want to visit an attraction be sure to check out one of the local installations as you may be able to purchase discounted tickets there. It doesn’t matter if you are Army and the base closest to you is Navy, you can still use it as long as you have a government issued ID card.

You should be mindful of the days and times these offices are open. I have found the smaller the base or post the weirder their hours are. I would definitely call first.

If you are overseas ITT offices offer many great day trips and are an easy way to explore the beautiful foreign country you are in without figuring out costs and where to go on your own. You can also get more information on Armed Forces Recreational Resorts which are amazing! I will talk about those in a future post.

One of the other great things I learned from ITT was about the recreational office via MWR (Morale Welfare & Recreation) where at some bases you can rent items such as camping equipment, RV’s and birthday party items for extremely cheap prices.  When we were stationed at Hunter Army Airfield in Savannah, Georgia I rented my son’s bouncy from on post. It was cheap because I wasn’t charged by the hour.

If you are looking to go camping this is a great way to rent tents and all the camping equipment that the average family may not have just sitting around.

In this economy, vacations are pretty much a luxury in that there are more important things to use money towards, but a necessity because everyone needs a getaway to refresh themselves. That being said I thought it was important to share with you some of the available options afforded to us military families.

You can find your local MWR and ITT office via the Army MWR site.

Do you make use of your ITT office?

Krystel is the mom of two and an Army Wife. In addition to Army Wife 101 she is the Co-Founder of SoFluential.com a digital media agency that connects brands with the military market. She has appeared on MSNBC ,FOX LA and formerly was a weekly contributor to HLN's "Raising America". She has written for various outlets including Sheknows and Lifetime and is a big fan of cupcakes and french fries.
April 3, 2013 by Army Wife 101 | 17 Comments