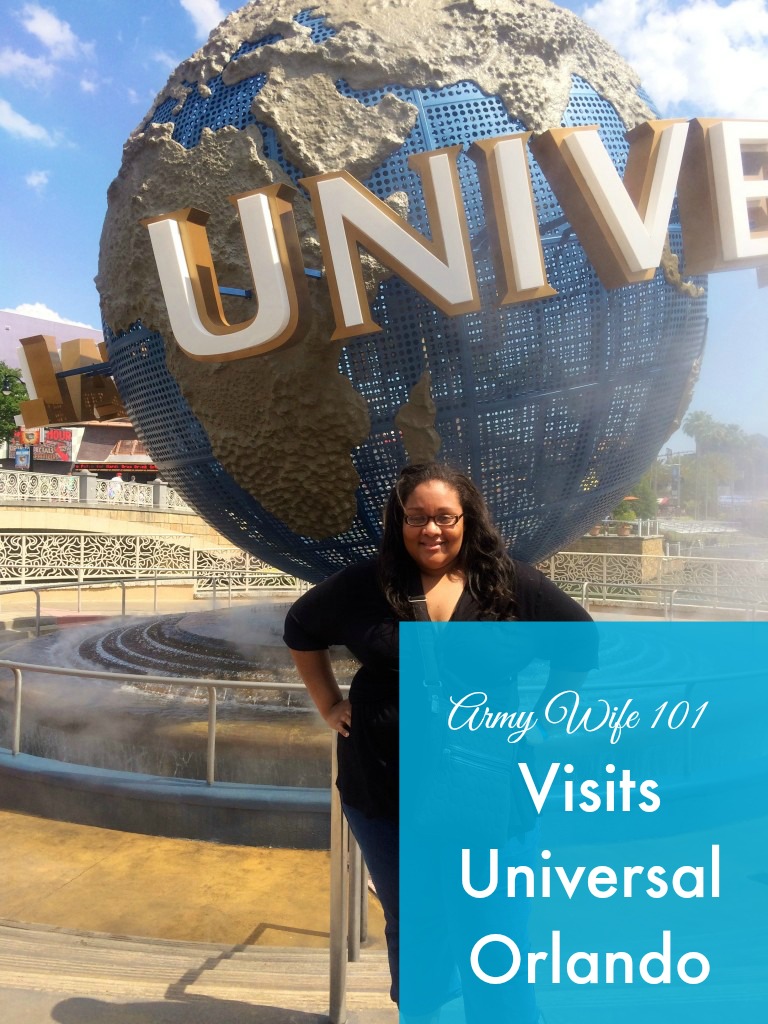 Disclosure: Universal Studios provided my tickets to the park. All opinions and experiences are my own.

Last month thanks to Universal Studios I had the pleasure of visiting their theme park in Orlando , Florida.  I had been to another big theme park located in Orlando and while we loved it , the kids were older now and I felt that Universal fit the bill for them.

We took a free shuttle from our hotel and arrived at Universal around 10am. We went up the escalators and arrived near the safety detectors where they check your bags. Thank goodness none of my family members had a bag of any type and all I had was a small bag in which there was a line specifically for those. It was a short line.  We walked right there and within minutes made our way to the entrance of the park where we acquired our tickets and were ready to start our day. 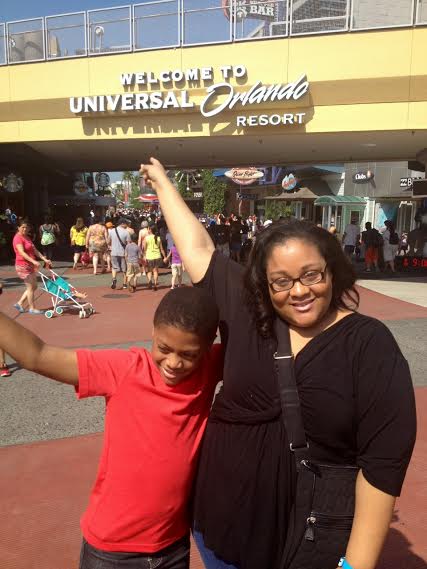 We were so excited walking into the park and even more so because we knew were going to avoid the lines. In addition to our tickets we had the opportunity to utilize the Express Pass. Let me just be honest and say I loved that instead of coming back at a specific time you just went to the “express pass” line and for the most part walked right on. Out of all the rides we went on we may have waited a total of 5 minutes which is nothing in a huge theme park. The Express Pass allowed us to enjoy and focus on the family moments of it all instead of being frustrated because we didn’t get to go on as many rides as we would have liked.

We went on so many rides at both Universal and at their adjoining park “Islands of Adventure” which you can buy passes to as well. 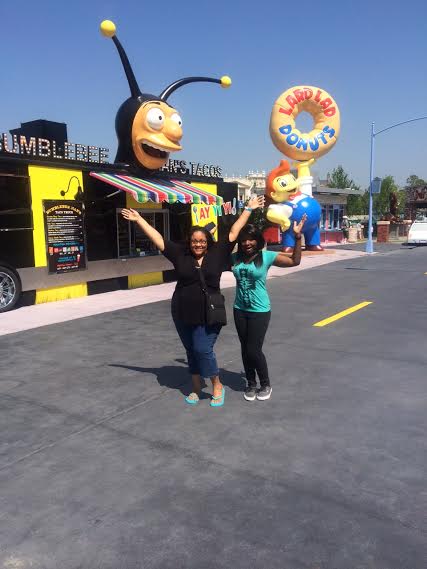 One of the rides we enjoyed the most was the Simpson’s 3D ride. I personally am not a fan of real roller coasters or anything that tosses me upside down. However I love 3D rides that allow you to feel that experience without you really doing it. The Simpsons ride starts out with each family or group assigned to an elevator then a car where the adventure begins. It was extremely fun and we went on 3 times.  We also loved that in addition to the ride there is a replica of feeling like you are in the Simpson’s hometown of Springfield.

There was so much for my entire family to do there. I really liked that there was something befitting for everyone no matter what their preferences were. We do wish we could have done more live shows but because we wanted to make sure we got to experience as many rides as possible we didn’t have quite enough time. We did however get to do a live interactive show called “Disaster” where we were part of a movie that was being made. The best part was the hologram starring a famous Hollywood actresses dad.

While we had fun on everything the best rides were the water rides at “Islands of Adventure” which is conjoined with Universal. You certainly will need to be prepared to get wet. I made the mistake of thinking “oh I will just get splashed a bit” and instead I got drenched. In the event you get wet and aren’t prepped don’t worry to much as they have these great dryers that the whole family can literally fit in at one time and get dried. We really loved the Jurassic Park ride and Popeye’s Barge ride the most. The highlight was getting to see “The Wizarding World of Harry Potter” . 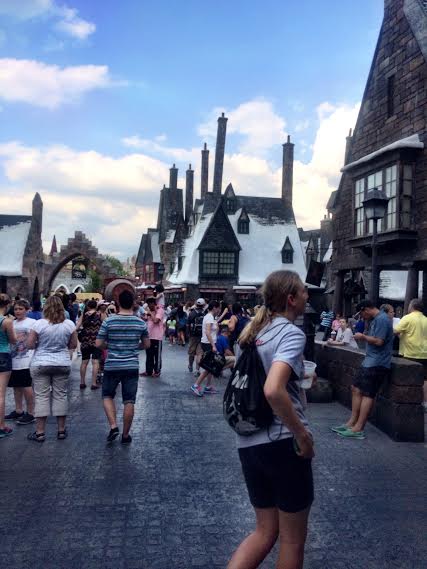 Unfortunately we did not get to do any rides there because we waited pretty late and the Harry Potter rides do not accept Express Pass. The wait wasn’t really long but we were pretty hungry and not even the Harry Potter fans in my family wanted to wait to eat. 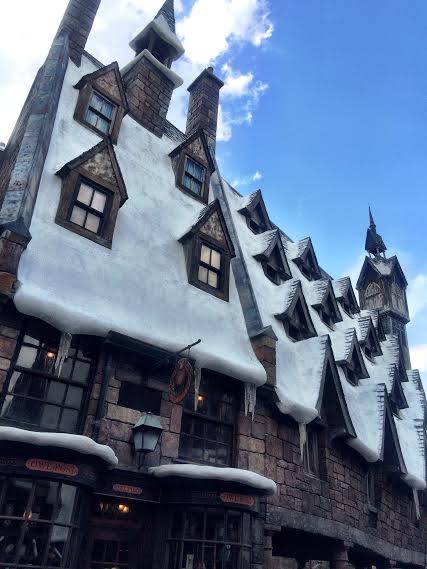 One of the last things I really enjoyed about Universal in addition all the rides and action were the photo opportunities. There were various characters and people dressed up as characters from movies making appearances all through the park. It helped too that the lines weren’t long to take pictures with them because you didn’t have to hunt them down , they were just in random spots as you walked by. The funniest picture below happened because I was walking past the bathrooms when those two dudes in black suits came out the bathroom. I honestly thought they were really like important security people or some kind of investigators and then I felt kind of like a dingbat when I realized they were the “Men In Black”. They were so cool and talking to us just as they would in the movie. My kids loved it. 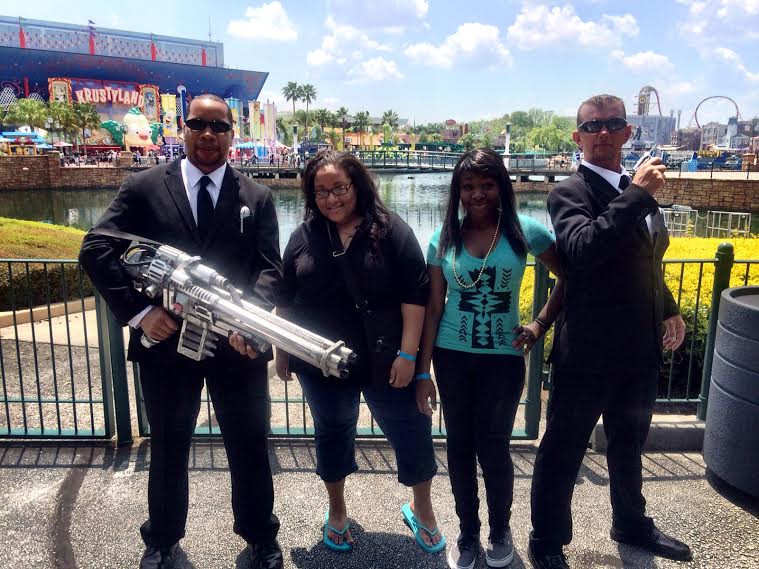 Then I got to take a pic with the one and only “Marilyn Monroe”. 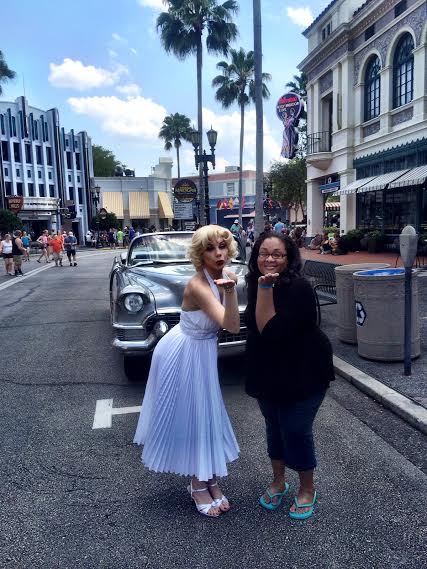 There are plenty of places of places to eat and shop at the park. One of the things that really stood out for me was that Universal Orlando seems to make a big effort to put fresh fruit and healthier items at the stands around the park. Sure they sold sodas and candy and normal theme park foods but I liked that we were able to buy a bag of cold grapes which were really refreshing because it was pretty warm. I was able to keep them in my bag and we all could snack off of them. They also had lots of fresh apples, oranges and fruit cups. I believe that was a big plus. For people who just like to sit and people watch there are plenty of scenic areas to sit and even a phone charging station.

All in all we had a great time and I really want to go back so I can check out more of the shows they offered. We were so busy with rides we only took in one but they have such a selection to choose from. If you ever go just know the Express Pass is definitely your best friend and will make an amazing trip even more worth it.

For military personnel and their families Universal Orlando offers some great promotions for Active Duty and Retired Military Personnel starting at $269 per adult and includes a (1) day park ticket (with 2 days free), accommodations and early park admission. Must use by June 7, 2015.

You can visit http://www.UniversalOrlando.com/Military for more details

Krystel is the mom of two and an Army Wife. In addition to Army Wife 101 she is the Co-Founder of SoFluential.com a digital media agency that connects brands with the military market. She has appeared on MSNBC ,FOX LA and formerly was a weekly contributor to HLN's "Raising America". She has written for various outlets including Sheknows and Lifetime and is a big fan of cupcakes and french fries.
June 3, 2014 by Army Wife 101 | 2 Comments