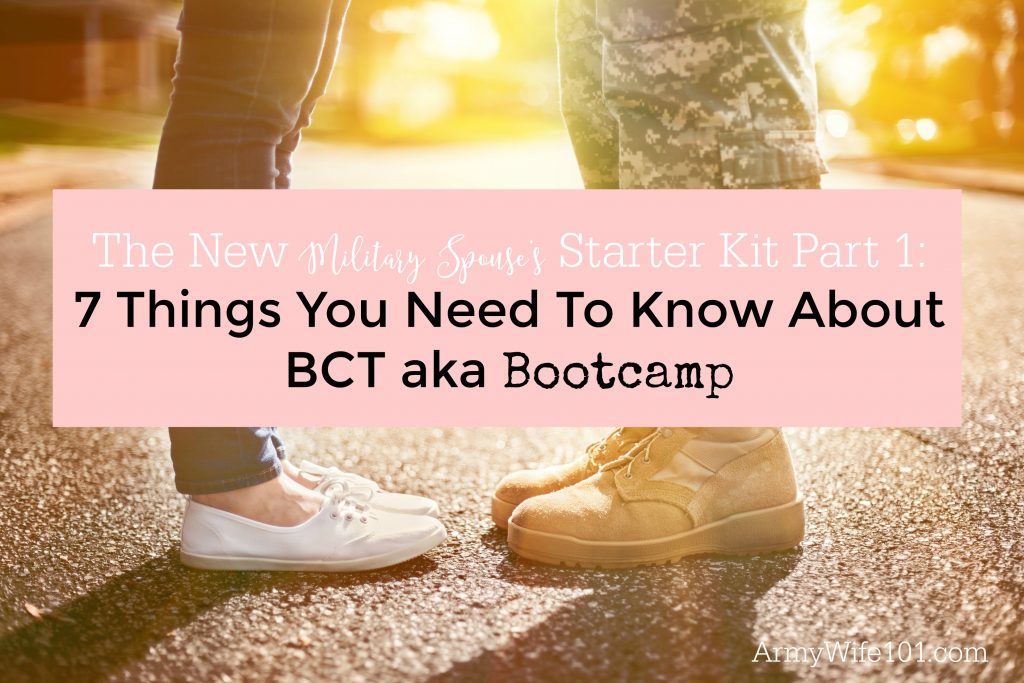 Coming into the military life can be a challenge. Everyone’s situation is different and so the adjustment can be a shock for some. There are spouses who are marrying a current service member, and then there are those who will make the leap together as their partner heads off to basic training thus transforming their entire family dynamic.

Despite the adjustment and how hard it can be for the new spouse, you are not alone. There is a plethora of resources and friendly folks who have been where you are today and are more then willing to help. That’s why we decided to create this handy starter resource series so that you know where to begin, what to expect, and what you will need.

The “New Military Spouse’s Starter Kit” will be a series and broken into several parts for easier reading. Please understand that the military changes regulations and procedures regulary so as of this publication date the below information is current.

Basic Combat Training is where your spouse will go to learn the basics of being a soldier. They will learn the skills to transition them from a civilian to soldier. This includes basic infantry skills, formations, marching, customs and courtesies plus more. BCT lasts 10 weeks for most soldiers and for those going through Infantry or MP training it can be 14 weeks or more. This is known as OSUT in which BCT and AIT will take place at the same time.

Can I Go With Him/Her to Bootcamp?

Unfortunately, you cannot attend bootcamp with your spouse. I have had spouses ask about moving to where their spouse’s bootcamp is located, but that would be pointless because you would not get to see them at all and it would be a waste of time to move for less than 4 months. However, after BCT is AIT (this is where they learn their job). If this is over twenty weeks long you may be able to go live with your spouse at his command’s discretion. We will talk about this in the next part of this series.

When Will They Be Able To Call Me?

While the rules change all the time, you should receive at least (1) call within 72 hours from your SIT letting you know they are there. During this call this may be able to give you an address or you may have to just wait for your letter (details further down). Phone calls are usually before lights out which is 9pm. Additional phone calls are at the discretion of the Drill Sgt, so don’t get down if you don’t hear from them. Use BCT as prep for going through a real deployment. Again this is generally speaking. Be aware that you may not hear from them right away.

Do We Receive Pay and Housing Allowance During Bootcamp?

Yes, your service member will absolutely be paid during bootcamp. They will be paid according to their rank and time in service which for most will be an E-1 or E-2 with less then a year. Of course there are different situations, but this is for the newcomer. You can view the official military pay chart here and clicking on the current year.

Once they arrive part of their in-processing will involve setting up their direct deposit and starting their pay. Be prepared to set money aside to tie you over, because it can be up to a month before you see their first paycheck. The first few checks may vary in size due to somethings coming out. Military pay is split and the paydays fall on the 1st and the 15th of the month, although many banks pay a day earlier if the payday falls on a weekend or a holiday.

Once it is set up you will also receive a monthly housing allowance stipend  (this is included in the check not separate) based on your zip code and his/her rank. You can see how much your monthly housing allowance should be by clicking here. Lastly, if separated longer than 30 days then you can expect to receive separation pay if you are married.

How Will I Get Enrolled In Tricare and Know How To Reach Him/Her?

The first few days of BCT involves in-processing. Again, this is where they will handle pay information, enroll you into DEERS (the computerized database that let’s the military know you and any other dependents are entitled to Tricare healthcare benefits), and any other corresponding paperwork. Within 2-3 weeks of them leaving you should receive a “Commander’s Letter or something similar”. This is the letter with the address and platoon they are in, and if their platoon has a FB page where you can keep up with their progress. Additionally, you should receive a packet with all the Tricare information and information to obtain your military ID card which is your INSURANCE CARD. In the meantime if you need to go to the doctor you should be able to call Tricare (800-444-5445) to make sure you have been registered and from there they can tell you what Tricare plan you are on (Prime or Standard)

What Is The Military ID? Why Is It So Important? How Do I Get It?

As mentioned within a few weeks of your spouse’s entry into BCT you will receive a packet with all benefit information. One of the things included in that packet with be a form called the “1172-2”. Back in the day the sponsor (aka the military member) use to have to be available for you to get an ID card. These days that form basically gives you permission to obtain one without them there. You can use the RAPID’s Locater here to find your nearest ID card issuance office. Be sure to call as some offices won’t accept you without an appointment. You will usually need 2 forms of ID your 1172-2 or a POA.

Your Military ID is important because:

How Will I Know When His/Her Graduation is for BCT?

Again everything seems to be done via letters ( possibly a call). Look for a letter in the mail to give you all the information about the graduation including date and time. The letter will also let you know about “Family Day” which is usually the day before graduation. Be sure to book a room ASAP. Rooms near the base fill up quickly. Remember to look into hotels who offer a military discount since you can use your ID. There are hotels on post, but they usually work on a priority level, and that usually goes to personnel PCS’ing to that military base and visiting personnel.

Krystel is the mom of two and an Army Wife. In addition to Army Wife 101 she is the Co-Founder of SoFluential.com a digital media agency that connects brands with the military market. She has appeared on MSNBC ,FOX LA and formerly was a weekly contributor to HLN's "Raising America". She has written for various outlets including Sheknows and Lifetime and is a big fan of cupcakes and french fries.
October 10, 2016 by Army Wife 101 | 2 Comments

2 Comments on The New Military Spouse’s Starter Kit Part 1: 7 Things You Need To Know About BCT aka Bootcamp