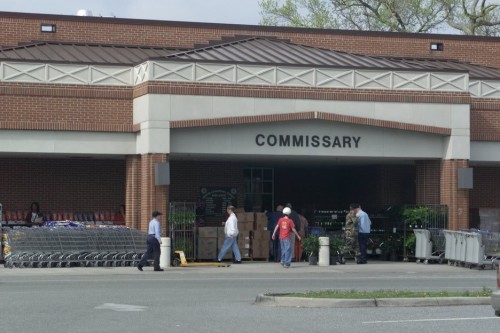 I am as usual scouring Facebook when one of the most awesomest bloggers and army wives hits me up with this article.

His Top reasons why are:

It is unlikely, he claims, that “a grocery benefit is a determining factor in a soldier deciding whether or not to re-enlist.

He cites research that purchases by military retirees – not active members – account for more than half of all Commissary sales.

U.S. commissaries just don’t make sense, Coburn says. “Fort Myer, for example, is located a stone’s throw from the Pentagon in Virginia, and has its own Commissary. But it’s located “less than two miles from at least three major national grocery store chains: Safeway, Costco and Giant.”

His Solution For Us Military Families

Raise military pay by $400 a year and let military get groceries elsewhere!

I sit here with muffled thoughts and my mouth open. The place we know as the commissary has been a staple of military life for years. My mother tells me stories til this day of when my grandfather would take her and her siblings to the commissary in Fort Hamilton, Brooklyn. To even assume that military families can just go and shop on the economy so easily tells me that Mr. Coburn may have researched reasons why CONUS commissaries should be closed down, but obviously hasn’t done his research on how many military families receive food stamp benefits because contrary to popular belief finances are hard for us military folks too.

I live down the street from a Food Lion and while I may stop there for the occasional loaf of bread lunch meat ,or jug of milk, I do not do my household shopping there because the cost is almost double what I would pay at the commissary.

Furthermore so what if retirees make up the majority of the sales, they too earned the commissary benefit and if it were to be shut down , it would not only take it away from current military personnel but those who have earned the right to be called a Veteran and who have served so many years so they could retire and enjoy this benefit they have earned.

Speaking of “enjoying this benefit” let’s be honest while it is awesome to know that their are so many who enlist because they want to serve their country, lest not forget many do enter (in addition) because those privileges such as commissary shopping are beneficial financially in this economy. Healthcare and Commissary benefits are two of the biggest reasons so many do enlist , especially those with families.

You may not also realize that there are many one car military families or spouses whom do not drive and who rely on having a commissary in walking distance or on the installation in which they live. Soldiers also use the commissary for lunch quite often because it is close and affordable. To top it off you use an area near the Pentagon where the cost is high as hell to even shop off post.

Lastly at what point do you take into consideration how many jobs will be loss, many of which are held by military dependents and retirees. These jobs are used to supplement military family incomes. For those who are military spouses working at the commissary how do you suppose they make up for lost income and no commissary benefits?

So I ask Mr. Coburn how do you assume that military families in the states have no use for commissaries? Do you honestly believe giving an extra $33.33 a month ($400 a year) will be enough to take our shopping else where? I find that figure to almost be insulting considering the average family spends close to $300 a month on food.

I realize you are a doctor and according to your bio have never been part of the military lifestyle and to you this might seem like a small morsel. Since you do happen to have an accounting degree I think it would be wise to go back to the drawing board and recalculate your numbers because today your accounting is off!

Do you think it would be beneficial to close down commissaries in the US and would you be willing to go without them?

Krystel is the mom of two and an Army Wife. In addition to Army Wife 101 she is the Co-Founder of SoFluential.com a digital media agency that connects brands with the military market. She has appeared on MSNBC ,FOX LA and formerly was a weekly contributor to HLN's "Raising America". She has written for various outlets including Sheknows and Lifetime and is a big fan of cupcakes and french fries.
December 5, 2012 by Army Wife 101 | 56 Comments