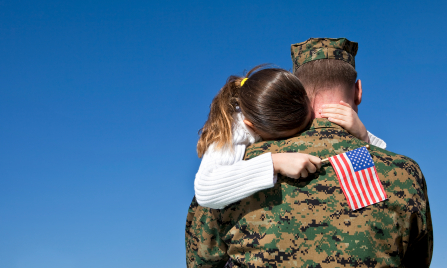 For military spouses, coping with deployment is a different experience for every individual; however, one thing remains constant – spouses will find themselves in an emotional cycle, ranging from pre-deployment to the return of their soldier.

During this time, a spouse is required to learn how to handle a wide variety of circumstances and feelings, and knowing what to expect can help ease the pain of separation and give you the power to pull through to the end of the deployment.

Upon first receiving a warning order for deployment, a spouse may start to feel periods of denial and anticipated loss. These feelings may make you feel alone and can cause physical distance between you and your spouse.

This is a time when you should hold tight to your spouse. You want to strengthen your bond and not let petty arguments get in the way, which is common for couples experiencing an extended separation for the first time.

At this point, your soldier has already received their orders and is thousands of miles away. You may start to feel a fluctuation of emotions, ranging from relief that you no longer have to appear strong in front of your spouse, to feeling overwhelmed and not able complete daily tasks out of frustration.

Many spouses also have elevated feelings of anxiety, numbness, insomnia and sleep deprivation and may feel psychologically alone. Know that you can get through this. Have a support system in place, such as the Family Readiness Group, or find a hobby to keep you busy, and above all, never lose contact with your spouse, which proves to be difficult at times.

When you have something you want to tell your spouse and there’s no way to get in touch, remember snail mail is always a great option. Take out a pen and paper and start writing, not only will this make you feel better, but your soldier will also appreciate hearing from you in different forms.

In addition to letters, your soldier would love receiving a care package from you with a few of his or her favorite items.

For most, things start to improve after the first couple of months. This may not mean you feel back to normal, but you feel that you have hit a point of sustainment. You are now used to your new routine and have built confidence.

Your ability to overcome challenges, cope with crises and make important decisions have given you a stronger sense of control.

In the last month to two months of the deployment, many spouses feel a strong feeling of anticipation for their spouse to return. Some even start planning welcome home celebrations or have started to talk to a military counselor on what they may expect from their soldier when he or she returns.

While some spouses are overjoyed that their husband or wife is coming home, some will feel apprehension and fear of their spouse’s return. These feelings usually stem from fear of losing their new found independence or from decisions they’ve made in the absence of their partner; however, these feelings can go deeper and sometimes stem from forms of depression that may have begun while the spouse was deployed.

Post-Deployment and the Return

The last set of feelings come once your spouse has returned home and reunited with children and loved ones. Characteristically, this can be considered the “honeymoon phase”, as the soldier reunites on a physical level with their spouse.

During this time, open communication is vital. While you and your soldier may have connected on a physical level, there has been much time apart and much has changed, meaning you must reconnect on a psychological level as well.

Let your soldier acclimate to their surroundings and remember to avoid arguing over petty things. You both have been through a lot and need to get back to the relationship you worked so hard for.

Krystel is the mom of two and an Army Wife. In addition to Army Wife 101 she is the Co-Founder of SoFluential.com a digital media agency that connects brands with the military market. She has appeared on MSNBC ,FOX LA and formerly was a weekly contributor to HLN's "Raising America". She has written for various outlets including Sheknows and Lifetime and is a big fan of cupcakes and french fries.
July 2, 2012 by Army Wife 101 | 7 Comments

7 Comments on The Emotional Cycle of Deployments