If you’re looking for something to do this 4th of July, chances are you won’t have to look too far. Many Army bases are hosting their own huge festivities. We compiled some of the biggest festivities at several Army installations. While not every base is holding a 4th of July celebration, we made sure to include some off post celebrations too.

Below are all the celebrations throughout the week of July 4th . 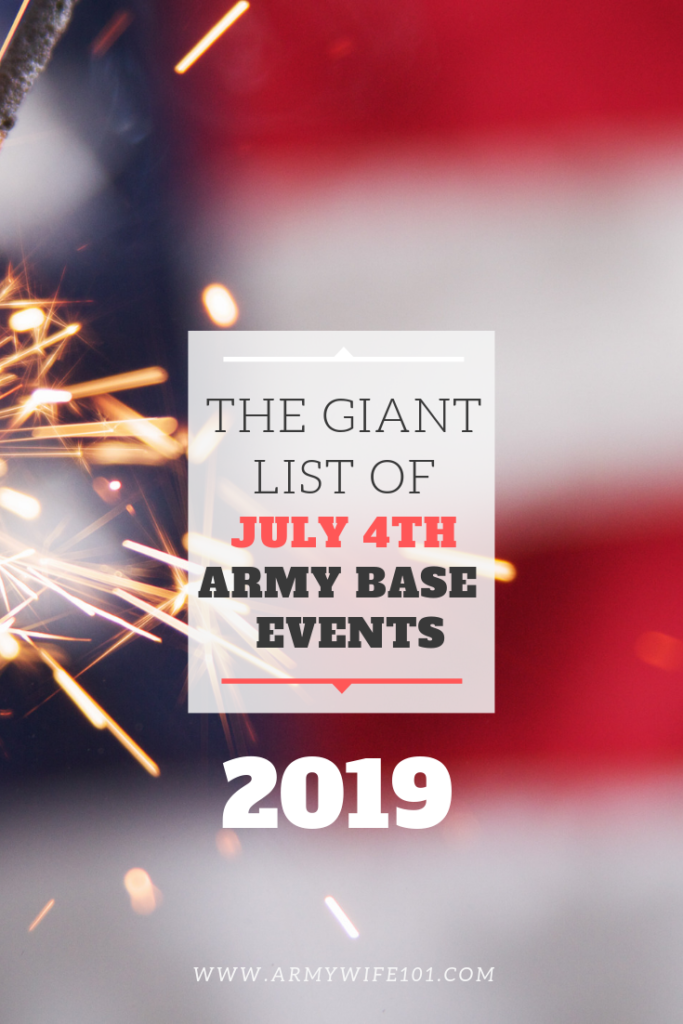 If you’re stationed at Fort Bliss head on over to “Pop Goes The Fort” happening at Biggs Park on Fort Bliss. Activities include a performance from the El Paso Symphony Orchestra and the USO Show Troupe. Food and drinks are available for purchase and you can bring your chairs and blankets too. Learn details here.

The Fayetteville Symphony Orchestra performs a free concert of patriotic and popular works to mark the Fourth of July. Fireworks begin at 9:15, following the concert.  Learn More

Following a 7 p.m. game at J.P. Riddle Stadium, the Fayetteville Swampdogs will launch a Fireworks Extravaganza.  The fireworks show is free, but game admission requires a ticket.  Learn More

At 7 a.m., the Firecracker 4 Miler offers an active way to celebrate the 4th of July. This four  mile course winds through the beautiful and historic parks and sites of downtown Fayetteville. A one-mile course is available. Kids, strollers and dogs are invited. Learn More.

Hope Mills marks the 4th of July with an Independence Day Parade at 10 a.m. and a Party in the Park from 4 p.m. – 10 p.m.  The party includes entertainment, games, food, tournaments, vendors and a fireworks show at dark.  Learn More

Find another small-town celebration of Independence Day at Spring Lake’s 4th of July Festival. The fun starts at 3 p.m.  In past years, festivities have included a Kidz Zone, games, food trucks and vendors, live musical entertainment on stage, and a viewing of Fort Bragg’s fireworks show.  Learn More.

For more information on planning a visit, head to http://www.VisitFayettevilleNC.com.

Although Fort Carson has held their July 4th festivities early, military families can head to Colorado Springs to attend the “Memorial Park Independence Day celebration around 9 p.m. They will be preceded by a performance by the Colorado Springs Philharmonic starting at 7:30 p.m. Activities and concession begin at 5:30 p.m. and will include a performance from the U.S. Air Force Academy’s Wild Blue Country.”

Join the 101st as they celebrate Independence Day from July 4th -6th.  Fort Campbell will host a full week of great food, rides, fireworks and music. Performer will include singer Clayton Quisenberry and “The Downtown Band”. Guests will also enjoy a 22 minute fireworks show on on July 4th. This event is also open to the public. Details here.

If you’re stationed at Fort Drum you can enjoy a live concert tonight from starting at 5pm with the “the Double Barrel Blues Band” At 8pm enjoy popular hits from the popular Broadway play “Hamilton” and other songs from plays like “Les Miserables” “Beauty and The Beast”performed by “Orchestra of Northern New York”. Details here.

Enjoy Military: 2019 Music Under The Stars at Magnolia Park on Fort Eustis this July 4th with the TRADOC band. Other nearby events in the area include include a celebration at the planeterium and the 4th of July Stars in the Sky Festival in Newport News in Victory Landing Park. Details here.

Military members and their families can enjoy an all out celebration at Hood Stadium. Gates open at 4pm. Attendees will enjoy a main stage concert from “The Band Steele and singer Andy Grammer, along with cart races, food, inflatables and a 30 minute fire works show. Admission is free. Details here.

Military families can attend the 52nd Annual Fourth of July Celebration and Fireworks Show at Veterans Memorial Park which includes cannon firing, chili cook offs, music and more. This event starts at 9am and runs until 11pm. Details here.

Fort Lee residents can celebrate at “Fourth on the Fort on July 4th at Williams Stadium. They will enjoy a 50 cannon salute, kids activities, a live band performing top 40 R&B hits and fireworks Events start at 5pm. Details here.

Head on over to “Freedom Fest” for the July 4th festivities taking place at Cowen and Memorial Stadiums with a performance from “Montgomery Gentry”. Other activities include games, a car show, entertainers and more. Details here.

While Polk isn’t having their own 4th of July celebration, they have shared you can head downtown to Washington Ave. to celebrate the 4th with a concert by Gyth Rigdon, Free Burgers, $1 drinks and a fireworks show. Details here.

Starting at 10am Schofield residents can head on over to Weyand Field for a day of red, white and blue activities. Performances include Jordan Davis, Rebel Souljahz plus more. Attractions include kids rides, a bar, the 25th ID band, Iheart radio giveaway and fireworks. Get details and ticket information here.

Krystel is the mom of two and an Army Wife. In addition to Army Wife 101 she is the Co-Founder of SoFluential.com a digital media agency that connects brands with the military market. She has appeared on MSNBC ,FOX LA and formerly was a weekly contributor to HLN's "Raising America". She has written for various outlets including Sheknows and Lifetime and is a big fan of cupcakes and french fries.
July 2, 2019 by Army Wife 101 | 0 comments