I have to admit there are times I’ve listened to some military spouses talk about things they do for their husband’s unit and I sit in awe. Not in amazement like awe, but like ” you really did all that?” type awe. These spouses live and breathe military life and thrive off of being involved. They know stuff that I don’t even think half of the military personnel know. I think it’s awesome that there are people who are so committed and dedicated to the cause. There are also those who just want to be involved to be seen but that’s another story. Then there are people like me who are like “oh, there was a pinning ceremony today?” 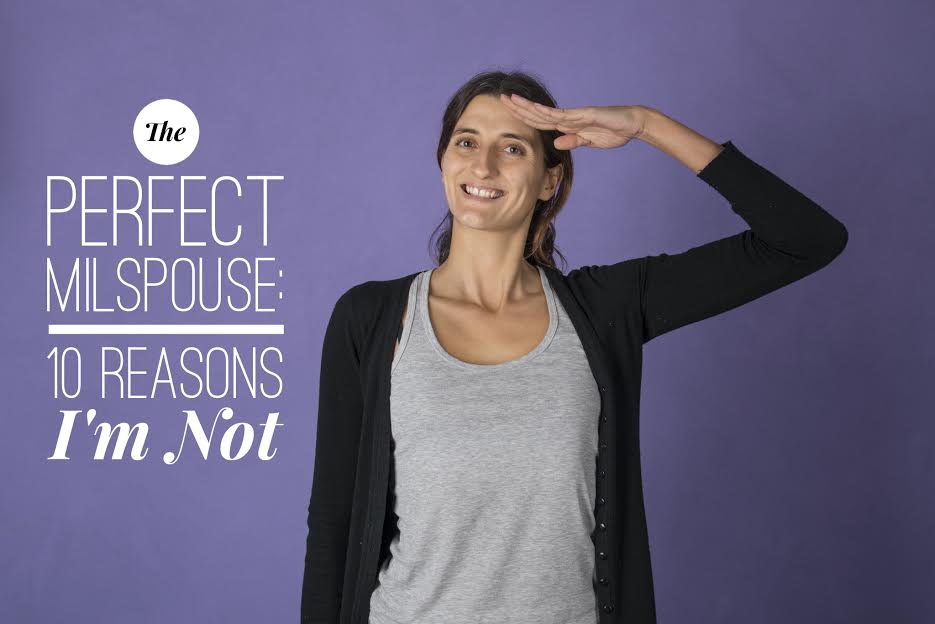 I use to feel like I was letting my spouse down because I wasn’t making Pinterest worthy treats for his unit, but he told me he doesn’t care about all that stuff. “This is a job and while he is honored to serve alongside those he went to combat with, these are still regular everyday folks”, he said. But it wasn’t that statement that made me stop feeling bad. It was when he asked me this question that everything came into perspective: “When I was a Correction Officer did you bake treats for my co-workers”? I said “nope”! “He said “and did you even really know anyone except for the two people I car pooled with?” and again my reply was “nope”! It was at that point that I realized why am I sweating putting on this Susie Homemaker act for the military.

On the whole I love my troops and it’s obvious I support them, and would go to great lengths to defend them and why they are the shiznit. That being said I think we sometimes put too much stock into how much we actually need to do as a military spouse for our service member and their co-workers. Below are ten reasons why I am totally not the perfect military wife.

I’ve always had an issue sitting through the pomp and circumstance of boring ceremonies. I am always happy to watch my spouse and our friends move up the ranks, but I just never had an interest in attending anything like that.

I totally suck at this. They always need someone to volunteer to bring this or that or plan something, but it’s just not my thing.

OMG out of nine years I made chocolate lollipops during the holidays once for his unit.

I can’t tell a Sgt from a First Sgt from a Master Sgt. I usually look at the age of the person and try to guess their rank that way.

I feel awkward calling people by their last name and with a title rank in front of it. I know it’s tradition, but “I’m just saying”!

As you can tell from my Hawaii article I wasn’t happy being far away in the middle of the ocean. Of course I dealt with it but yes, I openly complained… so what! Sometimes you have to complain to get over things.

I still don’t know the rules of hanging it outside. All I know is I thought I was being patriotic and was so proud when I brought my first big flag set from Michael’s.

My welcome home signs absolutely suck. I gave up on them!

That Don’t Mingle With The Ranks “Rule”

My business partner is an officer’s wife …enough said! We are our own people!

His Career Is His

I know some people are extremely involved in their spouses career and stalk advancement list, want to know everyone in the unit, etc. For me, I literally don’t care about all of that. If he was a crossing guard would I need to know everyone he worked with, or a garbage man, or what about a some kind of corporate dude? His career is his and I am happy he has it, but I’m just not interested in the politics of the military.

Want to see what other spouses are saying about this blog post…CLICK HERE.

Krystel is the mom of two and an Army Wife. In addition to Army Wife 101 she is the Co-Founder of SoFluential.com a digital media agency that connects brands with the military market. She has appeared on MSNBC ,FOX LA and formerly was a weekly contributor to HLN's "Raising America". She has written for various outlets including Sheknows and Lifetime and is a big fan of cupcakes and french fries.
September 9, 2015 by Army Wife 101 | 0 comments