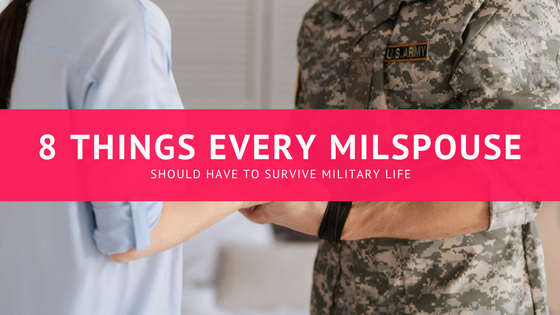 Military life will suck the life right out of a chick…won’t it?

In some cases yes, but if you have the following items it will make life just a tad bit easier.

Below are seven things that every military spouse should have:

I really can’t stand driving ! I hate driving on the highway it makes my soul hurt and my damn foot hurts too. That being said I encourage non driving spouses to get some driving lessons and a license. I really pity those who expect people to drive them around because they won’t learn how to drive. When the guys are away and you live on a base being able to at least get to the commissary and the doctor are essentials. Gas cost and so does people’s time…learn to drive my dears. (For the record I am referring to those who are perfectly capable of driving and just haven’t made the effort , not those who can’t for medical reasons)

2. Ability to Be A Man and Women

This may sound funny but if you are not independent it will make military life hard. When deployments arise count on playing the mommy and daddy. When something breaks count on trying to fix that mess yourself or figuring out the right person to fix it who won’t try to jip you because you are a woman.

Hearing some of the mess that goes on within your spouses unit, or may have even been said to him is enough to make any protective wife wanna bark off at the mouth. However, let your husband handle himself. You’re his wife not his mommy! Not holding your tongue can cause him more trouble and stress at work.

Patience to deal with some of these crazy wives on base who many times have nothing else to do so they choose to make everyone else’s life hell because they’re bored. This won’t always happen but patience is key in military life period. Patience also applies to the hurry and wait rule! Patience in the commissary, patience at the clinic and patience during separations.

This means get you some business so that you don’t have to worry about everyone else’s.  It will help you stay out of the drama of military life in the long run. Seriously consider getting some hobbies if you aren’t going to work to keep you busy.

Plain and simple if you are not independent you won’t last in this lifestyle. My husband had a bad habit of doing everything for me because he is a sweet guy. I loved that he did that until we arrived at our first duty station and he got deployed and I was stuck off post by myself . I barely knew my way around town and had no friends. It took me some time but it was either never get the courage to drive to post and buy groceries or suck it up and use the benefits allotted to me as an independent.

I may take some heat for saying this thanks to the select few spouses who got POA’s then took their spouse’s money and ran. At the end of the day those are those people and you are you. I get letters frequently from spouses who somehow let their husband convince them they didn’t need a POA. Nevertheless, some crap goes wrong and now they are scrambling and mad at a company because the company is requesting a POA to handle something that is only in their husband’s name.  Umm no! When your husband is 10 million miles away get a POA and avoid some unneeded stress.

Lastly, in all seriousness coping skills are extremely important in military life. Unfortunately while your problems are big to you, a lot of people in the Army life have them and their’s are just as dire as yours. I know all too well how hard it can be arriving at a new base and not liking it, not having friends or seeing things happening that you may not like. You are going to need to cope and make the best of it. I am a huge advocate of having “whoa is me” time. I do it often, and in fact I highly encourage an every once in a while pity party. After the party is over it’s time to clean up and get your shiz together. If hubby sees you stressed he will be stressed and won’t be able to focus at work. You will also need to be understanding that the Army quote: ” if they wanted him to have a wife they would have issued him one ” is absolutely true. That B^%$ tends to come first, and most times we’re the mistress in our own marriage!

What other things should a military wife have to survive this lifestyle?

The wives are sounding off about this post on the Army Wife 101 FB fan page.

Check Out What They Are Saying!

Krystel is the mom of two and an Army Wife. In addition to Army Wife 101 she is the Co-Founder of SoFluential.com a digital media agency that connects brands with the military market. She has appeared on MSNBC ,FOX LA and formerly was a weekly contributor to HLN's "Raising America". She has written for various outlets including Sheknows and Lifetime and is a big fan of cupcakes and french fries.
April 16, 2012 by Army Wife 101 | 33 Comments

33 Comments on Top 8 Things Every Army Wife Must Have If You Wanna Survive This Life…MUST READ!