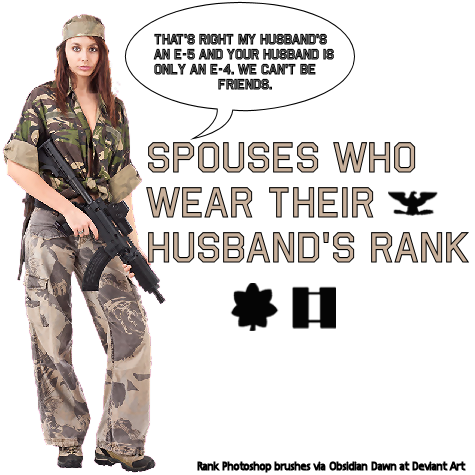 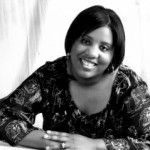 Lateesha is the owner and creator of Thrifty Military Wife where she blogs about all things military, couponing tips, product reviews, and budget saving ideas!

This topic has probably been discussed  quite a bit throughout the military spouse blogosphere. The reason why I’m bringing it up again is because I recently overheard two spouses talking about their situations while standing in line at the Shoppette. I was appalled at what they were saying. I wasn’t trying to eavesdrop on their conversation but these two women were talking so loud that I’m pretty sure the customers at the back of store probably even heard them! I was standing right behind them. Spouse A stated the following, “This woman in my FRG (Family Readiness Group) had the nerve to ask if I wanted to go to lunch with her? I’m friendly with her but I’m not about to be seen with a junior enlisted soldier’s wife.”  I literally felt nauseous. Why in the world would she say something like that? Spouse B just threw her head back and cackled. It was this really irritating and annoying laugh! She then stated, “The nerve of that woman to even ask!” The ladies then proceeded to talk about how fraternizing with junior ranks is not tolerated in their household…..blah….blah.

It is not only the officer’s wives that do this but the enlisted spouse as well. I had a woman tell me at Fort Bliss that she and her husband don’t hang out with any soldiers below an E-5. Her husband had just made E-5 after being an E-4 for six years! He was a freaking chaplain’s assistant for crying out loud. I didn’t appreciate the way they put themselves above others like that. You are nobody lady! I stopped being her friend after she said that. I would never want to associate myself with someone so ignorant. I don’t know the psychology behind why spouses act in this manner and I really don’t care. I just think it’s unfortunate that any spouse feels the need to wear their husband’s rank or look down on other spouses and soldiers! I’m thinking maybe there are some self esteem issues going on. I really don’t know. We are one military protecting this wonderful country of ours. You DID NOT earn your spouse’s rank. He earned it and you definitely do not get up every day to put on the uniform. I have heard of spouses throwing tantrums on post and thinking rules don’t apply to them because of who their husband’s are. Get a grip ladies and stop making a fool out of you and your husband!

Why would you even want to limit yourself to friendships within one group of people? There are wonderful and supportive spouses within all ranks of the service. Please don’t limit the long-lasting friendships that you could establish because of your closed mindedness. And ladies, you wouldn’t get away with acting like this in the civilian world. They don’t care who your husband is or was in the military! You will have someone tell you in a heartbeat to go sit your behind down somewhere! I also wanted to mention that it is never wise to assume anything. Things aren’t always what they seem. I say this because; you will have senior enlisted and officer families struggling with their finances just as much if not more than junior enlisted families. I have seen it with my own eyes. I have written about finances on my blog and when I tell you that I’ve seen senior and officer families struggling; it’s the truth. I was friends with a spouse of a major at Fort Riley and I couldn’t believe their living conditions but yet she was driving a BMW so never assume anything.

Several years ago, I was doing some research on this issue and came across a really funny You Tube video.  This ex-soldier provided an entertaining view of his thoughts on spouses who wear their husband’s rank that I thought I would include below. I thought it was really funny.

Disclaimer: The video does use a few slightly inappropriate words so you might want to watch when no children are around.

Have you ever had to deal with a spouse who pulled rank before or are you an officer’s spouse that had to deal with an enlisted spouse’s attitude for no reason? Please let me know in the comments and as always thanks for reading!

Krystel is the mom of two and an Army Wife. In addition to Army Wife 101 she is the Co-Founder of SoFluential.com a digital media agency that connects brands with the military market. She has appeared on MSNBC ,FOX LA and formerly was a weekly contributor to HLN's "Raising America". She has written for various outlets including Sheknows and Lifetime and is a big fan of cupcakes and french fries.
August 27, 2012 by Army Wife 101 | 92 Comments

92 Comments on When Wives Wear Their Husband’s Rank…Revisited