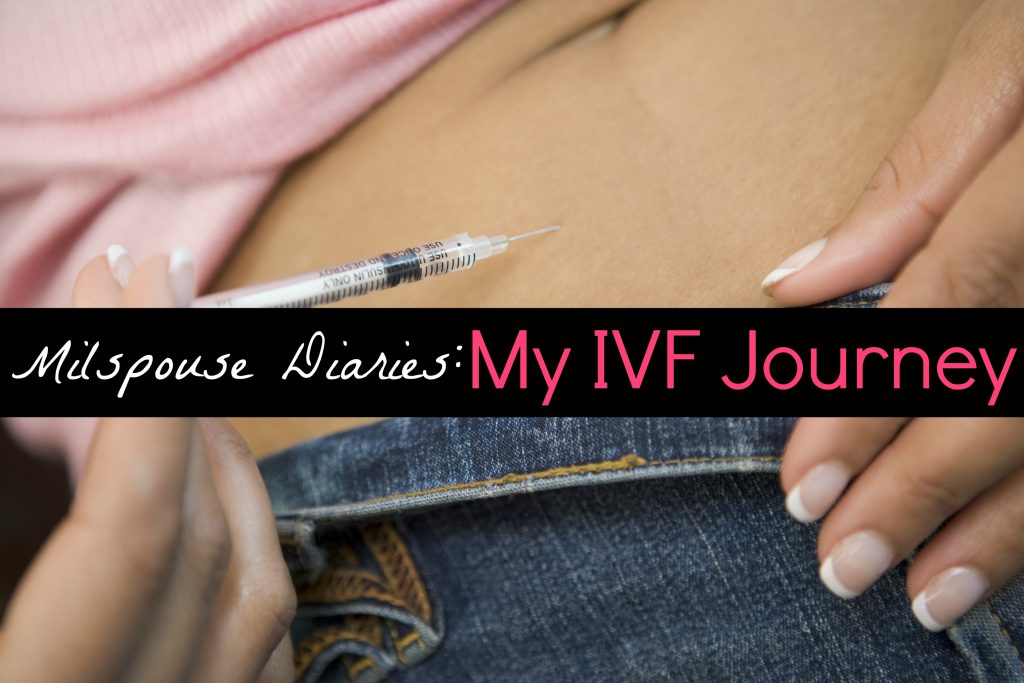 Let me start my story by saying I have attachment issues to things, material things, random things. Just, things. Movie ticket stubs, a Chipotle receipt from a teenage date with my husband that was apparently important, a raggedy pom-pom from a high school football game (one that we probably lost…).

Beneath our downstairs bathroom sink, I kept the sharps container that had all of the injections from our three rounds of IVF. Every week since we’ve had our triplets, my husband has told me “We need to get rid of it Miki. It has to go.” I couldn’t do it.

Because of us PCSing, today’s the day it has to go.  You know the Kim K ugly cry? That was me. And this is why: 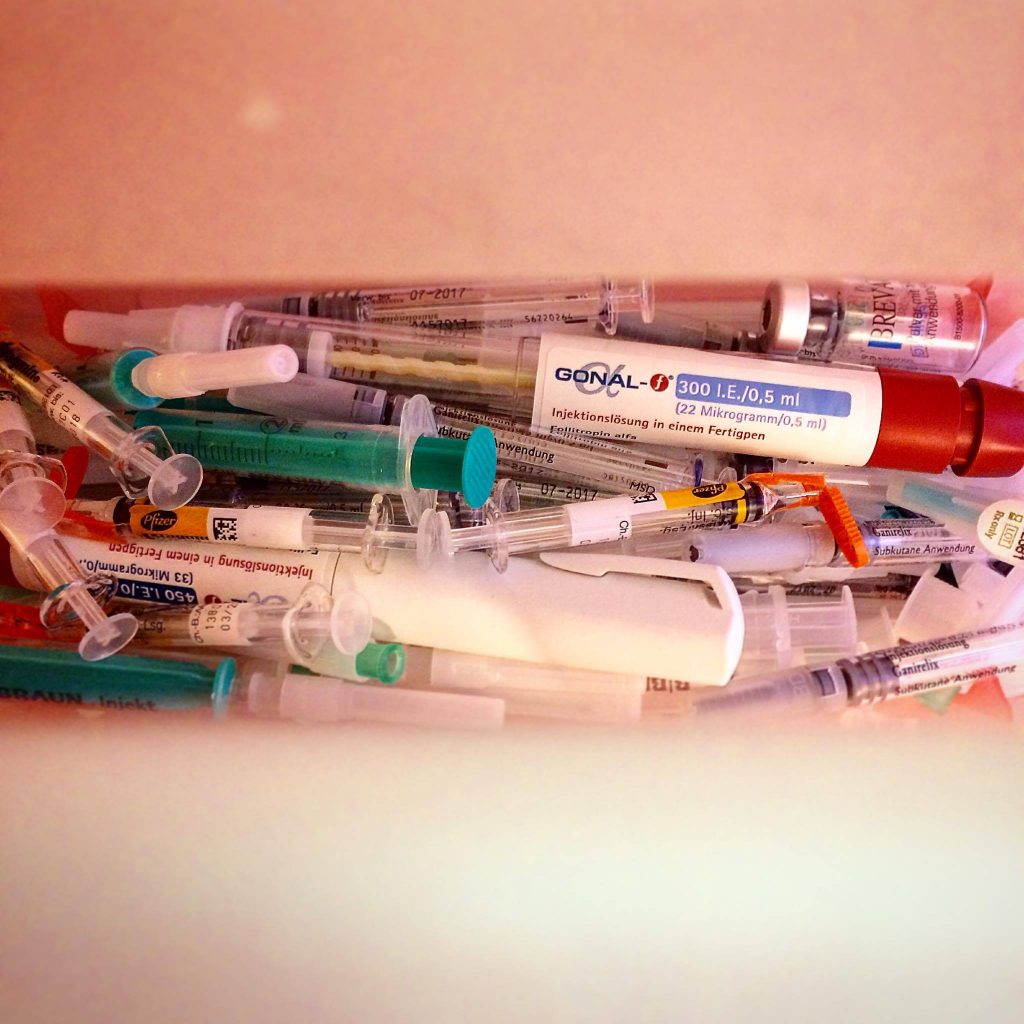 The Beginning Of Our IVF Journey

We started trying for a family in 2009, at the ripe old ages of 19 & 20.  A few months went by & we never thought twice about why we weren’t pregnant yet.  After a year of trying, we thought it was time to see a doctor to see what was going on.  The next three years were ridiculous. We went through deployments, field exercises & an overseas PCS.  Thrown into that mix were a few ultrasounds, blood work & the comforting words from doctors: “We don’t know what’s going, just keep trying, it should happen.” “You’re too young to actually experience infertility, it’ll happen.” & “Yeah, it’ll probably never happen. It could, but maybe you should just adopt instead.”  Come 2014, we’d had it. We wanted a proper & serious diagnosis, and if at all possible we wanted to see if we could have biological children.  By the graces of our fertility doctor (whom I have often referred to as a Wizard), we got our diagnosis: Male Infertility Factor.  You know the episode of Friends “The One With the Fertility Test”? Where Chandler says “Apparently my sperm have low mobility… It means that my guys won’t get off their barcaloungers…”. That’s our life, except there isn’t a live audience laughing.

This clear, red container with bio-hazard stickers all over it held hopes & devastation. Looking through the bottom, I could see the very first injections we ever did. It was November 15th 2014, I stood in the bathroom shaking & crying as my husband prepared the first injection. “I can’t do this, I hate needles. I can’t, it won’t work.” “We won’t know unless we try.” The next three weeks I was doing injections twice daily, we had our first transfer of two embryos & we waited.  December 30th we got the call that we had waited years for “You are pregnant!”. Immediately plans were being made for nurseries, car seats, names, everything. There was no way anything could go wrong, we had struggled enough. At my five week ultrasound we saw an empty gestational sac, we were told it was still too early & to come back in a week.  The next week we sat staring at the screen showing the same sac, no growth, no heartbeat. Nothing.  After a few more days of blood work &  ultrasounds we were told that it was a blighted ovum.  The dark emptiness of that gestational sac was the dark emptiness of our dreams disappearing.  We distanced ourselves from everyone, we quit being social. We hardly spoke to each other. It was isolating, the best way I can describe it is that we were suffocating on that darkness.  On January 23rd I had a D&C, and our first pregnancy was gone.

Somewhere in the middle of this sharps container came our frozen embryo transfer.  It was the middle of March 2015 & we transferred two more embryos.  Again, we got the phone call “Yes, you’re pregnant! But you need to pick up progesterone oil for daily injections. Your levels are low.”. More injections? Got it.  Four days later I started bleeding.  We rushed to the ER, I had an ultrasound & this time we saw the yolk sac.  The doctor told us everything looked perfect & that bleeding can happen in pregnancy, I just needed some bed rest. Three hours later, everything got worse.  For the sake of not being graphic I won’t go into details.  Back to the ER we went, but this time they kept me. I was miscarrying & it was because I had severely low progesterone levels.  April 3rd we lost our second baby.  I kept a journal during this time, but the pages were angry letters to a God I was losing faith in. “What did we do wrong?!” “Why don’t we deserve to be parents?!” “WHY DO YOU HATE US?!”. These types of questions filled the pages, how were we supposed to hold onto faith or hope, how much longer were we to struggle.

At the top of this sharps box I could see the last Gonal-F pen that I used. I remember sitting at the kitchen table last May sobbing because it was 2:30pm & I HAD to give myself the injection, I bled with every prick. I was so tired of bleeding, I was tired of being sore & bloated. I was tired of answering the same old question “When are you having kids?”.   I was scared, almost certain we were going to fail this third time. Convinced we weren’t meant to be parents. All I could do was tell myself “It’s for a baby, we get good eggs & we’ll get a baby.”. I saw the glass bottle of the Brevactid HCG injection we did. I was 100% convinced we failed that trigger shot. Which, in the infertility community is the MOST important shot ever. Because if you don’t do it in the five minute span the doctor tells you, your egg retrieval FAILS, the eggs either mature too quickly & release on their own or they’re not mature enough to fertilize. I spent the next 36 hours a nervous wreck because we hit a vein on my trigger shot & you’re not supposed to draw blood. I even took a pregnancy test to make sure the hormone was in my system. Nothing like seeing a positive test, knowing you’re not pregnant but it gave you the reassurance you *may* have triggered properly. 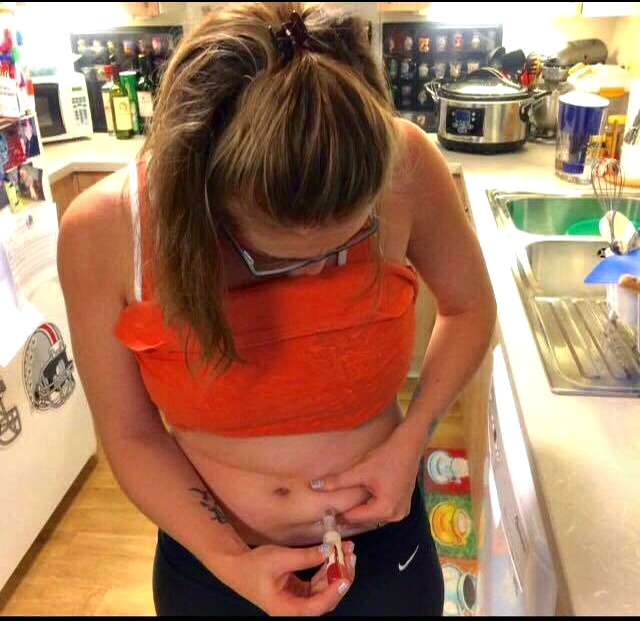 Leading up to transfer day, my husband & I discussed the number of embryos we would transfer.  I told him that I had a gut feeling to transfer three. Third try with three embryos, third time’s the charm right? We knew this was our last chance at doing IVF, before looking into other options.  June 5th 2015 we transferred three embryos. We have pictures of the 7 & 8 celled embryos, we hung them on our fridge. We talked to them, about them, wondered who they were & what they’d look like.  June 19th, we found out that we were pregnant for the third time, but because of how high the hormones were in my body they wanted us to do the progesterone injections again just to be on the safe side.  And on June 23rd we found out that all three embryos stuck, we were having triplets.  The next six months were INSANE. I had several hospital stays because of bleedings due to a subchorionic hematoma, that threatened the viability of one of the babies.  In October I was hospitalized due to an incompetent cervix & needed a cerclage in hopes of bringing my pregnancy to viability. November 19th I was admitted for the last time & was to remain there until the triplets were born.  On January 1st at 1:00am, our triplets came at 32 weeks 4 days. Today, we have healthy, happy 4 month old triplets that we were told on several occasions wouldn’t make it to birth.

Peering into this sharps box for the last time, I saw life. Those hormone injections literally gave us the lives that we were told would never happen.  Our children, that we spent years waiting for came from every single one of those needles.  Every time I had to grit my teeth & stick myself, it was for them.  My husband apologizing as I cried because “that one really hurt!”, brought us these babies.  200+ injections later, it feels like we have come full circle & we can part with the red box that had been a fixture in our lives.

Miki Beery is a military spouse and photographer residing in Germany. Follow her on IG here.

Krystel is the mom of two and an Army Wife. In addition to Army Wife 101 she is the Co-Founder of SoFluential.com a digital media agency that connects brands with the military market. She has appeared on MSNBC ,FOX LA and formerly was a weekly contributor to HLN's "Raising America". She has written for various outlets including Sheknows and Lifetime and is a big fan of cupcakes and french fries.
May 20, 2016 by Army Wife 101 | 0 comments