Home » Featured » 31 Things Life As A Military Spouse Has Caused You To Do
Featured, Onpost Living

The best part of military life is all the things you seem to do at least once in your “milspouse life”. For some reason being left alone alot and moving to different places brings out the photographer, artist , volunteer and Pinterest queen in all of us. The fun side of this life is that there are quirks to it that the majority of us can identify with. 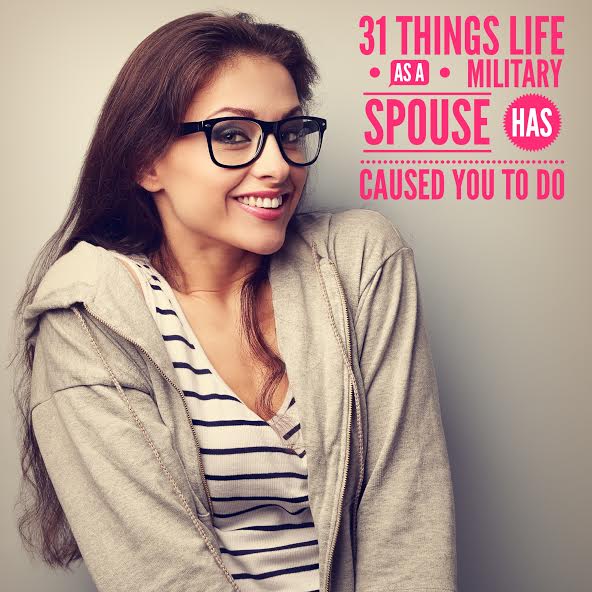 Below are 31 things military life may have caused you to do.

1. You have at one point sold Scentsy , Thirty One, It Works, Jamberry or some other direct sales product.

2. You own or considered purchasing a fancy Nikon or Canon because you seen a bunch of other military spouses own them.

3. You considered starting a photography business because you brought a Nikon or Canon.

4. You watched at least one episode of Army Wives.

5. You binge watch on Netflix as a form of entertainment during deployment and separations.

7. One of those groups is a mil spouse garage sale group.

8. You have at some point drove to the commissary on a day it was closed.

9. You rarely shop at the PX

10. You hate the commissary on payday.

11. You’ve tried to hang a flag in front of your house because you thought it made sense to since you’re a military family, but then you found out you were violating all types of flag rules.

12. You hold your breath every time you gotta clear housing .

13. If you’re an Army Wife you refer to all military personnel as “soldiers” because well it just makes sense.

14. You forgot it was payday at least once…sike we don’t make enough to forget!

16. You use military discount more than your spouse who is the service member.

17. You have planned an entire trip to the commissary based on Pinterest.

18. You tried to join in the mil spouse couponer’s phenomenon and gave up after a week.

21. You say your spouse’s social instead of yours and wind up looking like you’re  committing fraud by switching up to give another SS#.

22. Met at least one crazy mil spouse that you had to ditch.

24. Went on a weight loss journey during deployment.

25. Went on weight loss journey before a deployment and failed because of that damn deployment.

27. Accidentally violated OPSEC not majorly but just enough that if it was a crime you probably would get charged with a misdemeanor.

28. Went to a party because you thought your new friend was having a girls night until you realized you had to spend money and buy something.

30. You’ve tried to do your own boudoir shoot and failed.

31. You subscribe to military blogs like this to read crazy list to keep you entertained, and let you know you are not all alone in this cray cray land of mil spouses.

Krystel is the mom of two and an Army Wife. In addition to Army Wife 101 she is the Co-Founder of SoFluential.com a digital media agency that connects brands with the military market. She has appeared on MSNBC ,FOX LA and formerly was a weekly contributor to HLN's "Raising America". She has written for various outlets including Sheknows and Lifetime and is a big fan of cupcakes and french fries.
June 19, 2015 by Army Wife 101 | 0 comments