Home » Military Life » Care Packages » 6 Out Of The Norm Things Every Military Spouse Should Send Her Husband During A Deployment
Care Packages, Deployment 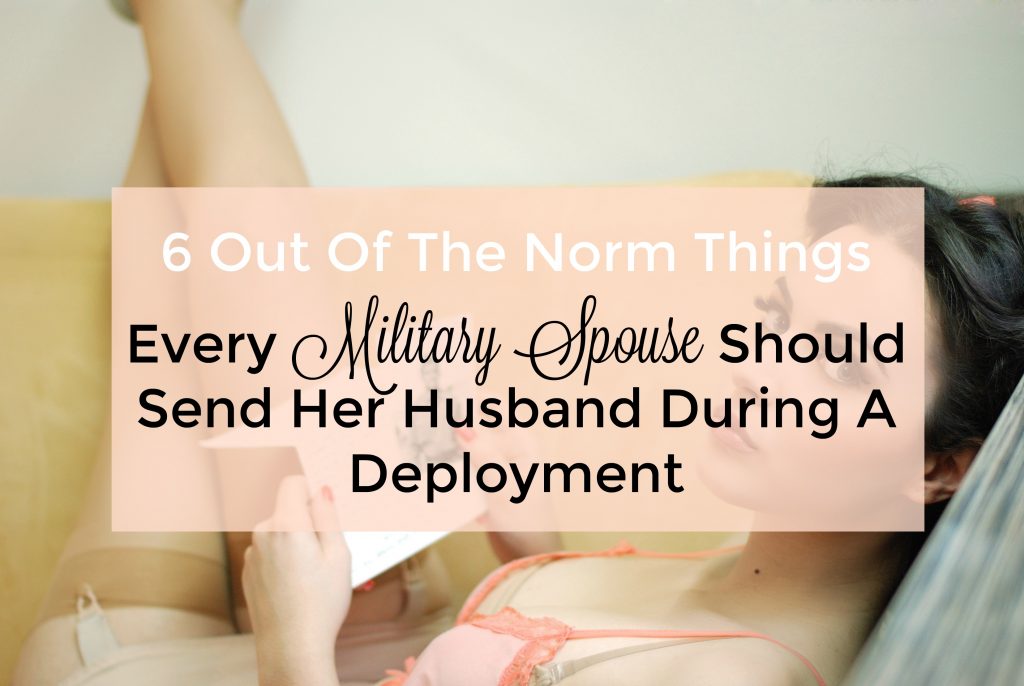 When the guys are deployed we send them a lot of the stuff they need. We send things like jerky , candy, other foods, electronics , hygiene products, dvd’s and their favorite sports magazines.

We do those things because it’s the norm, and it’s one of our duties as the spouse of a deployed service member. Our husbands deploy and we send them all the things they like to keep them comfortable.

But how much are we doing besides “Skype Dates” to give (or send) the men what they WANT?

Now I won’t speak for all of you and say that some of you haven’t done what’s below, but I will bet money that alot of spouses haven’t just because they really may not have thought of it. It could also be they are not as risque, but hey you gotta do what you gotta do to keep the fire alive when your an ocean or two away from your man. Now because this is a PG-13 blog there are some things I won’t mention but I believe you get the picture!

1. Not Just Any Letter

This isn’t rocket science, but the sad simple truth is technology has made some of us lazy and made it way to easy to forget the power of a letter that you can feel and smell in your hand. When I say letter I am not just talking about any letter. Use your inner sexy and romantic thoughts and write your hubby a letter fantasizing what you want your first night together again to be like. Give him something to really think about. Then spray HIS favorite perfume of yours on it!

No don’t hack off a piece of you and send it to him through the mail! However, an item of clothing that you have worn (after a shower of course) with your scent on it. As hard and macho as they are men have a soft side and when they are away from their spouse I believe they become even more in tune with it. They would love to sleep with a piece of you!

Did you know there is a special rule that will allow you to go on a deployment with your hubby? No, I’m kidding! But there is a way your husband can sleep with you in his arms every night and it’s called a “Body Pillow”. This isn’t just any pillow but it’s a pillow with a full-length picture of you on it. You can get one at http://www.CustomBodyPillows.com, and there are also many places online who sell just the customized pillowcases and you can purchase the pillow yourself.

My husband and I are very candid and he would hilariously tell me a lot of the funny things the guys would say they got. One of the happiest moments for soldiers were ahem “Motivational Videos”. Now we are not talking full blown perv fest over here. What I am suggesting is a teaser video that you can email him, just giving him a little ahem…encouragement and mental pleasure.

I am pretty sure whenever you speak to your hubby online or on the phone, you tell him you love him and how much. I also know that sometimes phone time is limited and there are a million other things that you need to discuss. Sometimes Skype goes out and you can’t hear what each other is saying. I suggest a video professing your love and how much your husband means to you. If you are not a camera person or this is out of character for you, then this video will be even more special. This is great for those days when he is really missing you and can’t use the internet. He can download the video and see and hear your voice.

6. A Special Outing on Film

Yup, I switched gears from the romance department but I did this for my hubby and he loved it and I think yours will too. Plan a special outing. It can be anything such as eating out at a restaurant, a day at the beach, or anywhere you will enjoy and film a short video of your time there. This can apply to someone with or without kids. I asked my husband did sending him a video of our day make him sad? He said in a way he wished he could have been there but it also took stress off of his mind by knowing that we were okay and functioning well without him.

What’s something out of the box a military spouse should send her husband at least once during a deployment?

Krystel is the mom of two and an Army Wife. In addition to Army Wife 101 she is the Co-Founder of SoFluential.com a digital media agency that connects brands with the military market. She has appeared on MSNBC ,FOX LA and formerly was a weekly contributor to HLN's "Raising America". She has written for various outlets including Sheknows and Lifetime and is a big fan of cupcakes and french fries.
May 21, 2013 by Army Wife 101 | 22 Comments