When your spouse deploys or TDY’s for an extended period of time, it’s literally like starting another life–at least temporarily.

There’s something about that first day after they leave when you finally sit down that night and it hits you that it’s just you (and kids if you have any).

We recently asked military spouses on our FB page “how they felt that very first day he left and how did they make it through the first night?” 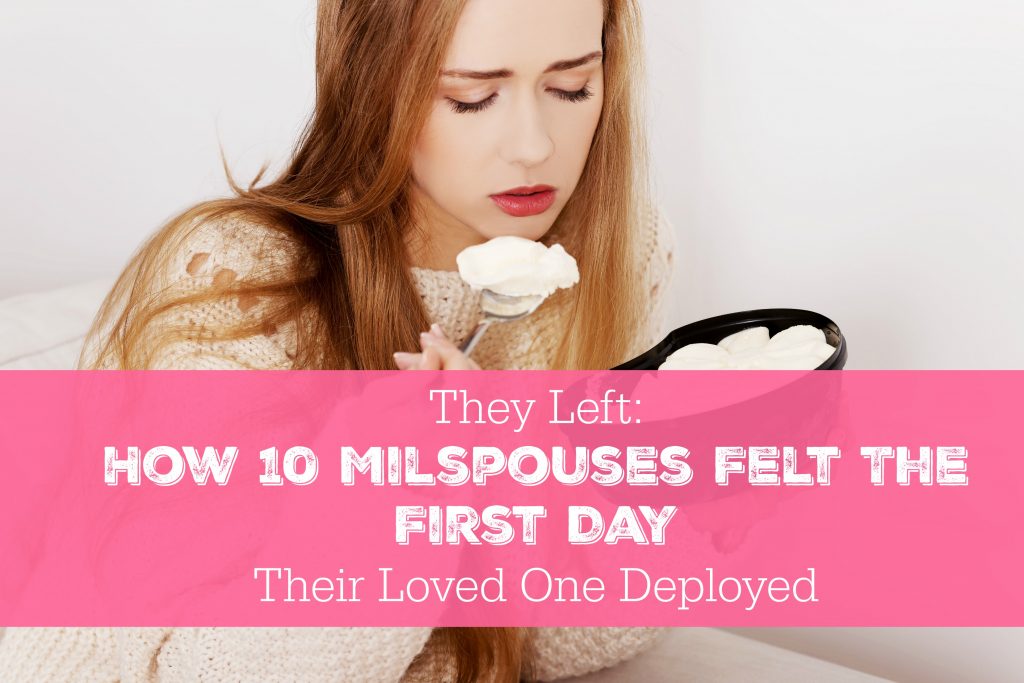 Here’s what some of them shared:

“The first night and day I remember thinking, this isn’t worth it. What did we get ourselves into. He belongs with his kids and family and not missing everything. I wrote a journal the first night. It was quiet in the house of course without him and I just wrote. And wrote. Lol I wrote my feelings, my expectations, and my plans for while he was gone. I promised I would continue to write in it everyday to get through the deployment, but then I realized staying busy was easier. I stopped writing and just slammed my schedule full of business and that helped a ton. Before we knew, he was home, and 2 weeks later I gave birth to our third LOL! “

I was sick to my stomach and kept crying. We were in TX, it was super hot, and the times kept changing so we were hanging out at the motor pool until super late. I was still new at driving a stick and stalled out in my spot and couldn’t drive home, had to have someone drive me home. I then used his pillow and slept on the couch and cried myself to sleep. After 2 weeks of no sleep and feeling like a zombie I started to get into my routine because he made it safe and was in his permanent location. The first 2 weeks were the worst and the last month was the longest.

The first night isn’t the roughest for me. He has been on so many trainings and TDYs that one night is nothing. It’s about two weeks in that it hits me and things get dark. I used to stay up very late watching TV just to keep my mind busy, and exhaust myself so I wouldn’t overthink things as I tried to sleep. Didn’t really work, but I did see a lot of great and not so great TV! Best advice, have a friend that you can call any hour of the night, and make fun plans for the next day if possible. Have breakfast or lunch with friends, or a little retail therapy. After twenty years of marriage, it never gets easier.

“I give myself a week to wallow at night when the kids are asleep and then I pull my girl panties on and move on with my daily life. The first day sucks, but if you have kids you don’t show them you are upset. If you don’t have kids make sure you have a job or school to keep you busy. Don’t let yourself go just because he’s gone. Welcome to the military life they are gone a lot!”

First deployment for him. It didn’t hit me until the 3rd or 4th day in which I totally balled my eyes out. I have learned keeping yourself busy makes it go by so much faster!! Stay away from the news channel. Travel as much as you can! Learn a new language to attempt to speak! LOL! You have good days and bad days. On bad days buy yourself some chocolate and cuddle with your animals!! It doesn’t get any easier and I don’t think any deployment will. I also think that deployments make you really think, just about anything and everything. And lastly it’s ok to cry, never be ashamed to cry!!!

“I clean and remove all things (out of sight) of his including clothes and shoes etc. For some reason, it’s just what I’ve always done! Over 20 years now and I still wonder why his clothes end up in my washing three weeks later.”

Ice cream for dinner, haha. Then I started my first deployment project..writing.

“It’s never a certain amount of time into a deployment. It’s the first time I pick up my phone to randomly call him that gets me.”

Honestly…its horrible!!!! I wasn’t the toughest woman I thought I am because I cried myself to sleep. And, worst, our one year old son was making a scene too. He wouldn’t let go of his dad’s hand. It tore my heart apart and made his dad fall a tear too. Now, we’re back on track…Thank GOD for making me strong from that day on.

Week later it hit. I’m pretty sure I bought the mall and ate myself stupid. Then went home, threw up and found out I was pregnant. Longest deployment is the first deployment.

See what else spouses had to say on this topic here.

Krystel is the mom of two and an Army Wife. In addition to Army Wife 101 she is the Co-Founder of SoFluential.com a digital media agency that connects brands with the military market. She has appeared on MSNBC ,FOX LA and formerly was a weekly contributor to HLN's "Raising America". She has written for various outlets including Sheknows and Lifetime and is a big fan of cupcakes and french fries.
July 18, 2016 by Army Wife 101 | 0 comments