Home » PCS'ing » 7 Ways To Keep the Kiddos Occupied While In Lodging During a PCS Move
PCS'ing, PCS'ing to Hawaii 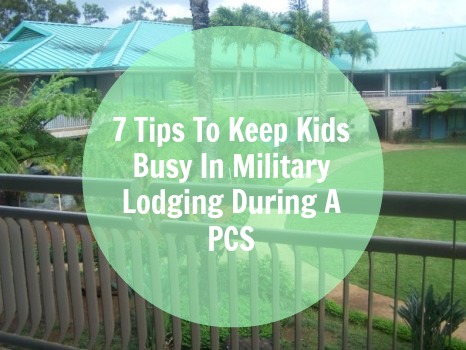 We all know that with PCS’ing comes the obstacle of living in lodging if you are waiting on housing to come available. Yesterday on the Army Wife 101 Fan Page , I asked the spouses “What are some ways to keep the kids occupied during a PCS Move”? I got so many great answers that I thought I would try to compile a list for those of you seeking ideas.

1. Exploring The Base on Foot

Many times we arrive at our new destination only to have one car and in most cases your spouse is using it to inprocess or go to work, while your stuck at lodging all day. Many spouses suggested getting out and exploring the post. In addition getting some air usually helps the kids to take a nice nap.

2. Seek Out Things To Do Close By Lodging

In many cases you will be able to find a playground close by. Make a habit of taking the kids to the playground daily to get them out of the hotel room. When we came here to Schofield, their was a pool by our hotel. I know many families who have made use of that amenity .

3. Story Time At The Library

Alot of  onpost libraries offer story time and it is usually mid mornings. This is a great activity to take the smaller kids too. In addition other moms are there for you to meet.

Some Army posts have movie theatrers and many of them, offer kids movies for free or extremely cheap on certain days. Simply grab a movie schedule at your local AAFES food court or visit the schedule.

This is a given but in case your questioning it, most spouses suggested bring some of your child’s favorite toys. One wife suggested picking a few and packing them in ziplock bags. During our last PCS move I let my son bring legos and his handheld game system and it kept him pretty happy. I also purchased a few new things on some of those visits to the PX we did so frequently while in lodging. Another idea is to let the little one fill up a backpack with toys of their choice, this way they feel as if they were able to make a decision on their own. Bring lots of books, coloring books and crayons. If you are worried about your little one writing on the walls, the Invisible Ink Crayola markers that only write on the special paper work wonders. Should they write on the wall it will be clear.

Lastly purchase a toy or two and save it for a moment when your little one is restless, acting out or just having a bad day. This trick also works well on the plane.

6. Getting Children Involved in Activities Beforehand

One suggestion was to not let living in lodging deter you from enrolling the kids in activities before you move into housing. Check out the Skies office, CYS and ACS. Activities through these resources are sometimes free or discounted. My daughter participated in dancing through Skies and my son was in Karate. I paid alittle over $40 a month for each of them.

Lastly portable DVD players work wonders. You can get them fairly reasonably for under $70 bucks and purchase used movies off of ebay and amazon. Once you arrive at lodging many of them will have video rental machines where for a $1 a day you can purchase movies. The kids are sure to love this. Don’t forget to purchase the ear phones for some more added quietness.

If you ideas please feel free to share them in the comments section below!

Krystel is the mom of two and an Army Wife. In addition to Army Wife 101 she is the Co-Founder of SoFluential.com a digital media agency that connects brands with the military market. She has appeared on MSNBC ,FOX LA and formerly was a weekly contributor to HLN's "Raising America". She has written for various outlets including Sheknows and Lifetime and is a big fan of cupcakes and french fries.
February 16, 2011 by Army Wife 101 | 1 Comment