I’ve had the pleasure of living on and off post and can say I have enjoyed both for different reasons. Last week I shared the “Top 10 Reasons To Live On Post” and today thanks to my lovely ladies on the AW101 FB Fan page I am sharing the Top 8 Reasons Some People Won’t Live On-Post. 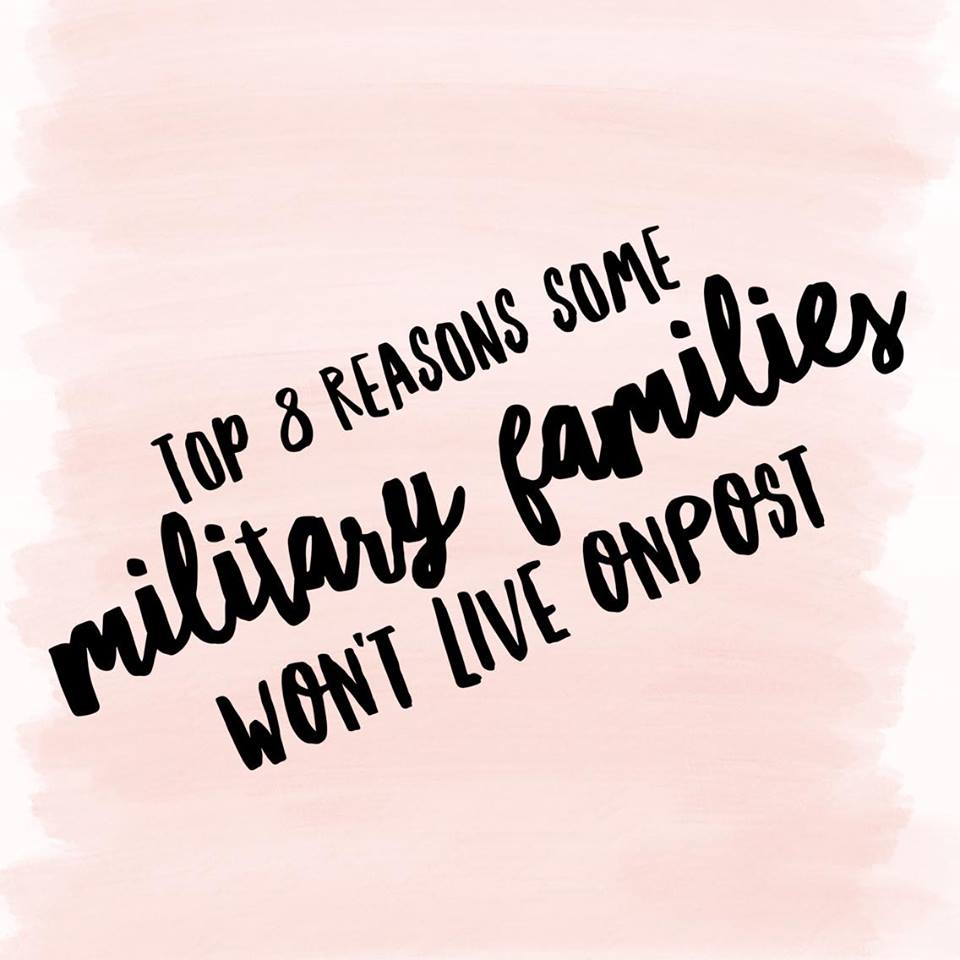 I actually loved living on-post at Hunter Army Airfield and Schofield Barracks. I was one of the ones who always lucked up and got new housing, and let’s be honest the housing you get determines a lot. At least for me it did!

I do have to admit that when I got to Bragg we chose to live off post for various reasons. I must say I enjoy not having the Army thrown in my face on a hourly basis. It feels great to not feel like all eyes are on you, and while I used to roll my eyes at the girls on forums who would say their husbands wanted to be free-I think I understand now. Some people will say you save on BAH, but do you really? If you get a 2 bedroom home and the next person with the same amount of children (same ages) gets the new three bedroom home for the same BAH… is it saving?

Electricity wise you are saving to a degree, but many installations are now charging for lights and with budget cuts and the private companies that run housing-costs will go up. If you don’t believe people are paying for lights on post click here.

Then again my opinion has changed a lot in a year because on post used to be the ONLY way to go for me.

Here are 10 reasons as suggested by readers why they don’t like living or won’t live on post:

Many people aren’t fans of the restrictions of the type of dog you can have on post. For a list of pets welcomed on military installations click here.

2. The Illusion of Safety

I admit I was one of the ones who loved the fact that I was surrounded by gates and guards. In fact, me and one of my best friends used to make a joke that “on post” was our estate and it was armed and guarded by the government. The truth is while I did tend to feel more comfortable on post, there were just as many break ins, physical attacks , unruly people, and other crazy incidents that happened on post. In all fairness compared to a town a base is smaller and word tends to pass along faster so it may be why more people hear about things that happen. That being said you should be just as cautious on post as you would be off. Just ask the folks about some of the stuff that goes on at Fort Bragg? Wonder why I chose to live off post lol?

Quite honestly I didn’t mind this until one day I had to go to the bathroom REALLY REALLY bad and of all days they decided to do a car inspection. I could see my house from the gate, yet here I was two seconds from sh$%# on myself outside the gates at Hunter Army Airfield . I know TMI! The other issue with gates is that there are times a base can go on lock down and you may not be able to get on or off. This could be an issue if you have kids.

4. Living Knee Deep in the Hooah

Karen F. stated this perfectly. “I am patriotic and all that but sometimes the sea of green, the constant salutes or your soldier feeling like they are being watched at all times can be a bit much”.

Many wives mentioned this and I am a witness to hearing “midnight or lunchtime ahem sessions” and being awoken or having to listen to someone else get “some” while my husband was deployed. Just Sayin! One reader said “she sneezed and the neighbor next door said “bless you” through the wall”.

6. Parents Who Let The Kiddies Roam and Not Respect Others Property

This can happen anywhere, but I have found on post many parents have what I call the “Oh it’s ok because we live on post syndrome. This meaning they let their kids run free, touch your property, and when confronted act as if you are not the normal one.

Nosey neighbors exist everywhere. I have found it (once again) to be more prevalent on post though. The truth is due to our lifestyle a lot of spouses are stay at home moms and nothing is wrong with that. The problem is many of them don’t have anything else to do. So what does one do when they are bored? They look for other people’s business to mind and with that comes, misinformation and sometimes drama. When I lived on post I always felt like I had to make friends or at least speak to my neighbors or else I would be looked at as weird. Where I am at now off post, my neighbors wave and we keep it moving. It’s quiet and no one minds anyone’s business and if they do they don’t make it known.

8. The Noise of Soldiers Training

Quite honestly I experience this even now off post, but it was worse at Schofield living down the road from the range. I don’t know exactly what they were blowing up, but I used to always say I feel bad for whoever has little babies. A few weeks ago right here near Bragg the cannon (or whatever it’s called) was so loud I thought my window was going to blow inward and explode. If you have little babies this can be a serious pain.

Do you have a reason that you wouldn’t live on post…share?

Krystel is the mom of two and an Army Wife. In addition to Army Wife 101 she is the Co-Founder of SoFluential.com a digital media agency that connects brands with the military market. She has appeared on MSNBC ,FOX LA and formerly was a weekly contributor to HLN's "Raising America". She has written for various outlets including Sheknows and Lifetime and is a big fan of cupcakes and french fries.
May 1, 2012 by Army Wife 101 | 65 Comments