My husband has had his current vehicle for 13 years, an old Chevy Blazer that has been to Germany, Hawaii and all over the mainland.  He drives it as a badge of honor since he has kept it running this long and our children prefer to ride in that old thing over my Jeep.  With the holidays and craziness going on, my DH forgot that his tags expired in December.  He took it to get inspected a few weeks ago and it failed inspection due to a faulty parking break.  Well, $500 later he goes to pick it up yesterday morning and gets in reinspected.  It passed and he planned to go get the new tags first thing the next morning because he needed to get back to the office.  This would all be boring and so not worthy of a blog, except for a young MP that happened to be behind DH on his way home from work. 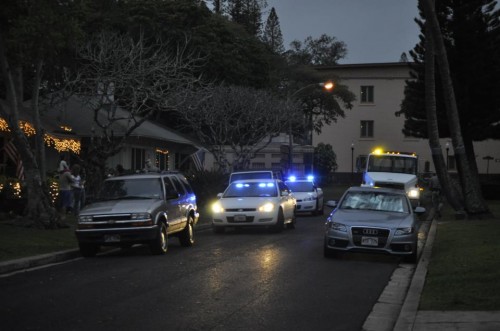 We live on post at Schofield Barracks in a small neighborhood where everyone knows everyone.  Most afternoons the neighborhood kids are all playing outside and various parents hang around chit chatting while keeping an eye on the kids.  Imagine our surprise when my DH turns down the road followed by an MP with blue lights flashing!  They pulled up in front of our home and there was no surprise that he was pulled over for expired tags.  The shock was that his truck had to be towed off post until it was registered because it is deemed unsafe. Let me also tell you that we ended up with 2 MP cars with flashing lights before this was over.  To add insult to injury we have to wait for an hour because the tow truck company that has the Army contract is on the other side of the island!  And guess what?  We had to pay $100 cash to tow it off post.

Basically, the MP said this was SOP and there was nothing he could do because he already had started the process.  He honestly felt bad about it when my husband showed the receipt from just that morning and the inspection.  So here we stood in front of my home with about 10 little kids under 5 and about 10 of my neighbors.  People who had just left work were stopping to see what was going on.  Everyone was in agreement that yes my DH was at fault for being lazy and not getting his tags done sooner rather than later, but towing the car is a bit extreme.

The MP that pulled him over took me aside to apologize over and over that this was happening.  I understand he did not write the SOP, so he is not to blame, but I cannot help thinking who would make that procedure?  I try not to discuss rank much on blogs I write, but I have to mention it this time.  My husband is a LTC and yes he brings home a good paycheck after 17 years of service.  Everyone would assume we have money and $100 is not that big of a deal.  You can never judge a book by its cover.  Our oldest son has low functioning autism and most months our therapy and medical bills are more than he brings home in a month.  We were lucky that this month we had that extra $100, but what about the E4 with 3 kids that has this happen?  If you don’t have the cash, then your car gets impounded until you can pay to get it out.

We now have the car registered and we have $100 less in our checking account.  We will not really think about it too much after today.

My real question is why on earth would someone write a procedure like that and who does that benefit?

Certainly not any soldiers or families…just the tow truck company that gets a fat wallet.

Krystel is the mom of two and an Army Wife. In addition to Army Wife 101 she is the Co-Founder of SoFluential.com a digital media agency that connects brands with the military market. She has appeared on MSNBC ,FOX LA and formerly was a weekly contributor to HLN's "Raising America". She has written for various outlets including Sheknows and Lifetime and is a big fan of cupcakes and french fries.
January 4, 2013 by Army Wife 101 | 9 Comments

9 Comments on A Crazy Night on Schofield…