The book is called ‘Daddy Left with Mr. Army:  A Child’s View of Military Deployment.’ Milspouse author Chandelle Walker shares her inspiration for this book and how it will help military kids cope with deployments.

My name is Chandelle Walker I am a military spouse who recently wrote the children’s book for military kids called ‘“Daddy Left with Mr. Army: A Child’s View of Military Deployment“.’

We are an active duty Army family.  My husband has served our country since 1996 when he joined the USMC and was stationed at Camp Pendleton, CA. We met, by chance, in 1998, while he was stationed there.  After finishing his time in the USMC, he joined the AZ National Guard in 2002.  In 2004, he joined the Army to become a Warrant Officer so he could fly helicopters, which he still does.

After flight school, he was stationed in Korea for a year, without us.  I was pregnant with our 2nd child, a boy (our first child is a girl). After serving there for a year, we were stationed at Ft. Bragg where he was in the 82 Airborne division. He deployed for another year only 6 months after returning from Korea, but this time to Afghanistan.  But now he was leaving behind myself and two children.

He had two more year long deployments to Afghanistan. He returned from his final Afghanistan deployment in 2012. In a 7 year time span, he was gone for 4 of those years! That is a lot of separation for a family in a short amount of time!

We are now stationed at Ft. Hood and besides TDY’s, we should not experience anymore long term deployments during the remainder of his career.

Why I Wrote This Book

As you can see from the above our family understands what military families go through during deployments and family separations.  I have witnessed first hand what children experience and have seen how they feel and what emotions they are going through. Unless you are in this life, it is difficult to truly understand what military spouses and children experience while a spouse and/or parent is deployed.

During our first Korea separation while I was pregnant with my son, I woke up with the beginnings of this children’s book.  I have always loved books written in rhyme and poetry and that is how this book began forming. Line after line continued on in rhyme until it was complete. I wrote most of it that night, but added to and tweaked it throughout the next few years as our family continued to experience deployments.  I completed it years ago, but wasn’t sure what I could do with it. I sent it to one publisher but it was returned. I visited another local publisher in the Fort Bragg area, but they wanted a substantial amount of money for me to publish with them. So I put it aside all while knowing that it was really special and should one day be in the hands of military children and families.

Finally, in January 2018, while my husband was again in Korea for another year, I felt strongly it was time to publish it.  I felt self-publishing was the best way to go for me so I began researching the why’s & how’s & who of self-publishing. I finally decided on a company on January 31, 2018.   I decided that any amount I would have to pay to get the book published would be a great investment for myself, to share our family story and because I felt it could benefit other military families going through the same things as our family. The fun part was that I was keeping this a secret from my husband.  I wanted the book of our Army life and deployments to be a surprise for him! It was difficult hiding it from him sometimes, but it was worth it in the end. It was a long and sometimes difficult process but on December 12, 2018 it was officially available for order! I received my first official hardcover copy on December 24, 2018, just in time to show my family for the holidays.

This book goes through the explanation from the parents as to what is going to happen and why what Daddy is doing is so important. It talks about the sad day Daddy leaves and continues on how the child and the mother navigate life without him and things they do to stay connected. You also see how the child’s understanding of what Dad is doing and why he is gone grows and matures. 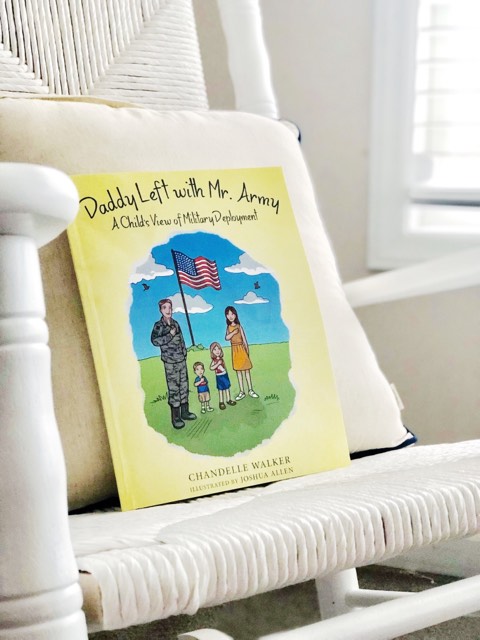 How This Will Help Military Kids

During this deployment my children ranged from toddlers to tweens.  I saw and heard and felt their emotions and recognized what they were being asked to give up each time as military duty called. It is difficult on these little ones and hard for them to fully understand why their dad (in our case) had to leave so frequently and for so long. Not having your father or mother there for the day to day activities and especially for special occasions can be confusing, upsetting & frustrating for these military children. The other parent does their best to fill both sets of parent shoes but the void of the missing parent is always there. Memories are made without them and so many moments are missed that neither the child nor the deployed parent will ever be able to recreate.

As I continue to share this heartfelt story, my hopes are to reach as many military children and families as possible.  I want to encourage reading time together. I want to help bridge the gap between parent and child so we can be more aware of what they see and feel before and during these deployments and family separations.  I want to help children feel heard and to help them know that there are other children hearing, seeing, and feeling the same things as them. And this is not inclusive to just the Army. This is for every military child, for every branch of service that has been asked to do their part in supporting this great country by saying their goodbyes to their beloved parent. When our service men and women are called, no matter what branch, all military children are asked to say farewell, so this story helps us better recognize what they go through during these family separations.

Children from ages 2-11 will love this darling book which makes it easy to understand feelings that they can’t easily explain.

Also included in this book are  tips and tricks to helping a child more easily get through the deployment in the back of the book.  These are all things we did with our children that worked when my husband had to leave. Some ideas could include a ‘Daddy’s Countdown Jar.’  We used marbles to represent each day Daddy was gone. So when the jar was filled up, it was time for him to come home. I also printed out little photo books of Daddy and that child so the children could look at them over and over again to remember him and to see how he loves them.

Another idea we used was ‘Open When’ cards.  We actually did this one for this last deployment when the children were older, 15  12. But it could apply to any age. He made up ‘Open When’ cards for different situations or specific times when the child might need encouragement or praise or special words just from Dad.

My biggest suggestion for the mother or parent not deployed, would be to just take each day one day at a time.  Be patient with your children and remember they are also experiencing the temporary absence of their loved one. Don’t try to make everything perfect.  Just do your best each day. Talk to your children, spend time with them, play games with them and read to them! It won’t always be easy, but make the best out of each day and you will look back and be happy at the growth you’ve made and the strength you’ve gained.

Where You Can Purchase

The book is available for purchase at any online book retailer like Amazon, Barnes and Noble, Books-A-Million, etc., and from the publisher, ArchwayPublishing.

Krystel is the mom of two and an Army Wife. In addition to Army Wife 101 she is the Co-Founder of SoFluential.com a digital media agency that connects brands with the military market. She has appeared on MSNBC ,FOX LA and formerly was a weekly contributor to HLN's "Raising America". She has written for various outlets including Sheknows and Lifetime and is a big fan of cupcakes and french fries.
February 21, 2019 by Army Wife 101 | 0 comments