Home » Featured » Is Your Soldier Ignoring You? Or Did Faulty Military-Issued Earplugs Damage Their Hearing?
Featured

Your spouse may have been issued faulty 3M earplugs by the military, which have been linked to hearing loss, tinnitus, and deafness. This post is sponsored by Gregg M Goldfarb, LLP, who believes that our service members deserve compensation. All thoughts and opinions are our own. 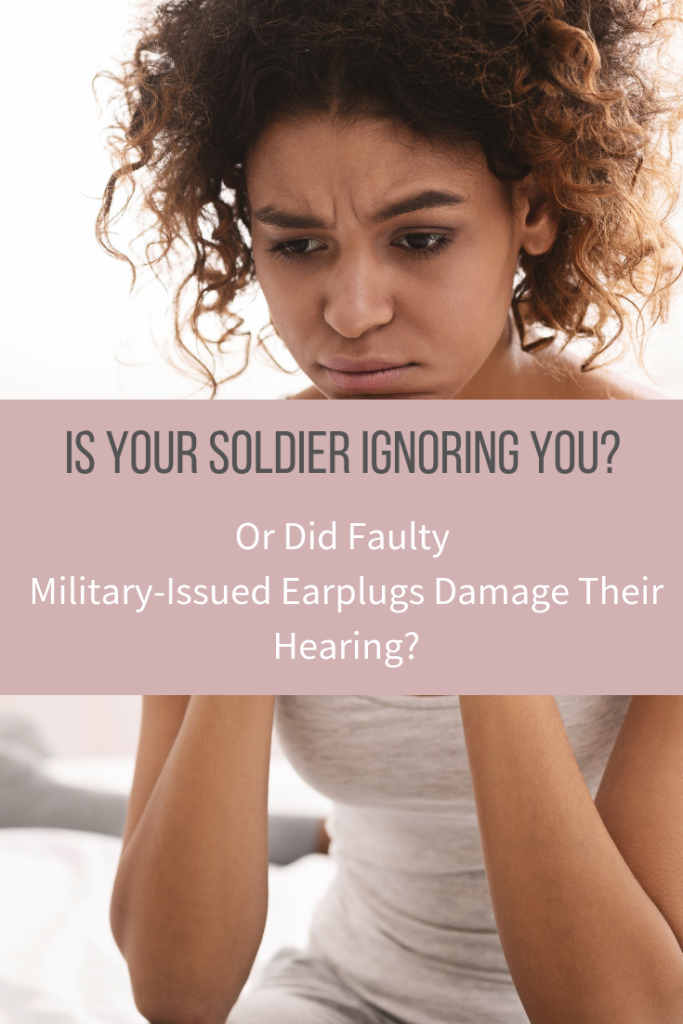 There are jokes about “guys” not listening, but with a spouse in the military, it may not be a joke — it may be due to a real hearing problem.

We recently experienced this when my son shouted, “Dad, I’m trying to tell you something!” Witnessing my child’s exasperation, I chimed in with, “Honey, he’s talking to you.” My husband apologized, responding with, “Sorry, I didn’t hear you, can you please tell me again?”

This scenario happens more frequently in my house than I’d like to admit.

While this could be a case of him or her not listening, it could indicate something serious — hearing loss or tinnitus. These conditions can contribute to irritability, loss of sleep, frustration, and depression. They not only affect the sufferer, but can quickly impact family, friends, and social life.

My husband served two tours in Afghanistan and recently confided, “I think I have tinnitus.” In researching it, I learned something upsetting. For those who served in the military between 2003 and 2015, the cause may be due to defective, CAEv2 yellow/dark green dual-core earplugs ear that were sold to the military by the 3M Company and Aearo Technologies.

As military families, we operate on the belief that their gear will protect them. It’s upsetting to find out that is not totally the case. 3M knew their earplugs were defective and kept quiet! In fact, it took a whistleblower to bring this to our government’s attention. Following a lawsuit last year, 3M paid $9.1 million to the government without admitting fault, and use of the earplugs was discontinued.

It gets worse. To date, service members who were the most affected by this have received nothing as compensation for impaired hearing, tinnitus and — in some cases — deafness!

Is Your Military Family Impacted?

I learned that the most claimed disability in the VA system is tinnitus, which causes ringing, clicking, hissing, and buzzing in the ears. Service members and veterans across all branches

are reporting tinnitus and partial or complete hearing loss. It is especially true for those who deployed to Afghanistan and Iraq with close proximity to firearms, heavy artillery, and rockets. Even if your spouse isn’t infantry, he or she may have been exposed to extreme levels of noise during training exercises and deployments, while wearing faulty 3M earplugs.

How has my military family been impacted? My husband easily has it the worst — he experiences regular hearing issues and discomfort. Additionally our children are highly frustrated when “dad doesn’t hear them,” and it’s hard to watch my husband miss important pieces of conversation in social situations. I can’t imagine how it makes him feel.

It’s upsetting to think that someone, somewhere, knowingly sold faulty equipment to our military, and these life-changing injuries could have been prevented.

What Can YOU Do About It?

If this resonates, you’re not alone. Although the government is not going to compensate directly, individual service members who feel they have been impacted are encouraged to file a claim.

If you’re worried about the cost, rest easy — there is no cost to you. The process is pretty straightforward because the heavy-lifting is done by the lawyers. If the case is won in court or by prior settlement, about 40% of the award goes to the lawyers and, less any costs typically for medical bills and litigation costs, the balance goes to you. Although it might take a while and you may not think it’s perfect, it’s better than doing nothing and receiving nothing.

The easiest way to go about this is to work with a personal injury attorney; remember, there is no cost to you. When choosing your lawyer find one with:

If your spouse hasn’t sought medical advice, he or she should definitely do so. There may not be an absolute cure, but there are certainly various ways to alleviate the situation and reduce his or her discomfort.

For my husband’s situation, I was recently referred to a personal injury lawyer, Gregg Goldfarb.  Not only does Gregg have all the credentials mentioned above, but he also suffers from tinnitus and is passionately involved in hearing loss and disability issues. Gregg gave me the feeling that he will fight for the rightful reward for my spouse’s injury, while respecting and honoring his dedication to serve our country. An added extra on Gregg’s website, is that he features some extremely useful information about the latest in hearing treatment. He covers a number of important topics including explanations of hearing loss, developments in medical technology and devices, treatments for tinnitus, diet and nutrition, and social/emotional aspects.

Remember, there is no obligation to you.

To learn how your spouse can receive compensation to counter the use of faulty 3M earplugs, check out the Gregg M Goldfarb LLP law firm at: http://gregggoldfarb.com/site/listen-up/.

Krystel is the mom of two and an Army Wife. In addition to Army Wife 101 she is the Co-Founder of SoFluential.com a digital media agency that connects brands with the military market. She has appeared on MSNBC ,FOX LA and formerly was a weekly contributor to HLN's "Raising America". She has written for various outlets including Sheknows and Lifetime and is a big fan of cupcakes and french fries.
April 10, 2019 by Army Wife 101 | 0 comments