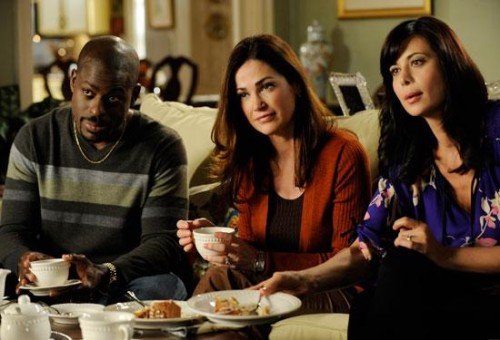 Last night Army Wives returned to our screens and they definitely brought on the action.

The last episode before the hiatus ended with CJ flat lining on the table as she was at the completion of her kidney transplant surgery. It is then revealed CJ went into cardiac arrest but as most of us expected she was revived and pulled through .  In usual TV form she is up and walking around as if she didn’t just die and have major surgery at the same time. Later Major Sherwood and General Holden send Denise and CJ on a weekend getaway.

As revealed Roxy is pregnant with twins and refuses to tame her work schedule until she has a scare which causes her to start bleeding heavily. it is revealed that she has Placenta Previa . Fortunately both twins heartbeats are heard and all is well but Roxy is going to need to cut back. This is great because we want Roxy to have those babies.

From the last episode you should know that Hector has a real problem with Gloria working at the “Hump Bar”. He already has got into one fight as well as chewed out by his Sgt. In last night’s episode Hector once again tries to persuade Gloria to quit her job, but with Roxy needing the extra help Gloria is put into a position of being in charge and tells Hector that she is not going to quit. Again, as we expected Hector goes to another bar where we see him talking to another women. The two begin to flirt and eventually wind up sleeping together while Gloria is calling to try to smooth things over with her husband. So Hector really is a douche!

We don’t see much of them this episode but what we do find out is that David (the Burton’s adopted son) has been secretly seeing his biological dad behind their back.  It seems like the final showdown is coming soon as we seen what appears to be Roland beating someone up in the preview trailers.

All is well with Denise she has pulled through the surgery with no complications and with CJ up and well, the ladies husbands send them on a trip to the beach where they rent a home for some much needed girls time away. During the trip the ladies encounter a man on the beach who asks them if he can buy them a drink. They casually laugh him off by saying “their husbands wouldn’t like that”. This is in my opinion where they went wrong. Never let some weirdo on the beach know you are alone.

Needless to say Claudia Joy goes out to fetch some dinner and in true TV fashion leaves the door unlocked. Denise hears noise in the house and thinking it is CJ walks out to the living room area where it is revealed that the nice guy at the beach is in the house with a gun. He takes both of them hostage bonding both of them in zip ties.

Claudia then scares the shiz out of us when she appears to be going into diabetic shock. Denise convinces the lunatic to let Claudia Joy give herself an insulin shot so he grabs the needles and hands it to her , only for CJ to pull a 360 on him and stab him in the neck with the needle.  In once again dramatic TV fashion Denise somehow manages to grab his gun and shoot him dead. I admit it was a kick arse bad chick kind of scene.

Poor Jackie is just a lonely puppy. She is a lost cause without a party to plan or event to attend. With CJ and Denise out of town poor little Jackie is left on her own.  Jackie finds her way down to “The Hump Bar” looking for Roxy but winds up hanging with Gloria who hands Jackie a drink! *GASP* …did we forget Jackie’s history?

This season promises us nothing but good old fashioned Lifetime drama …well the next episode does anyway and you can see it below:

So those of you who follow me on Facebook know that I was live tweeting while “Army Wives’ was on last night. I sent a tweet to actor Brian McNamara who plays General Michael Holden and look what he sent me back. It’s nothing major but the fact that he took time to respond says volumes!

Did you enjoy last night’s episode?

Krystel is the mom of two and an Army Wife. In addition to Army Wife 101 she is the Co-Founder of SoFluential.com a digital media agency that connects brands with the military market. She has appeared on MSNBC ,FOX LA and formerly was a weekly contributor to HLN's "Raising America". She has written for various outlets including Sheknows and Lifetime and is a big fan of cupcakes and french fries.
June 25, 2012 by Army Wife 101 | 4 Comments