I remember my first Christmas as a new Army wife like it was yesterday. I had a small tree in my townhouse I shared with my sister and just a few presents tucked under the tree. Post office boxes lined the wall to my dining room that were meant to be shipped and hopefully reach my deployed husband in time. My hands were glued to my cell phone in the hopes that at some point it would ring and at any moment I could hear his voice through the static of a satellite phone. 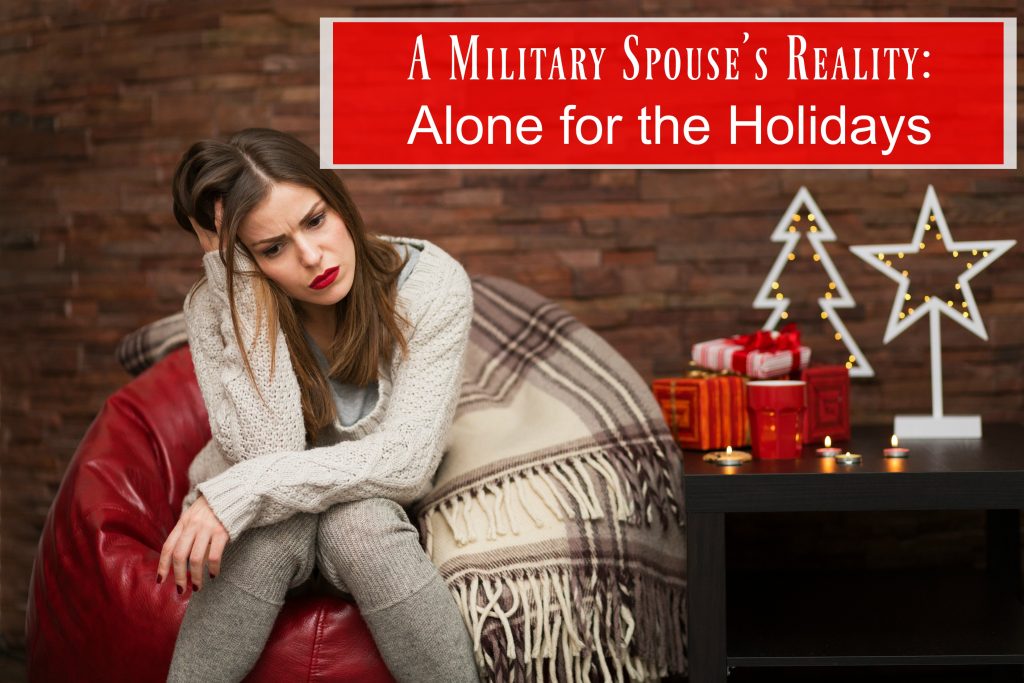 Many of you know what I’m talking about. You’ve had similar experiences and stories to share about dealing with a spouse who isn’t able to be home for the holidays. However, this post is not for you, although maybe you can relate or chime in later with your own stories. I’m talking to that first time spouse, the young one, the newly married or perhaps just experiencing this for the first. Girl, hold onto your big girl panties. It’s not going to be an easy ride.

No one prepares you for what it will be like when he goes. At least, no one prepared me. That could probably be because we didn’t exactly TELL anyone we had gotten married (Yes, we were one of THOSE couples. My mother-in-law still gives us grief over it, good naturally of course.) So I was not ready to deal with the depth and range of emotions on what missing out on our first EVERYTHING pretty much would be like. I was also pregnant and had the roller coaster of pregnancy induced crying fits and emotions to deal with too. It also did not help that we had almost no communication with each other at the time. It would be weeks before I’d hear from him. When I did, lets just say that sometimes the teacher on Charlie Brown sounded clearer.

So why do I tell you this? I tell you, sweet lady who is about to hug her husband goodbye for however long, because I want you to know it passes. I tell you, young wife with children who doesn’t know how to even gather the energy to put up the Christmas decorations, it passes. I tell you, woman who has had to deal with this on more than one occasion- maybe it’s already passed for you before and you’re about to go through it again. It passes.

You may be asking yourself, how? How does it pass?  Well, I don’t have all the answers, but perhaps I have some ideas that will help you get through.

#1 Be honest about how you’re feeling.

TDY’s (Temporary Duty Stations) or deployments over the holidays just suck. There’s really nothing nice to say about them so i’ll just say that. They suck. But sometimes when you look what you’re going to be facing in the eye and acknowledge that its about to suck, it makes the task that much more bearable. Here’s a phrase to borrow from my husband and his friends, “Embrace the suck.” If you haven’t heard it yet, you will. You know it’s not going to be fun, so don’t hide from it and don’t let it control your attitude. Be positive! Remember, it passes.

#2 Surround yourself with supportive people.

At the time my husband left I had no other Army wives I could call friends. I did have family though and was blessed to be able to spend the holidays with them. Surround yourself with as many supportive friends and family as you can. If you can travel, do it! Go home. Visit in-laws. You might feel guilty doing it because he’s not there with you, but to me there’s nothing like good friends and family to take your mind off your worries. I would make a bet that he would much rather you be with your family and enjoying your holiday time than at home eating a whole box of chocolate covered donuts and binge watching Netflix shows. On second thought, take the donuts and Netflix -with- you and make it a viewing party.

#3 Realize it’s not his fault.

Ah yes, here is a sticky point. It’s so easy for us to get caught up in bitterness and resentment towards our spouses when they have to be gone. We quickly can put the blame for the crappy way we are feeling squarely on their shoulders as if they intended to make us miserable. Ladies, i’m not going to beat around the bush with you. Our men signed up for this job and you as his spouse signed up right along with him. There’s a reason they say “married to the military” and that’s because whether holidays come or not there is -always- going to be that chance that he won’t be there for it. That’s why you treasure the time you -do- have together. When you’re feeling really down, try practicing a little grace and realize that it’s not all rainbows and sunshine for him either. He’s probably missing you just as much as you are him.

It’s kind of assumed that you know to take it one day at a time. But in-case no one has told you this, take it one day at a time. Don’t get lost in the number of days left, or the number of days passed. Focus on today. If you have kids- focus on being the best mom you can be for them. I know it gets frustratingly tiring being both mom and dad. So think of how you can just be mom. Spend some time getting to know some new spouses, especially if you are new yourself. Positive and uplifting connections with other Army spouses can be some of the most rewarding friendships you will ever have. Avoid the ones who are constantly negative or bring your attitude down. You have enough to deal with already. Last but not least, forgive yourself. You’re going to break down, you’re going to get upset, you’re going to cry. Go ahead and do it, but realize that tomorrow is a new day and it passes.

About the Author: Lauren Gardner is a military spouse and stay at home mom of four amazing children. When she is not playing Uber driver to soccer practice, football, or school functions she is volunteering with her local PTA and organizing activities for local military spouses in her area. In her free time she enjoys reading, writing, working out and playing with her fur-babies. She is also a notorious StarBucks addict and has a secret addiction to leggings, fuzzy slippers and Hallmark movies.
December 8, 2016 by Lauren Gardner | 0 comments