Love is funny. Never in a million years would I have dreamed that I’d end up with a husband who was younger than I am. Make that seven years younger, to be exact. Take that one step further and I can also say that I never thought I’d be married to a soldier. 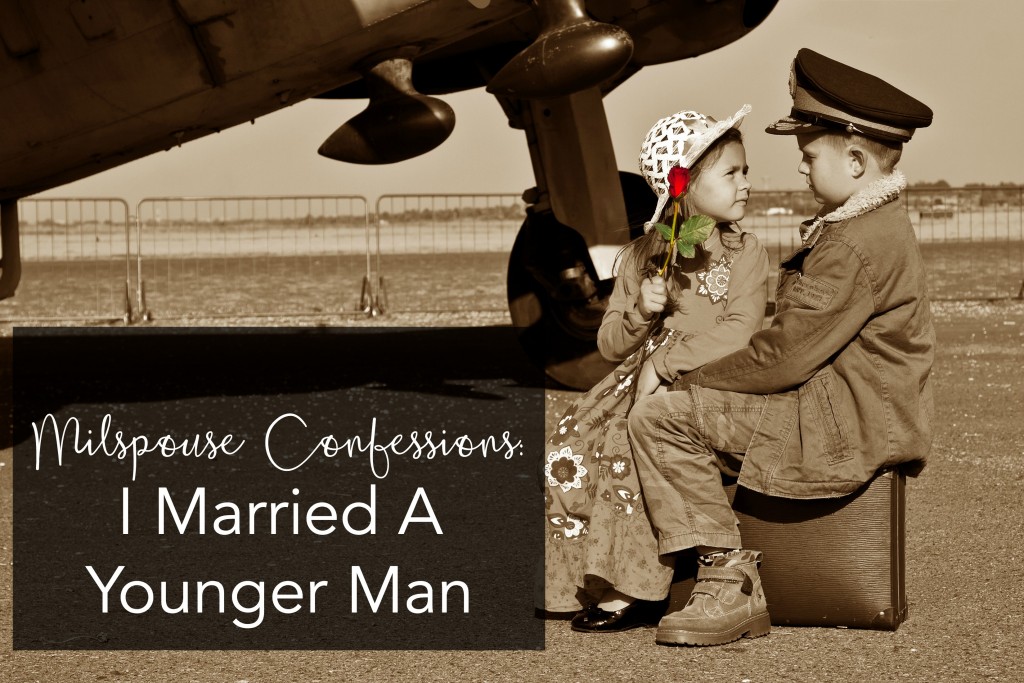 When we met, he was a 19-year-old energetic college student who was loads of fun. I was a 26-year-old graduate student who was trying to figure her life out after a broken engagement and a career change. We locked eyes at a party and instantly felt a connection. He kept saying that I needed to hang out with his group, and I kept trying to find him throughout the party.

Two weeks later, we started dating. I thought a summer filled with lighthearted fun with a younger man would be exactly what I needed after my recently failed relationship. It would be low-pressure and casual. Why? Because he was so young that he wouldn’t want anything serious.

Fast-forward to eleven years later. He is just about to turn 30, I’m 37. We’ve been married for nearly eight years and have two boys. After my first baby was born, we decided that it was time for my husband to be the breadwinner so he joined the Army and I stopped working. I was able to live out my dream of staying home with my children while they were young, we’ve been stationed in Europe, and I became a writer. Life has played out in a way I could never have anticipated.

Good thing I didn’t let age stand in our way.

Our Ages and Military Life

Luckily for me, I have a very bright and youthful spirit. Rarely can anyone guess my age upon first meeting, which is wonderful because I always seem to be the oldest in the room. Not only am I older than my husband, but I’m older than my female friends, I’m the oldest mom on the playground, and I was born way before his co-workers who attend our family BBQs.

For the most part, military spouses my age have children who are teenagers and their husbands are just about to retire. They have been married to the military for years and I still feel like a novice. I feel right at home with my younger friends, even if they are 10 (or more) years my junior.

I am always happy to provide my younger friends with a wise, rational, mature sounding board when it comes to life advice. Additionally, I also love to let loose and show them a good time. Although they’re mostly in their 20s and I’m edging closer to 40 (yikes), I’m still the gal to throw a wine night, suggest a girls’ night out, and I’m the first one on the dance floor.

Honestly, I’ve found in all my relationships that once someone is an adult, it’s personality, not birthdate, that predict whether or not we’ll hit it off. I spark with many people and have given up any preconceived notions of age as a result. It truly is just a number and is more about a state of mind. If anything, being around young energy is like a fountain of youth. My husband, my children and my friends keep me young.

Krystel is the mom of two and an Army Wife. In addition to Army Wife 101 she is the Co-Founder of SoFluential.com a digital media agency that connects brands with the military market. She has appeared on MSNBC ,FOX LA and formerly was a weekly contributor to HLN's "Raising America". She has written for various outlets including Sheknows and Lifetime and is a big fan of cupcakes and french fries.
January 11, 2016 by Army Wife 101 | 0 comments