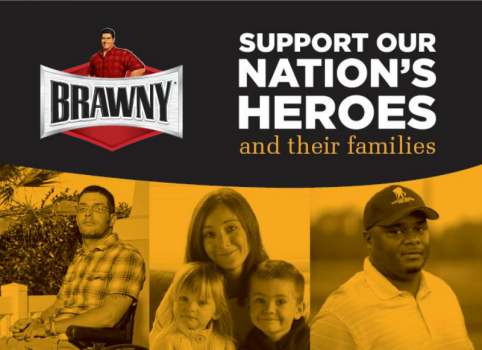 Disclosure: This is a sponsored post on behalf of Brawny. All opinions are genuine and my own.

There’s a saying in the milspouse community that goes” being a military spouse is the hardest job in the military”.  I don’t believe that to be quite true, but I can say that being a military family is one of the most challenging lifestyles.
It was May 2007 that my husband deployed for the first time with the US Army to Baghdad, Iraq. I was a naive 23 year old wife and mom who had never been on her own before and much less with two kids , away from family.
My husband , the kids and I pulled up at the hangar where the rest of the soldiers and their families were. We got out and I helped him remove his items from the trunk and proceeded to walk to the waiting area. Five minutes later I was standing in line with him (and several other soldiers and their spouses) as he signed out his M-16 rifle that he would carry for the duration of his tour in a combat zone. I watched as if it was the norm but inside my mind I could not process that I was watching my husband get a gun that would accompany him to a war for the next 18 months. 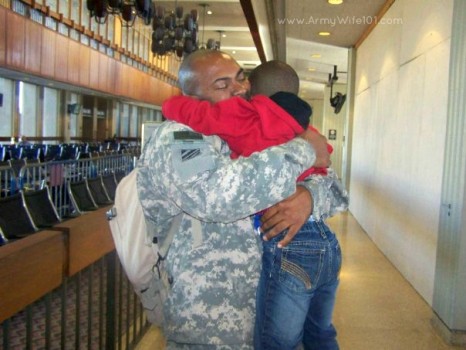 Thirty minutes later my husband’s commander signaled all the troops to say their final goodbyes before they left . I stood strong doing my best to have the kind of strength my husband had and not wanting to cry. In my inner mind I thought maybe I could be a silent support system for the dozens of families surrounding me , some young with new baby’s enduring their first deployment who were sobbing uncontrollably. If they saw me being strong maybe they would be okay too.
The first two months were the hardest. Believe it or not military bases or Forward Operating Bases (FOB) in combat zones were not as organized or technologically up to par as they are now. This meant a constant interruption of video chats, and rushed 15 minute phone calls where privacy, romance and emotional intimacy became a thing of the past. The nights were lonely and the weekends even lonelier. My nerves were frayed every time I thought I heard a knock at my door .

TV was a constant reminder that the public saw happy homecomings but never saw what it took to get to that point.

In the midst of all of this I was taking care of two small children who didn’t quite grasp why daddy was gone for so long and why they hardly got to see or speak to him.
As hard as that year and a half was, it was then that my husband and I learned our true strengths. I bonded together with other spouses from all backgrounds, all nationalities because we all had one thing in common. We were the backbones and the front line defense here on the home front for our men and women overseas. They protected us physically and as military spouses we protected them emotionally so they could protect our country. We understood each other.
My husband was the one who taught our family that despite how far apart we were we had to work together to keep each other strong until the day of homecoming. We created ways to make the time go faster and take care of each other emotionally.
Today we celebrate America’s Birthday. This is a day where we reflect and celebrate the freedom of America and those who protect and defend to keep those freedoms free.
It’s so important to remember and thank Americas Brave. Brawny Paper Towels has partnered again this year with “The Wounded Warrior Project to do just that.

Click Here to leave a message of thanks and Brawny will donate $1 for every one of your who says thank you or LIKES their FB page.

Krystel is the mom of two and an Army Wife. In addition to Army Wife 101 she is the Co-Founder of SoFluential.com a digital media agency that connects brands with the military market. She has appeared on MSNBC ,FOX LA and formerly was a weekly contributor to HLN's "Raising America". She has written for various outlets including Sheknows and Lifetime and is a big fan of cupcakes and french fries.
July 4, 2013 by Army Wife 101 | 2 Comments