Disclaimer: We’ve partnered up with Seventh Generation for this post to bring you this great information.

Did you read the laundering instructions for your spouse’s Army Combat Uniforms (ACUs)? I didn’t. Furthermore, my husband didn’t share any pointers before I washed my first (and 100th) load of his clothes.

I experienced minor blunders: super secret pockets led to washing his pen and notepad; failing to remove patches caused them to curl; and combining with civilian laundry wasn’t a stellar idea. For example, a fellow Army wife mixed loads, and her husband found baby socks affixed to the velcro of his ACUs…oops!

Without knowing, I made major mistakes too. Mistakes that could affect both uniform integrity and my husband’s safety. His safety! 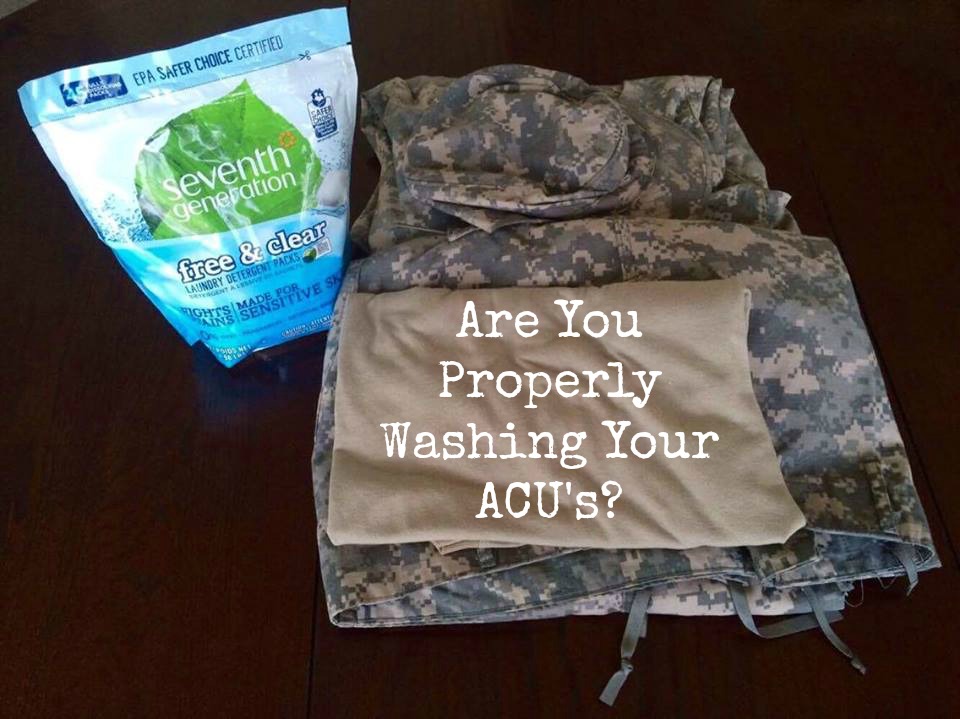 Proper Washing Can Save A Life

Optical brighteners found in traditional detergents can put your soldier at risk. These added brighteners make your clothes appear bright and white by coating them with fluorescent particles. In a military combat situation, uniforms laundered with optical brighteners are visible through night vision lenses, making the brightened uniform a visible target. Keep those ACUs undetectable by using a laundry detergent free of optical brighteners, like Seventh Generation.

In addition to safety, uniforms are expensive and it is important to properly handle and preserve a military uniform. Here are some basic guidelines for washing ACUs:

Separate military from civilian laundry. Prevent color bleeds and wash only with garments used in military field operations.
Remove velcro patches. Maintain their shape and integrity.
Remove items from pockets. Avoid ink stains, damaged documents and more.
Close and cover hook and loop fastenings. Prevent snagging.
Turn jacket and pants inside out. Avoid damage to velcro and prevent flag fading.
Wash in cold water. Preserve the fabric color while cutting back on your utilities.
No optical brighteners. Seventh Generation provides a safe and effective solution.
Avoid bleach/bleach alternatives. Don’t fade camo that is designed to conceal.
Shake out uniform before drying. Do not twist or wring dry the uniform.
Do not use fabric softeners. Prevent damage to the treatment on the uniform.
No dry cleaning or starch. ACUs have anti-wrinkle treatment and these processes will adversely affect the durability of the uniform. 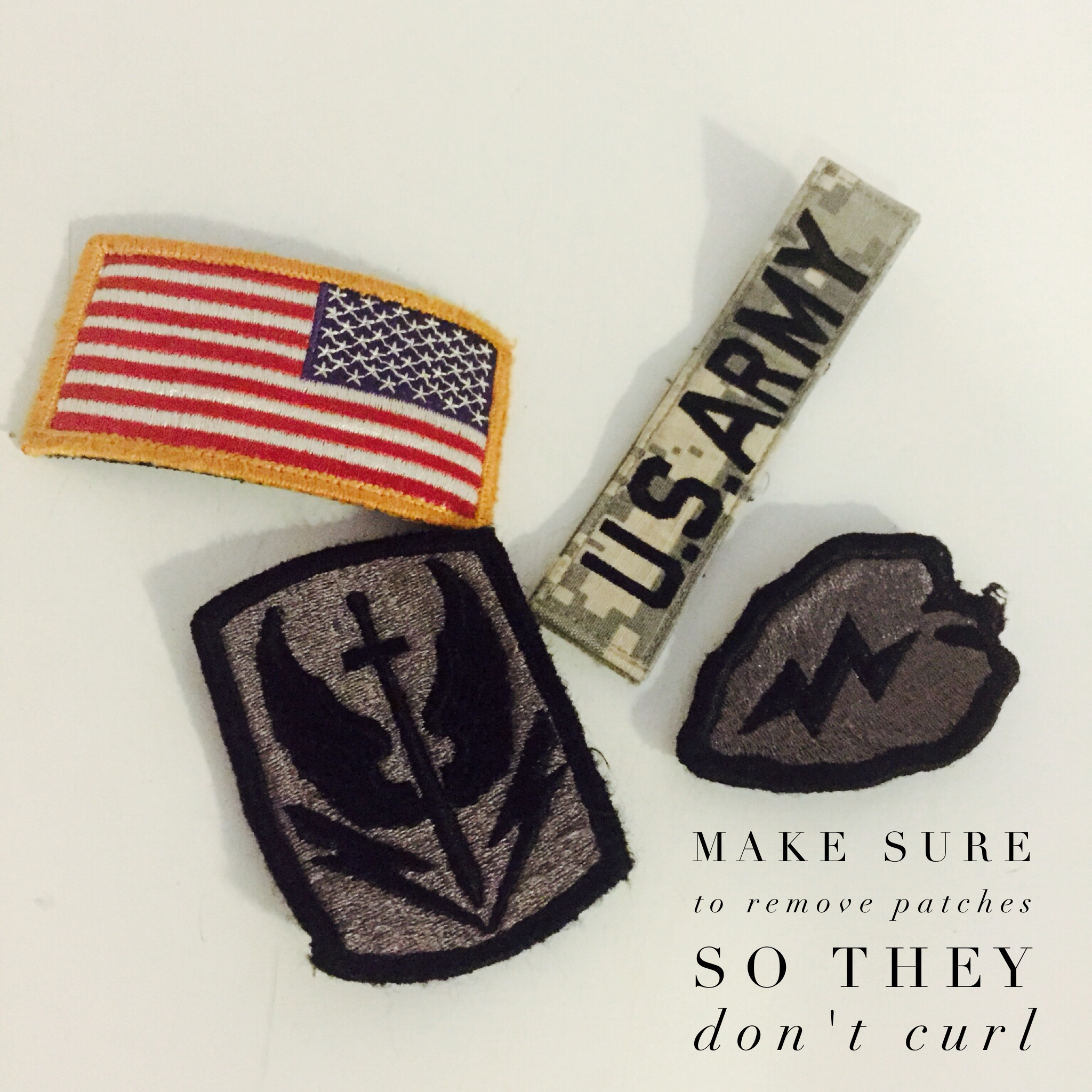 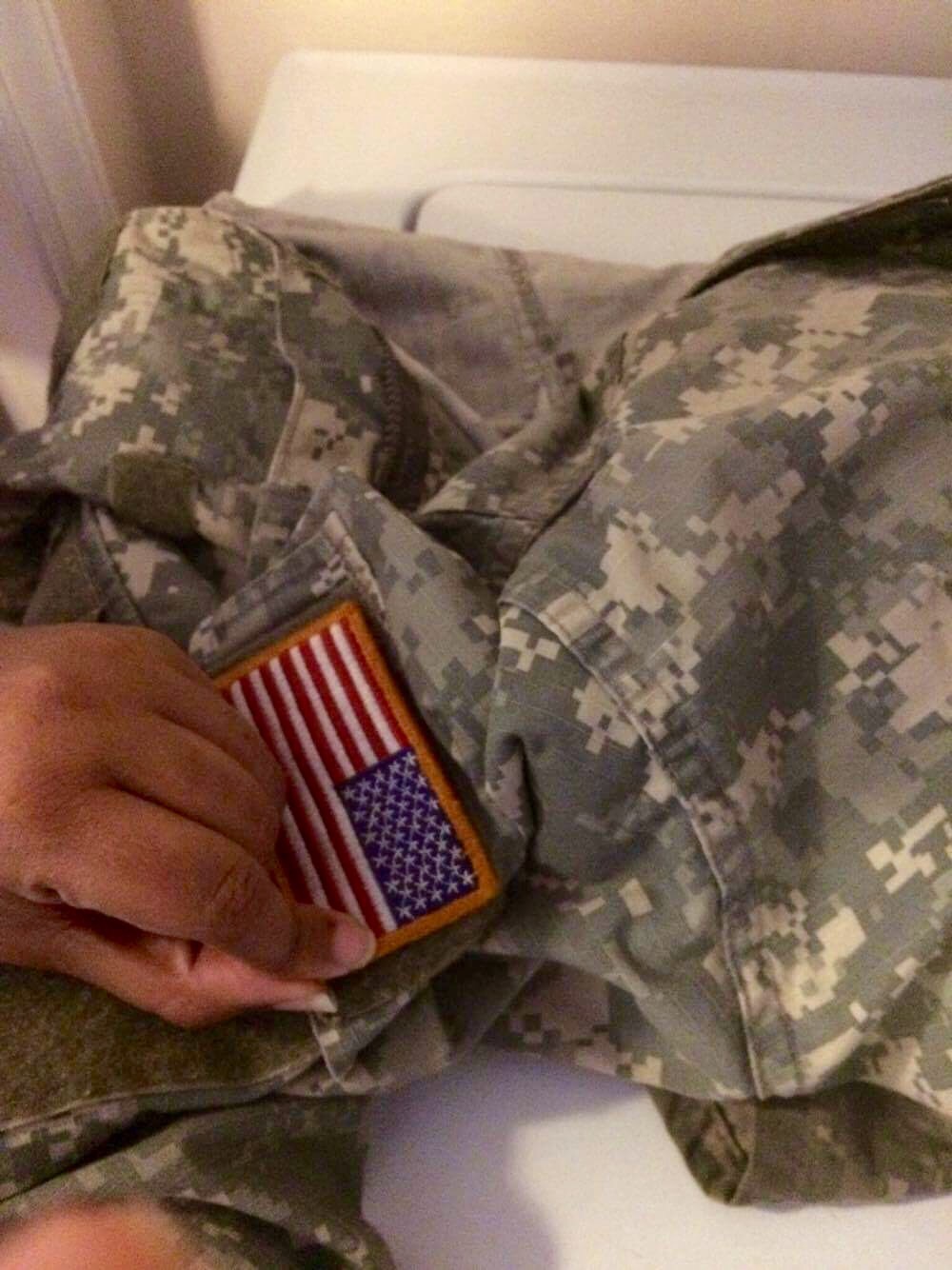 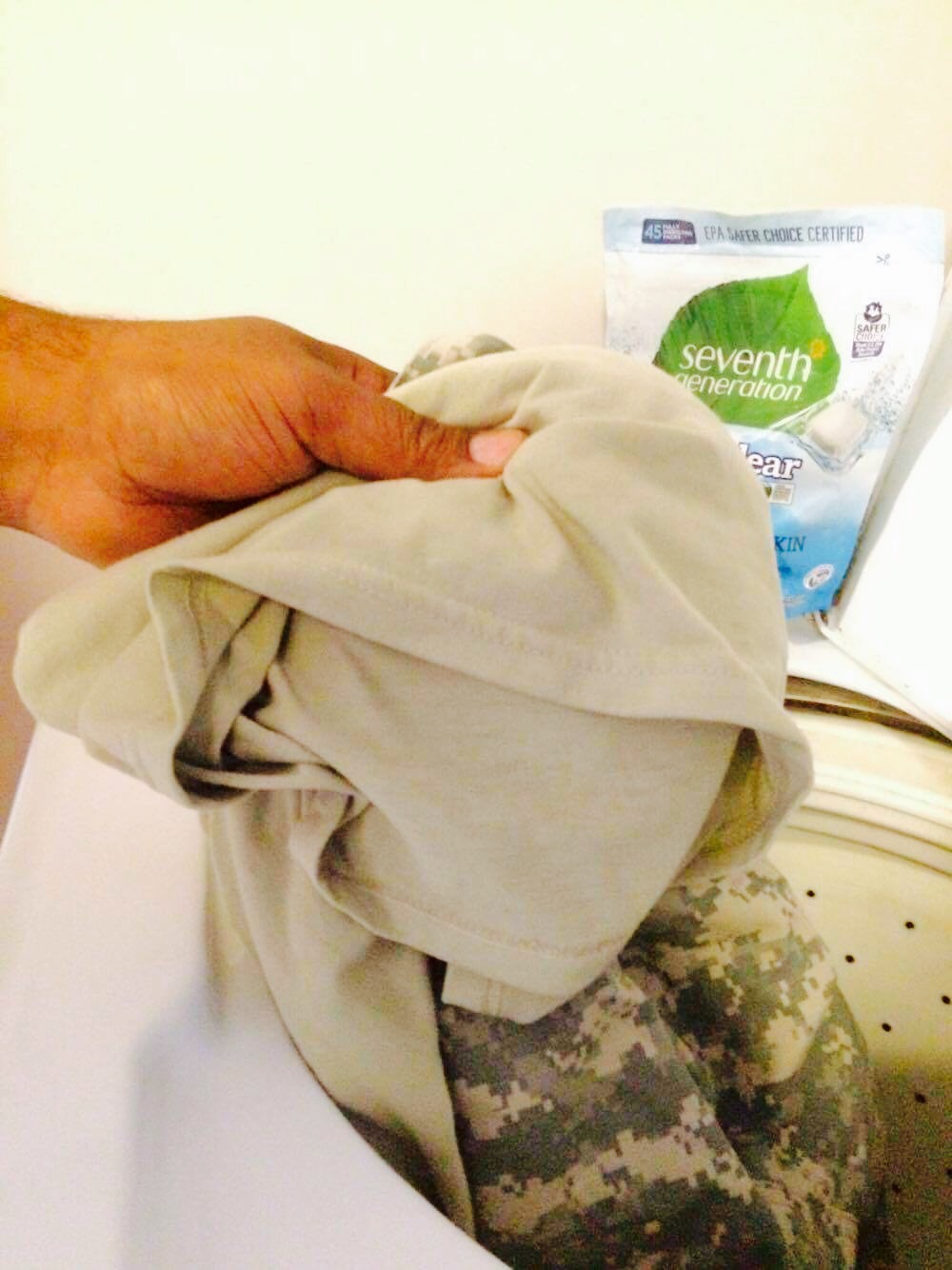 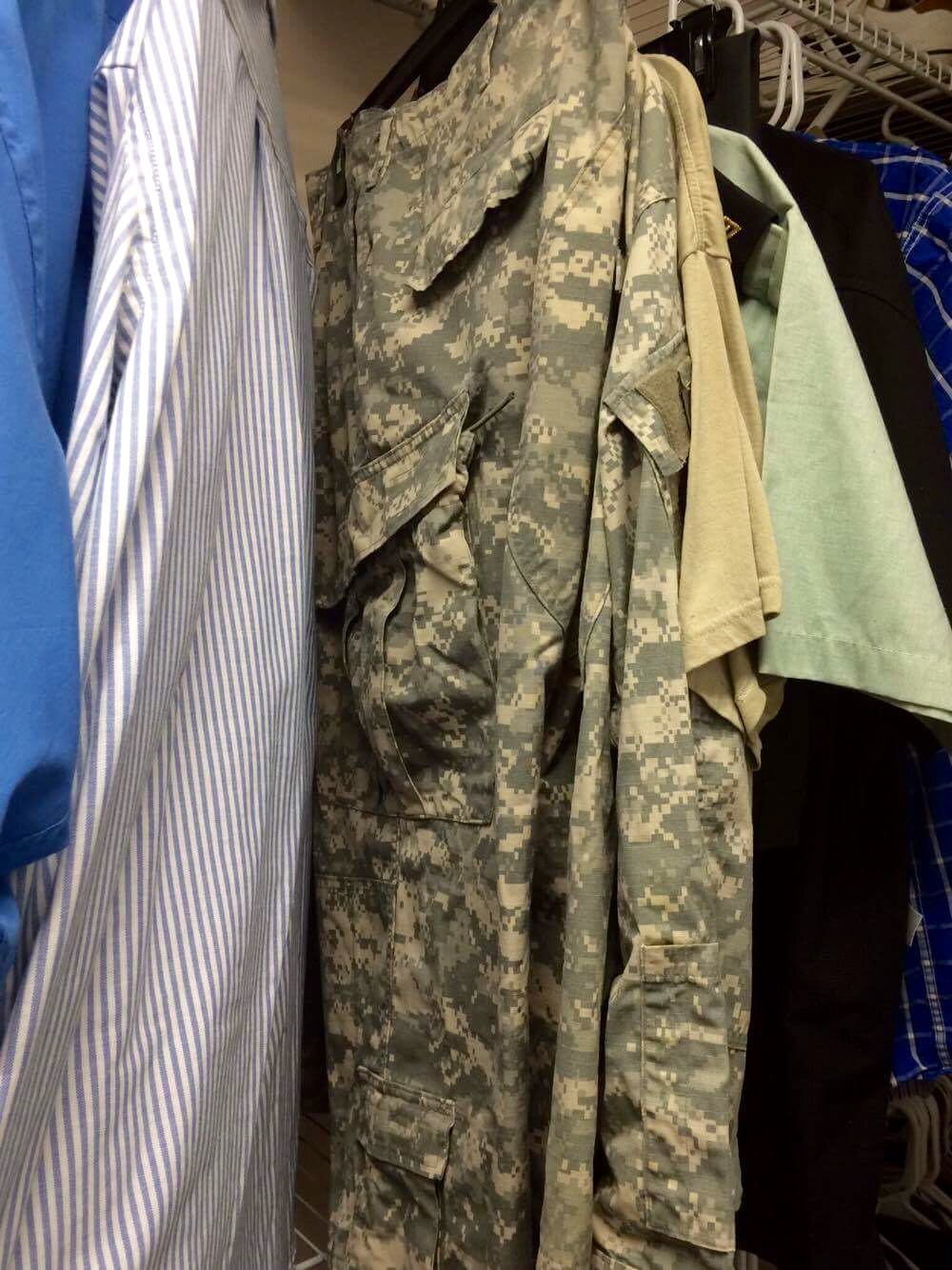 Keep your soldier protected at home and overseas by using only military-approved laundry detergents free of optical brighteners, like Seventh Generation. The company believes that a real clean shouldn’t be an optical illusion. For washing the above uniforms we tried out Seventh Generation’s Free and Clear Laundry detergent packs. We found these to be great because they remove odors well, are free of heavy fragrances, and perfect for sending in care packages.

Seventh Generation is an American company founded in 1988 to provide environmentally-friendly household products that help consumers lessen their impact on the planet. The company attributes the name “Seventh Generation” to the “Great Law of the Iroquois” that states “in our every deliberation, we must consider the impact of our decisions on the next seven generations.”

Krystel is the mom of two and an Army Wife. In addition to Army Wife 101 she is the Co-Founder of SoFluential.com a digital media agency that connects brands with the military market. She has appeared on MSNBC ,FOX LA and formerly was a weekly contributor to HLN's "Raising America". She has written for various outlets including Sheknows and Lifetime and is a big fan of cupcakes and french fries.
August 29, 2016 by Army Wife 101 | 1 Comment