I remember very clearly the day I hit my breaking point in my husband’s 15 month deployment to Iraq. It was in the middle of month 13. I was tired, miserable and he had to keep going on these damn missions that was making a miserable deployment even more dismal.

I was tired of hearing the you can do it #TeamHooah #ArmyWifeStrong crap! Maybe on a good day I was those things, but right now I was fiercely aggravated by this deployment shiz. I was tired of not speaking on a regular basis, I wanted a break from kids, I was tired of not knowing what sex felt like anymore , and I was just tired of everything period. I missed being a wife and wanted to be a regular family. I am sure that sounds whiny but this was my reality at the time.

So what did I do in month thirteen? I lost my damn mind. One day my husband had to go on a mission. All he could do was email me and say he was going on a mission “he promises he will call asap”. Promises to call asap turned into almost two weeks between the mission and a comm blackout. I tossed and turned every single night. I swore I heard the phone ringing on several occasions and could have swore that I even hallucinated at one point. I was losing it. On top of already having pretty bad anxiety that started prior to the deployment , this couldn’t have possibly been a great combination. Being brought up to  feel like showing emotion was weird didn’t help because I felt like I couldn’t really talk to anyone close to me. 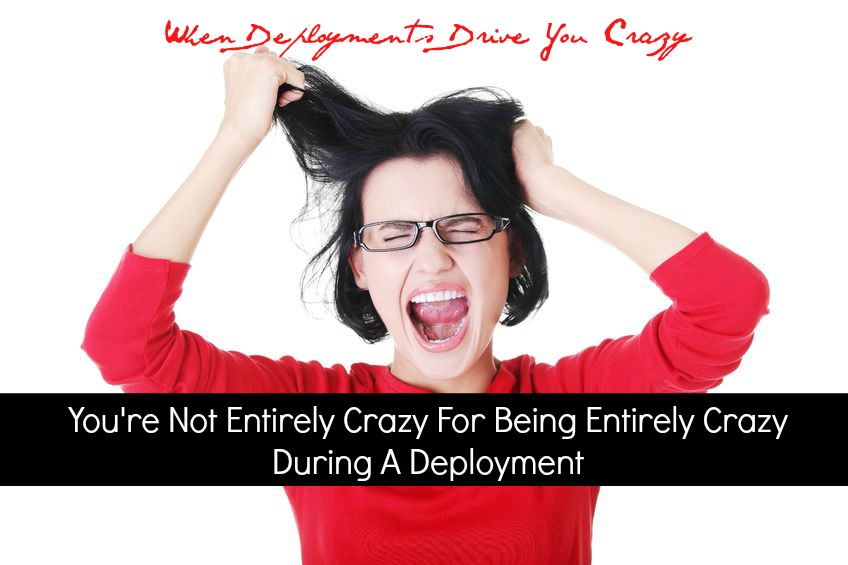 What Did I Do?

I couldn’t call my husband,  I didn’t want to worry my mom ,and my one true milspouse friend was going through her own deployment. So one day a suicide hotline ad popped up online and I was like wow I’m going to call them. In all my craziness I am fortunate to say that although my situation was bad, it was never bad enough where I ever considered ending my life.

So Then Why Did You Call Them?

I did it because they were open 24 hours a day and I knew it was pretty much anonymous. As I mentioned I didn’t grow up showing a lot of emotion and definitely not in front of people, so the idea of being able to cry my life away to a random person whom I never had to speak to again was more than worth it to me. I’m not making light of the seriousness of the what the SH is for, however I did learn that they could also be helpful to someone who hasn’t reached that point but is not in a good state of mind either.

There is too much of a stigma placed on military spouses to completely hold it together during military separations. Even here on AW101 I have shared tips to get through deployments but the reality is sometimes the deployment aspect of this lifestyle flat out sucks, and for some it can be hard to pull yourself out of the deployment funk.

I’m here to tell you that you are not entirely crazy. You may not break down like I did or call “the hotline” but while some may shove Army Wife Strong down your throat just know part of being strong is realizing when you are at your breaking point. For some it may just be a simple, ugly face, snot nose cry and for others it can never hurt to talk to someone outside . I promise you no one in your spouses command needs to know that you went and talked to somebody.

Krystel is the mom of two and an Army Wife. In addition to Army Wife 101 she is the Co-Founder of SoFluential.com a digital media agency that connects brands with the military market. She has appeared on MSNBC ,FOX LA and formerly was a weekly contributor to HLN's "Raising America". She has written for various outlets including Sheknows and Lifetime and is a big fan of cupcakes and french fries.
July 20, 2014 by Army Wife 101 | 0 comments